Why weren’t other religious minorities forced to videotape their Independence Day celebrations in India? 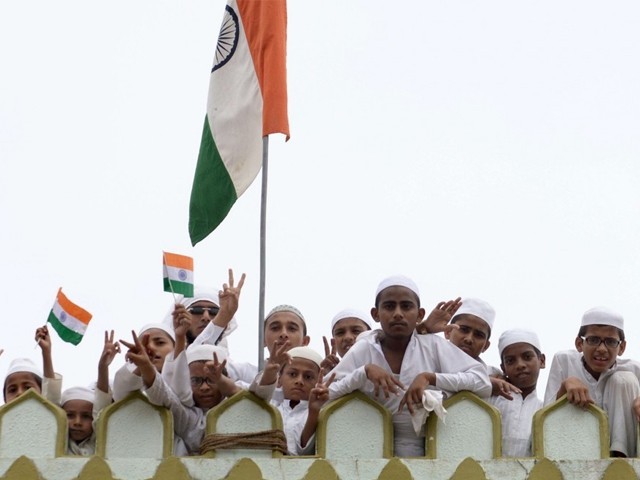 Indian Muslims celebrate Independence Day with national flags on the terrace of the Madrasa Arabia Islamia in the Juhapura area of Ahmedabad on August 15, 2015. PHOTO: AFP

As if ghar wapsi programs and beef lynching was not enough, madrassas in the Bharatiya Janata Party (BJP) ruled state of Uttar Pradesh (UP) have been told to celebrate the Indian Independence Day with great fervour and patriotism.

And to prove that their students are very good and patriotic citizens of India, those who manage Indian madrassas will have to submit videos of how they celebrated the patriotic day. Of course, it shouldn’t surprise us, since after the appointment of a rabid anti-Muslim like Yogi Adityanath as the chief minister of India’s largest state (with a large Muslim population), killings of Muslims suspected to have eaten beef have increased. Now, to be a Muslim in UP is like being a Jew in Hitler’s Germany.

Why is this being done? Why aren’t students of other religious schools being asked to prove that they are patriotic Indians?

Why are Sikhs, Christians and Buddhists in India not being compelled to videotape how they celebrate Independence Day? Is it because all Indian Muslims are considered to be ISI agents? What makes Narendra Modi think that by forcing Indian Muslims to prove that they are good Indians (while carrying out mass killing of Muslims in Kashmir), his party will get the Muslim vote?

Of course, Indian Muslims have been subjected to persecution ever since 1947, when the shock of seeing India divided made the Rashtriya Swayamsevak Sangh (RSS) and its virulent activists even more determined to rid India of Muslims.

In fact, as recently as 2002, more than a thousand Muslims were butchered under the supervision of Modi himself. Because he was suspected to be directly responsible for the killings, Modi was denied visa to visit the US for many years, until he became the prime minister.

Then there is the recent decision of the Maharashtra government to remove all references to India’s Muslim past. They have even removed pictures of Mughal monuments like the Taj Mahal from text books to make impressionable Indian children believe that Muslims made no contribution to the arts, culture and architecture of India.

There have even been claims by Hinduvta fanatics that the Taj Mahal was built by Hindus and not by the Mughal king Shah Jahan. It shouldn’t surprise us if one day they decide to demolish the Taj Mahal on the grounds that it has been built over the ruins of a Hindu temple, as they did with the Babri Masjid.

Modi and his BJP Hinduvta allies know that they can never have a Hindu rashtra (Hindu state) unless they are able to significantly reduce the population of its Muslim minority (comprising of 14.23% of the population). They will try every means to achieve their goal, even if it means killing as many Muslims as possible (if they are not able to convert them to Hinduism).

Modi should ponder what the outgoing Indian vice president said about “a lot of unease, a sense of insecurity creeping in among the minorities in India”. He meant that minorities in India, particularly the Muslims, do not feel safe in India.

“I sometimes become the inadvertent object of political leaders who choose to make me a symbol of all that they think is wrong and unpatriotic about Muslims in India. There have been occasions when I have been accused of bearing allegiance to our neighbouring nation rather than my own country – this even though I am an Indian whose father fought for the freedom of India. Rallies have been held where leaders have exhorted me to leave my home and return to what they refer to as my original homeland.”

Has Modi already forgotten Maqbool Fida Husain, the most famous Indian of his time? The most highly paid painter of India left India and spent the last seven years of his life in self-exile because he continuously received death threats. His crime, of course, was that he was a Muslim who was not considered a patriotic Indian.

So if Modi wants to win the loyalties of Indian Muslims, do not force them to do what they don’t want to do. All you have to do is to trust them, give them jobs, tell your rabid followers not to lynch them on suspicion of eating beef and stop treating them as second class citizens.

And of course, you must order your soldiers to stop killing the Muslims of Kashmir and settling Hindus in the occupied territory with the aim of turning Kashmir into a Hindu-majority state.