A timeless trip to the Mediterranean: How can an ocean have no memory? 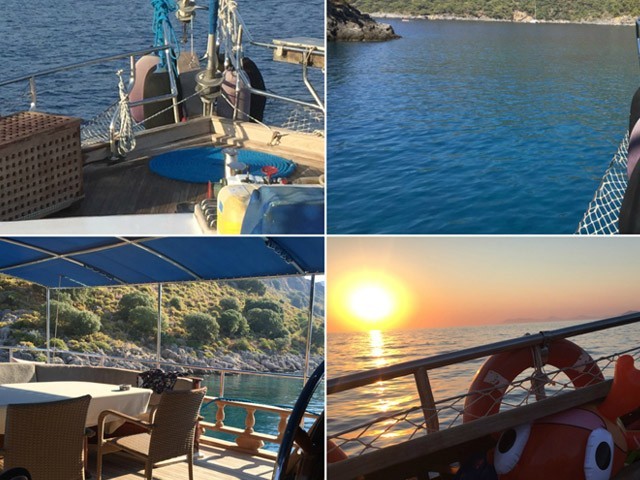 Over the course of the week, I think the least amount of time I spent was being myself.

“Tell you where I’d go. Ziahuatanejo… a little place right on the Pacific. You know what the Mexicans say about the Pacific? They say it has no memory…”

And so the protagonist, Andy (Tim Robbins), tells the narrator, Red (Morgan Freeman), in the movie Shawshank Redemption. Although I have seen the movie countless times since it came out in 1994, it was while I was a teenager in medical school that it charmed me completely. Perhaps it was the concept of freedom and justice that connected with my younger, socially-driven self.

Later in life, the aforementioned conversation between Andy and Red, as well as the ending of the movie, remained with me. The last scene in particular was etched in my mind – where Red walks across the sand on a pristine beach along the Pacific towards his friend Andy who is fixing a boat. For years, I wondered how an ocean could have no memory.

Fast forward to today and the reason for writing this essay – this travelogue is my attempt to describe a trip involving the sea, what I saw and experienced there, the food I ate. Furthermore, it illustrates how I managed to find my own answer to the above conundrum.

The epiphany occurred after a week-long trip on a self-enforced vacation of sorts. Of sorts because in today’s uber-connected world, one takes his/ her work along on vacation, and for me, it was no different. Regardless of the ‘work vacation’, I am glad that I went through with it.

The vacation was on a yacht that took us along Turkey’s coastline, hopping from one island or peninsula to another. The ocean was not the Pacific. Nor was it an ocean to be precise. But the Mediterranean Sea. Semantics aside, the journey was potent enough for me to detach myself from the daily grind and just focus on the ‘self’. While there were not many soul-searching walks on the various beaches we stopped at, they were simply not required, because the backdrop of the Mediterranean was sufficient to invoke the mind. And so, I let my imagination run amok.

After the first three nights spent in the hustle and bustle of Istanbul, I was a bit afraid that the quietness of the outdoors for six nights, especially on a boat and with two young children, would be too much to handle. Our fears were laid to rest right after setting sail, when the kids and the equally eager adults took to the watery sojourn with gusto.

The following is an account of a typical day spent on the trip:

In the morning, soon after the traditional Kahvalti (Turkish breakfast) of bread, cheese, olives, cucumbers, watermelon and chai, we would get into our swimsuits and jump off the deck into the azure waters below. What followed was hours of frolicking in the sea with all kinds of activities, as we had access to floaties, floating mattresses, snorkelling gear, motor boats, kayaks, fishing gear, and more. Exhausted and famished by early to mid-afternoon, we would climb back up on board, where a warm traditional Turkish lunch would be waiting to be consumed.

The chef on board, a young man fresh out of culinary school, did wonders with the fresh produce – be it meat, chicken, fish, vegetables or fruit. The resultant meals were scrumptious, or perhaps the ample exercising prior to any meal ensured hefty appetites. After lunch, we would mostly nap wherever we found a spot on deck, while the skipper would set sail for a few hours prior to finding another lovely spot to stop for an early supper and overnight stay. The dinner meals were never a repeat of the lunch ones (so, no leftovers!). More often than not, the crew would barbecue fresh seafood, meat or chicken that would be served with grilled vegetables. The dinner was always served elegantly, a sustained four to five-course effort.

The darkness surrounding the sailboat and the soulful English and Urdu music (of Coke Studio fame) that emanated from a portable speaker created an ethereal ambience.

While kayaking, I was the sole mariner and the captain of a yacht that had capsized. Marooned at sea, I was looking for solid ground that was not overrun by savages or predatory animals. While swimming, I became one with the fish, sharing the crystal blue Mediterranean with them, albeit they were much better swimmers than I.

During the night time, it was fun imagining being one with the cosmos above – the stars or the almost full moon – reflecting luminescence onto the waves below. Very briefly, during the daytime, I also imagined becoming the yacht; I imagined how it would feel to rock or sway in submission to the vagaries of the sea. I think over the course of the week, the least amount of time I spent was being myself.

Through all of the above, my memories of confounding pasts or uncertain futures were overcome, perhaps even transcended. And thus, all there was to focus on was the moment itself.

Again, I asked myself, how can an ocean have no memory?

With a mind-set, as of this very moment, I think Andy used the above as a metaphor for timelessness. Forgetting the past and future, and just being in the moment was perhaps Andy’s way to redemption. Maybe my trip to the Mediterranean will also redeem me in ways I cannot yet fathom.