I could smell it, I could breathe it – Pakistan was near 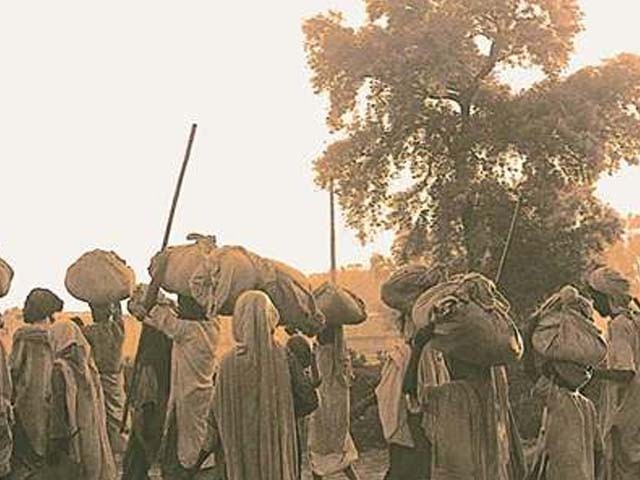 With the charging of the horses, I was home. PHOTO: WHITE STAR PHOTO ARCHIVES

It was very chilly for an August night. The moon played hide and seek behind pregnant clouds of white and grey but the winds were strong and the clouds did not stay above us for too long. We had travelled nights like these before and swayed many times during the course of the journey, but it had led us here and we were close.

The town we had stopped in was unknown. It once had a name but it had long been abandoned when the news of Partition circled the country. They were smart people or maybe superstitious for no one really knew what was to come.

I walked in a small deserted hut with my knapsack tucked over my shoulder and a straw mat over my head. The place was darker than the night with only a silver stream of moonlight entering through the door. I left a trail of dust prints on the floor as I walked across the hut. I set my mat in the corner of the floor and rested my knapsack on the mat. I retraced my steps back and shut the door of the hut. Now it was completely dark.

The windows on the far side of the hut let no light in and I was glad. Since we had started the journey two weeks ago, light had been our greatest enemy. It made them see us. So when we would travel in hoards and walk through the deserts like nomads, they would chase us and pick us off one by one. We could not run fast. There were children with us that could barely walk and the old who could barely see. So we had to let them go.

We did not take the train because we couldn’t afford it and that was a blessing because the trains that came back were not empty but full of the dead. Ayesha was in one of those trains and she was my friend.

With these thoughts of chaos circling my head, the quiet hut echoed with screams and I could feel the walls wet with blood that was not mine and the sounds of hooves and rifles bursting through the doors. I shivered and wrapped myself with my dupatta. I did not need it to cover my face.

I lay on the floor pretending to sleep but I knew better than that. Sleep had not come to me for weeks and it would not until I was in the land of the pure and there I could sleep for days under shades of trees that blew soft cool winds at my face. So I tossed and turned a little bit until I gave up completely.

We had been traveling a long journey with little food during the trip. We ran out of supplies last night, so all I could do was scavenge little items through villages across Punjab. It was enough to keep me going but never enough to completely satiate the hunger, and when quiet nights like these were present, my hunger would announce itself again.

I decided that waiting to pass another day because the light would come soon was a waste. The winds that barged against the door and the clouds that covered the moonlit sky flew from Pakistan – I was certain. So why not follow them?

My mouth was parched and it felt like my tongue was made of sandpaper. The dust around me did not help and I stood up. I think I was anxious more than I was thirsty so I packed up my bags and made my way out of the hut.

The sky was still inky black but behind me the sun had started to break its way through the horizon. The hunger caused my weakness and the thirst killed my drive to walk but I knew it was a matter of time before I passed the border. Then everything would be right again.

I had left my mat in the hut because I was certain the next time I slept it would be on soft cushions with a pillow under my head. That made the walk a lot easier. The mat was a burden and made us visible from afar. When we travelled, that’s what usually gave us away and it was easy for them to differentiate between the refugees and the townsfolk.

The sand beneath my feet was warm but I felt it become cooler each step I took. It was the grace of the land of the pure perhaps. I could not explain it any more than I have just now. We seemed to be close.

In front of me, the horizon stretched for miles. I could see exactly where the sky met the sand and I followed it religiously.

“When the horizon ends and the trees sprout up, you are in Pakistan,” Chacha had said. “It’s a long journey there but a life of peace after.”

“Pakistan is like jannat (heaven),” Chachi had said. “Kashmir has mountains that kiss the sky and people live in clouds there. There are lakes in the heavens like in the stories that Maya reads!”

I could already hear the thwarting welcome. We beat the Hindus here before they could catch us. We made it across. We made it alive. The roar of the crowd in my head deafened me.

Along the clear straight horizon, I soon saw a discrepancy. The straightness had bulged irregularly but the bulging was not a tree. I walked faster and closer to it and soon realised it was a well.

The thirst that had never subsided awoke everything in my body. With the knapsack around my shoulder, I hung onto my dupatta and made a run for it. Sand flew everywhere as I left a trail of dust behind me and made it to the well.

I pulled on to the rope and the bucket under the water creaked its way to the top. I dislodged the bucked from hook and set it on the ground – my mouth watering greedily. I dipped my hands in the pail to drink but the water that I cupped was crimson.

I smelled the water before I made my lips taste it. It smelled like dried metal. I looked in the well but could not see anything. I let the pail go again and waited for it to hit the water but it did not. It fell with a thud on what felt like a sack of potatoes dipped in a puddle of water. I pulled the pail up once again and the water was still crimson. I emptied the bucket and looked under it to see how wet the pail was from below. The bottom of the bucket had thick red blood smeared across it. Pieces of skin and meat stuck to it like glue.

I wanted to vomit but I had nothing to throw up. I set the pail on the side and sat against the well crying. My salty tears were the only thing that touched my dry lips.

The land of the pure is close, I reminded myself. My stomach growled.

It growled once again. I sighed. It growled once more but even louder and longer. And again, but it did not stop. Behind me where the sun was still making its way across the sky, I saw two dots in the far horizon.

My eyes shot wide and like a reflex, I made a run. All the fatigue and hunger escaped me as I sprinted into the darker part of the sky. The hooves of the horses grew louder and louder and I knew it was only a matter of time before they caught me. But just as suddenly as the hooves had arrived, they stopped. I did not stop and I ran until my heart could beat no faster and I fell immediately on the ground catching my breath.

The dust settled and it had been minutes since the hooves had stopped. They had stopped at the well. They were inspecting the wet sand around the well. They saw the blood on the bucket. Maybe they even pulled out the body from the well. It was a matter of time before they…

The hooves started again and my breath was still not recovered. My lungs were tired and my heart almost gave up.

But I could smell it, I could breathe it. Pakistan was near. They could not stop me!

I made a run for it again. I dropped my knapsack to lessen the weight. Everything was a burden now. I did not need it anymore. This was it. Either my head was to be on their spear or I was to be across the border. There was no in between anymore. We made it this far.

With each step I took, the horses leaped closer. The sun had brightened up the sky enough for me to see everything. The horizon kept extending further and the horsemen kept getting closer.

One of the horseman cried for me stop.

I lunged forward even more.

The other horseman said to wait.

I screamed back at them.

The hooves were behind me.

In front of me.

I fell to the ground. The horses stood in defiance. The sand went in my eyes and my tears mixed with my anger. I wish I had jumped in that well. That’s probably what the girl before me did. Save your honour. Die with dignity.

Both the men got off their horses. I screamed once again.

“Don’t touch me, you dogs! Don’t come near me!” I picked a handful of sand and threw it at them, rolling in the dust.

One of the men tried to grab me. I screamed again and he tried to talk over me.

I recited it in Arabic.

I recited it again.

“Right here,” the man close to me answered.

In the daylight, the crimson red colours of my white shalwar kameez burnt bright. It was like a pattern now, made from the hue of my family’s blood. The man gently picked me up and swung me over his horse. I fell on his back and the wind picked up and the hooves grew louder and the sun shined brighter.

In the glistening of my tears, I felt it. We had made it long before the night started. With the charging of the horses, I was home. I had been home.