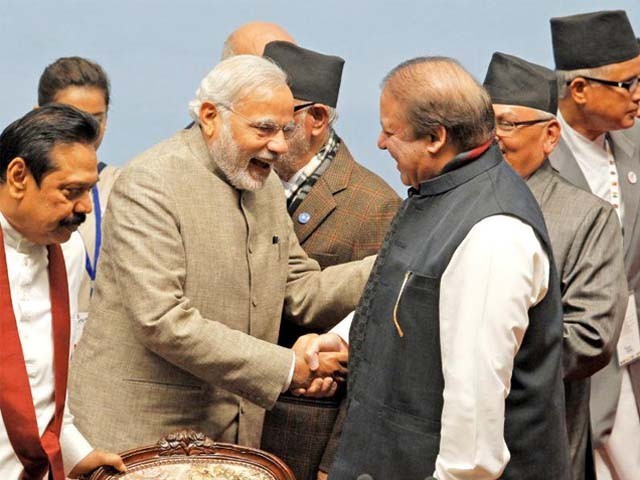 The battle lines have been drawn. Nawaz is out flaunting his muscles on the street, and his choice seems clear – defiance over acquiescence. But to what end?

One possibility is that the power play is simply intended to gain political leverage and bargain relief from those the former prime minster (PM) feels have vindictively disarmed him. But two factors refute this theory – Khawaja Asif and Mushahidullah Khan.

We all know the perversity with which Asif is viewed within the General Headquarters (GHQ), and the comments that led Khan to be scapegoated and removed from his ministry. The appointment of the two into the cabinet clearly betrays a larger agenda on hand, a defiant thrust for civilian supremacy. And perhaps we were just fools to expect anything but. The disqualification of Nawaz on July 28th has instilled newfound impetuous within the former PM who is now consolidating control on two fronts – the streets and the Parliament.

It seems that the amalgamation of the two, a potent mixture and one seldom incorporated before, is being nurtured to provide enough capital to push through invidious policy decisions and secure a lasting legacy for the thrice incumbent and now thrice humiliated head of state.

But what legacy is the elder Sharif trying to secure? Besides metros and motorways, what does Nawaz really have, or want to give? The truth is, no amount of infrastructure development will contravene the memory of three unfinished tenures ending unceremoniously on charges of corruption – charges that happened to be quite convincing as well, at least on the latest occasion. For now, that seems set to be his lasting legacy.

However, Nawaz has always had something else up his sleeve, something he had always wanted to implement, something that was intended to define his era and usher an epoch of economic upheaval and prosperity. That something was India.

Over the past two decades, India’s emergence as one of the strongest economies in the world has prompted the appearance of an alternative school of thought within sections of the Pakistani intelligentsia regarding how the country should deal with its neighbour.

Members of this camp promulgate a new and pragmatic approach towards India, and a break from the Kashmir-centric policies of the past. The assertion is that being the status-quo power in the region with a larger economy and greater military strength, India has no reason whatsoever to compromise on major points of contention such as Kashmir, Siachen and Sir Creek. Thus, beating the drum on said topics does not only fail to bear any fruit, but its greater impact of further empowering the right-wing forces in India, due to the perpetual tension between the states, makes it highly counterproductive. It is more prudent then to place these more incendiary issues on the backburner for the time being, whilst making trade and normalising relations a priority.

In this regard, the Sino-Indian equation is presented as an appropriate blue print. The two countries share a boundary dispute as old as Pakistan itself, a dispute that incubated armed confrontation in 1962. Even today, soldiers from either nation stand eyeball to eyeball in the Bhutanese region of Sikkim, essentially on the verge of another conflict.

Despite the vitriolic nature of the relationship, however, a strict dichotomy between territorial disputes and economic cooperation has been maintained. Today, the trade value between India and China is estimated at a staggering $70 billion, and that figure is expected to rise. On the contrary, bilateral trade between Pakistan and India is valued at a meagre $2.7 billion. The rigid policy of seeing India through a Kashmir-only lens has ossified economic cooperation, leading South Asia to be one of the least integrated regions in the world.

A bilateral study commissioned by the Trade Development Authority of Pakistan (TDAP) elucidates the colossal potential for commerce between the two countries, stating that trade could reach $11 billion if relations were to normalise. Furthermore, studies show that Pakistan’s GDP could see a 2% surge in merely three years as a result. To put that into context, GDP since 2013 has grown between 1.5 to 2 %, depending on which estimates you want to believe. Normalising trade relations would have then doubled growth during the said period, making Pakistan one of the fastest growing economies in the world.

Simply put, the exposition encourages a shift away from a security-based foreign policy approach towards a more holistic economic one. Most of those who envisage it now see Kashmir as a lost cause. Others consider their proposed approach as a long-term means of eventually achieving a favourable resolution in Kashmir, by integrating the sub-continental economies together and gaining some leverage over the presently ascendant India.

Whichever one of these sub-groups Nawaz belongs to remains unclear. Yet his core affinity with the general tenements of the aforementioned school of thought is now undeniable. The infamous Ufa declaration serves as a perfect example of this, where Kashmir was evidently left out of the joint deceleration. The eagerness exhibited to attend Narendra Modi’s inauguration in 2014 and several other overtures made towards India during his past two tenures, despite the annoyance of the establishment, further back the claim that Nawaz sees the normalising of relations with India and the economic alleviation stemming from it as the means of salvaging his legacy.

Unfortunately for Nawaz, whilst opinion makers in the media and intelligentsia largely promoted economic rapprochement and the average voter no longer found appeal in the anti-India rhetoric, the most important stakeholders in the Pakistani establishment remained uneasy with such a radical change in the nature of Pakistan’s foreign policy alignment. And so when the first dharna truncated the then PM’s political capital in 2014, he was forced to relinquish the reigns of his foreign policy to the GHQ and abandon pursuit of his reformist agenda.

Now, Nawaz has been provoked back into action. No longer confined by the restraints of premiership and fear of losing his seat, Nawaz has installed a foreign minister that is emblematic of his desire to steer the ship in his own direction. Of course, the whole move is just a petty gesture to irk the boys in Pindi. But one hopes that there is more substance to it than that, and a last ditch attempt is made to salvage some foreign policy space for the civilians.

It remains a mammoth task, what with the limited diplomatic experience the new foreign minister possesses and the fight for survival the PML-N leadership finds itself in now. Added to the mix is the jingoist right-wing regime currently incumbent in India which does not seem to be a reconciliatory mood. But stranger things have happened in politics. And perhaps all we need now is a step in the right direction.

If Nawaz succeeds at building a strong (although fallacious) narrative of victimhood and Asif manages to draft an effective foreign policy strategy with input from the erudite likes of Sartaj Aziz, such progress may not be too ambitious a postulation. And in the process, if enough of a foundation is laid for future civilian set-ups to build upon, Nawaz may even be able to salvage some part of his legacy in the scrolls of history.