Why the creation of Pakistan does not negate my Indian identity 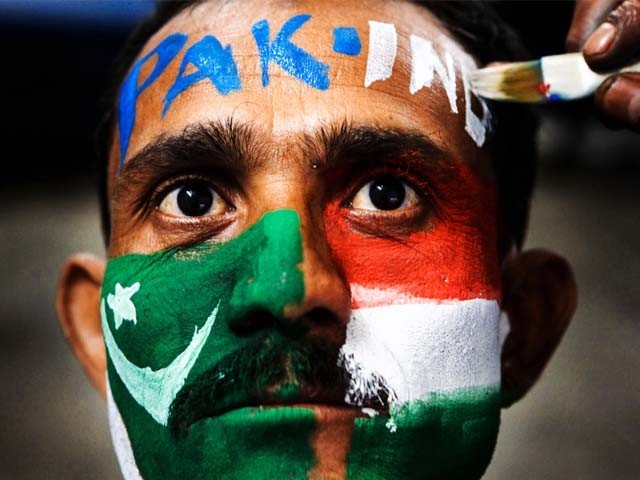 A cricket fan gets his face painted with the colors of the Pakistan and Indian national flags ahead of the ICC World Cup semifinal match between India and Pakistan, in Gauhati, India, Tuesday, March 29, 2011. PHOTO: AP

In fact, during the past thousands of years, this mass of land has very seldom been a unified political entity. And yet, there is something which loosely unites the inhabitants despite their substantial religious and at times even ethno-linguistic differences. After all, let us not forget that more than 200 languages are spoken in India.

There is something, perhaps difficult to articulate, which enables this huge stretch of land to be called India irrespective of various political shapes it has assumed over thousands of years.

My country Pakistan was created only 70 years ago. In my eyes, the current political landscape consisting of India, Bangladesh and Pakistan is just one of the many political permutations the Indian subcontinent has witnessed over thousands of years. This current political formation does not mean that I have ceased to be an Indian.

Yes, at this point, I will say that I am a proud Pakistani. I opened my eyes here and I love it intensely despite the fact that I have often been severely critical of the way things are being run here. But at the same time, I would also like to say that I have an Indian identity as well.

I am the heir to the same rich past and I have the same claim to India as those who belong to modern political India. It is this great common heritage, underpinned by the idea of India independent of political configurations, which unites me with those who live in the present political entity of India. It is our common heritage irrespective of our different political, and for that matter even cultural differences – because modern political India also has many sub-cultures which differ substantially from each other – which unites us.

The political Pakistan means the fostering of a completely new identity and a complete divorce from the past. For them, their past starts from the point their ancestors converted to Islam and their identity morphs into something concrete only after the creation of Pakistan. And this group, consisting of so-called nationalists, is also wary of ethnic identities and aligns itself with the state cultivated narrative of “one Pakistan, one nation”.

On the other hand, the Indian right-wingers think that since Pakistan became a separate state, their country was “partitioned” and an unforgivable sin has been committed. By creating Pakistan, its inhabitants have divided mother India. They keep on talking about the glory of the Indus valley civilisation and mention India as a historically single political entity which in 1947 was divided along religious lines.

Well, needless to say, I disagree with both parties. My premise is that people have multiple identities. I am a Pakistani, a Punjabi, a Muslim, and of course an Indian in the sense I have mentioned above. In fact, we all have multiple identities. At times, one identity may become dominant due to certain circumstances and may even take on a strong political expression, such as a demand for a separate state. However, even if one does so, the other identities do not simply disappear.

So in my case, my Indian identity is there despite my Pakistani identity. I may not consciously ‘choose’ it, but for me it is not only a matter of choice, as it is an identity shaped by history and culture transmitted through generations. It is that common historical heritage which binds me together with those who live in the neighbouring political India.

I have been fortunate to know numerous Indians at both of my alma maters, Cornell University and Syracuse University. Some of my best friends are Indians and I am amazed at how much we have in common despite an apparently ‘hostile’ political situation between the two countries. And they do not belong to North India only (as it is often said that North India is culturally closer to Pakistan) but from the South as well. It is this commonality which transcends political and even ethnic and religious differences which binds me to them. I do not think of them as foes but as my brothers and sisters with whom I share a great common heritage.

And yet I will not apologise for Pakistan, as it is my country and I opened my eyes here. I will nevertheless reiterate that the creation of Pakistan, at least in my eyes, does not negate my Indian identity and origins. I would like to remind all those who are bent upon imposing the Arab Wahabi culture on us that it is alien to us.

Today, as our countries turn 70, I believe that realising our common identity is important, as it will lead to the erosion of bitterness. Yes, modern Pakistan and India are a reality, but then so is our great common heritage. Yes, it is important for us to be loyal to our political states, but at the same time not overlook the joint heritage.

There is an overarching identity which unites us despite our political differences. I sincerely wish we acknowledge that and move forward as independent but friendly political states.

I am a Pakistani Indian…