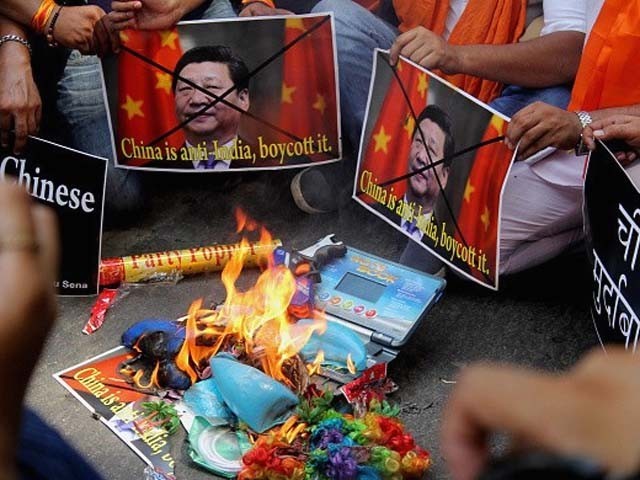 An Indian minister is calling for a products of Chinese products ahead of the Diwali festival. PHOTO: GETTY

As the standoff between the Indian and Chinese troops in Doklam in Bhutan continues, the clamour to boycott Chinese goods in India is rising. The Rashtriya Swayamsevak Sangh (RSS) has organised a 15-day ‘Boycott Chinese Products’ campaign.

The RSS mouthpiece, Organiser, says the nationwide campaign is to raise awareness against using Chinese goods. The Swadeshi Jagaran Manch (SJM), an RSS affiliate, claims that the campaign has received huge support. A rally has been planned on October 29th at Delhi’s Ramlila Maidan to conclude the campaign. For some, boycotting Chinese goods is now the ultimate way of proving his or her credentials as a nationalist. And nationalism, with its twisted definition today in India, has come to good use for this government.

Be as it may, the boycott of Chinese goods comes at our own peril; it will cost Indian jobs, cost the Indian industry immensely, and as a result, cost the Indian economy, which increasingly appears to be in the sick bay.

But to those who lead the boycott, for profit or otherwise, and to those who believe in the boycott, a caveat is need here. Boycott of goods in India has special historical significance. We remember the Swadeshi Movement against British goods led by Mahatma Gandhi. It is justified to say in defence of the Gandhi that a colonial economy is structured differently, is extractive in nature, and prevents industrialisation. The economic interactions and transaction of a free country are vastly different.

Nikita Khrushchev buries ‘the world’ and then Soviet Union itself

Forty-two years ago on October 13th, Khrushchev, the then premier of the Soviet Union, when addressing the United Nations, is reported to have famously banged his shoe on the podium and told the world,

Khrushchev’s threat wasn’t a military threat but an economic one. Economic figures of the Soviet Union were indeed spooking Washington and the free world. It was allegedly growing twice as fast as the western world, and almost three times faster than the United States. For economists, this wasn’t outlandish. Wassily Leontief, in his article, ‘The Decline and Rise of the Soviet Economy’ published in Foreign Affairs (January 1960), said “a collectivist, authoritarian state” that directed resources “with determined ruthless skill” would grow faster than any other state. Yet just 20 years later, everything collapsed for the Soviet Union.

How is the collapse of Soviet Russia relevant to boycott of Chinese goods?

Of the many reasons attributed to the collapse of Soviet Russia, Paul Krugman’s has the most logical and apt explanation. Krugman, in his article, ‘The Myth of Asia’s Miracle’ published in Foreign Affairs (1944), says every country has a finite amount of resources, such as iron ore, capital, technical knowhow and skill sets that it can garner and marshal. The once spectacular growth of Soviet Russia was “based on expansion of inputs” and not because of “growth in output per unit of input”, and therefore, “inevitably subject to diminishing returns”. Explaining the same in simpler terms, Krugman says,

“A man with a bulldozer can dig a ditch faster than one with only a shovel, but he is not more efficient; he just has more capital to work with.”

Chinese goods are cheaper because the average Chinese worker is more productive than say the Indian worker or one in the United States. Boycotting Chinese goods would mean that when we produce the same set of goods using more resources, such as manpower, capital and raw materials.

To cite another example, some days ago, a newspaper report stated that despite worsening relations with a neighbour, Indian suppliers of surgical equipment “eagerly await the next consignments of surgical instruments from across the border”. The reports also states,

“Indian artisans sought to compete with their Pakistani counterparts but eventually gave up. Setting up an industry having this technique will entail substantial cost.”

Boycotting Chinese goods will hurt China, but we should realise that we will get hurt equally bad.

This inevitably leads to the ‘Microchips, not potato chips’ debate of the 90s. Faced with a growing trade imbalance, the clamour to devise federal programmes that would lead to the production of high-value items like microchips against lower value items such as potato chips, found favour in the United States. It is best captured in the exchanges between Lester C Thurow and Krugman. Thurow predicted doomsday unless the United States became more competitive. Krugman rubbished such fears. Nations, Krugman said, don’t compete like firms. Rather, their economic well-being is determined by how productively they engage capital, that is, how much they produce using a certain amount of capital. Nearly three decades have passed since these debates and the US and Japan continue to trade with each other and others quite happily.

The ghost of David Ricardo

Finally, consider this. Till the time we are not marooned on an island like Robinson Crusoe, we find it easier and more rewarding to buy our shirts from the tailor and our shoes from the cobbler. The point being that we don’t make everything we need or use. We trade our skill set and labour to the entrepreneur to produce something, and we get money in return to buy what we need.

A little after Adam Smith wrote ‘The Wealth of Nations’, Ricardo, another classical economist, explained why England and Portugal found it profitable to trade wine for cloth although both countries could make equally good cloth and wine. What nations sell and buy is determined by “comparative advantage”. Despite the world’s progress, the ghost of Ricardo’s “comparative advantage” continues to haunt us and every other nation.

The tragedy of economics

Every man is supposed to be rational and makes rational choices. From the Tulip Mania in the 1600s to the 2008 Subprime Mortgage Crisis, the long history of boom and bust has shown the hypothesis of a “rational man” to be incorrect. Man is emotional and easy to mislead. Often those who mislead do so for profit. For the other half, there is nothing but doom. For instance, the boycott of Chinese goods in India will lead to higher sales of either less effective or more expensive electronic items. During the protectionist regime in India (from the 60s to the 90s), when the tariff barriers were exceptionally high (recall the era of Ambassador cars), we paid for sub-standard products while the manufacturers laughed all the way to the bank.

“The ideas of economist and political philosophers, both when they are right and when they are wrong, are more powerful than is commonly supposed.”

The boycott of Chinese goods, or any anybody else’s products for that matter, will only hurt us.

As a nation, we will divert resources, capital and manpower to produce things that we could have bought at a cheaper price from China. As a nation, much like Soviet Russia, we will have lesser resources to develop and will eventually ignore our core area of competence and industry. In effect, it will be like cutting our nose to spite our face.

Boycott Chinese goods, by all means, but at your own peril.