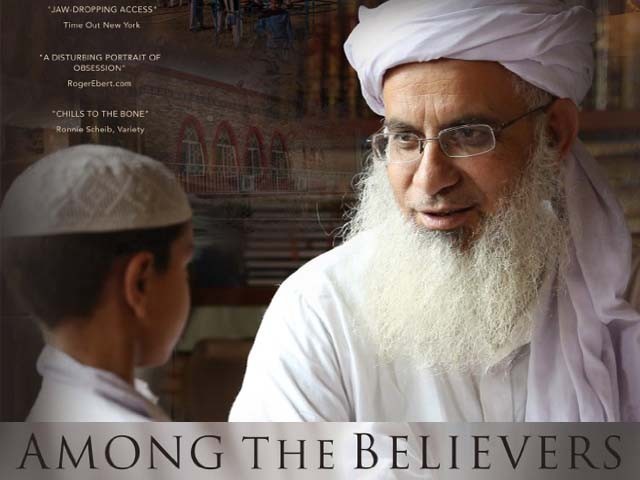 In the summer of 2014, I was living in New York when I met Hemal Trivedi. She told me she was making a film about Pakistan and wanted me to join her and the other director, Mohammed Ali Naqvi, to help them craft the narrative authentically.

I had seen dozens of films about Pakistan that were made by foreign filmmakers and honestly, most of them were horribly inaccurate. I felt it was a story worth telling which is why I decided to take the job.

The first step of editing any documentary is to familiarise oneself with the raw footage by reviewing all the tapes. I started with the footage of Maulana Abdul Aziz, whom we knew would be the main character in the film. By the time I became familiar with the footage of all major characters – Dr Pervez Hoobhoy (Aziz’s nemesis), Zarina (a 10-year-old student who dared to run away from Lal Masjid), Zarina’s family, Tariq (founder of the school Zarina joined after madrassa), Talha (student at Lal Masjid), Talha’s father and Aziz’s disciple Shoaib (dean at Lal Masjid) – I became completely isolated with the outside world. I was literally living in those tapes.

After spending over 12 hours with these characters every day, week after week, they had started seeping into my mind, so much so that even my dreams were about them.

Trivedi and I debated over every second and scene of the film. There were times when we spent weeks editing a small scene, trying to capture the nuances of the situation, labouring to show both sides of the picture and be as objective as possible.

Trivedi often used to say, as if reminding herself and not just us,

“I don’t want to make a polemic on Islam.”

But to me it was beyond being respectful to my religion. It was also important to create a balance between emotions and facts in a way that the former did not dilute the latter, and vice versa.

We felt that sticking with Aziz’s call for insurrection was an incomplete and inaccurate portrayal of his character. Showing Aziz’s life journey, his participation in the Afghan war as a young soldier, his father’s murder in front of his eyes, his frequent acts of charity, and the death of his only son, were as important in understanding the man as his decision to challenge the writ of the Pakistani state.

We were working out of Trivedi’s house then and often after exhausting ourselves, we would sit in her porch to take a break and play with her two-year-old son. Having him around reminded us that life was still beautiful, something we had started to forget.

While we were debating on how to show the soft side of Aziz in the safety of Trivedi’s house, the level of horror in the outside world was about to peak. The video of James Foley’s beheading at the hands of the Islamic State (IS) surfaced, and in just a few hours, it had become hard to avoid.

I finally clicked on a news story that said the video was edited to exclude the graphic images. Trivedi was sitting right beside me, and by now she also wanted to know the whole story. The video played and before we knew it, Foley’s head was being separated from his neck with a blade. We froze in our chairs, paralysed. When Trivedi finally punched the space bar, the images vanished from the screen but lingered in the room as the tinny echo of the laptop speakers died down.

It was impossible for us to continue editing that day.

I had never heard of Foley before but he was a journalist just like me, so in a way, I felt like he was my comrade.  I was outraged at his gruesome murder that had been presented to the whole world as a macabre horror show.

A month later, my professor of Islamic Studies at Karachi University, Shakeel Auj, was murdered in broad daylight. He had been accused of blasphemy by conservative quarters that saw his research as liberal, hence unacceptable. Suddenly, it was difficult for me to portray Aziz in any positive light because there was evidence that pointed towards extremists being involved in Professor Auj’s murder.

It felt like we were living under the dark cloud until we started editing scenes about Talha’s life in the madrassa where the students were forbidden from watching TV. They were diehard fans of Shahid Afridi and yearned to watch cricket. Their only source of entertainment was rain; for when it poured, the boys would run shirtless to the balconies and veranda, drenching themselves in the rain. It was such a beautiful scene, showing that these boys were just innocent children.

Later that day, I was discussing the same scene with Chris McCue, our associate producer and assistant editor. He said,

“Oh man, I wish I could take these kids out for lunch and get them a nice steak.”

I figured this was an American way of starting a new friendship and it stuck with me. I then realised the good this film could potentially do.

Sometimes, Naqvi and I would sit together to rethink the structure of a scene. I remember the two of us spending hours editing the scene about the siege of the Lal Masjid. We later shared our version with Trivedi who was editing it separately. All three of us converged our ideas and eventually reached its final structure.

Often, we would invite the other director, Naqvi, and a group of other people – fellow filmmakers, journalists, scholars, artists, intellectuals, film enthusiasts and Pakistanis living in New York – to come and watch our rough cuts (work in progress) and share their thoughts.

Everyone felt the endings we came up with were bleak and discouraging. There seemed no logical way to give the story a happy ending. But we kept mulling over our footage, retracing the journey of each character, especially Talha and Zarina, whose lives were caught in Aziz’s war. Eventually, we found a bitter sweet ending that (we later learned) resonated with the audience.

While the Federal Censor Board has banned Among the Believers, it has been shown in over 30 countries in five continents, won multiple awards and honours, including a nomination for an Emmy Award.

I remember a Pakistani filmmaker came to me after watching the documentary and said,

“If I were you, I would not have shown his soft side. I would have simply and very easily painted him as a monster.”

Another Pakistani viewer held the exact opposite opinion on how we should have edited the film. If everyone in the country could view the documentary, I can’t say they would interpret our portrayal of the characters and the film’s actual message. What I know is that so far every Pakistani who has been able to watch this documentary has appreciated our efforts to tell the story truthfully.

It is unfortunate that most Pakistanis cannot be a part of the conversation we had hoped to instigate here, where it would be most thought-provoking, perhaps where it could do the most good.

The author is a New York-based documentary filmmaker and a journalist. Her work focuses on human rights and politics. She is a 'Hubert H. Humphrey' and a 'Chevening SAJP' Fellow. She tweets as @alikhina (twitter.com/alikhina)

Why droves of Pakistani women are leaving their misogynistic country