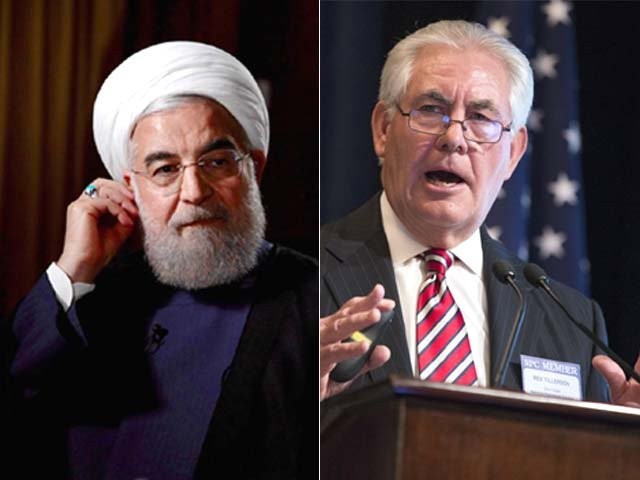 Tillerson went on to say that the US is examining the P5 +1 nuclear agreement with Iran very closely to find out how it can prove that Iran has violated the agreement.

It was reported in the Washington Post that the US Secretary of State, Mr Rex Tillerson, said the following words,

“I would like to assure the North Koreans that the USA is not their enemy; does not want any harm to come to them; they have nothing to be afraid of; the US does not seek regime change or the forced unification of the Korean peninsula, and the North Koreans need have no fear of any military invasion from the USA.”

He then went on to say that the North Korean ballistic missile program is a serious threat to the US. Therefore, it is exerting peaceful pressure on North Korea and would urge them to come to the negotiating table and start peaceful negotiations with the US.

He also confessed that,

“The US does not have any good options available for it to limit the North Korean ballistic missile program.”

These are very conciliatory words from the foreign minister of the most powerful country in the world directed to Kim Jong Un, a puny military dictator of an economically bankrupt country.

On the face of it, one would think that such a speech would allay any fears the North Korean have and that the US would come around to adopting a more reasonable stance. This is more so since there have been open hints that a peaceful settlement of such matters could be accompanied by significant economic incentives.

So, what does the little guy have to lose? On the face of it, it seems to be a perfect win-win situation.

However, during the same briefing, Tillerson went on to say that the US is examining the P5 +1 nuclear agreement with Iran very closely to find out how it can prove that Iran has violated the agreement. This could then become grounds for it to tear up the agreement.

He made this statement only days after the State Department had certified that the Iranians had held up their end of the bargain. However, Tillerson said that even though this may be so, they have not adhered to the spirit of the agreement in view of their involvement in several regional conflicts which expose their regional ambitions.

It appears that if a country enters into an agreement with the US on a particular issue, it should also follow their lead on all other peripheral issues – even if these matters may have nothing to do with the issue on which the original agreement had been signed on.

This seems like a pact with the devil. You succumb to one temptation and find yourself sliding down to hell.

The saving grace in the case of the nuclear deal is that the US is not the only power with whom the agreement has been signed. Britain, France, Germany, Russia and China are also a party to it. The other powers are content that the agreement managed to end a major area of uncertainty and instability in the world. They are sure that its signature and continued adherence are essential for Iran to not be able to develop nuclear weapons, for a short while at least. They view this as a very positive development for regional and world peace.

Numerous people in the world, including myself, applauded the signing of the Iran nuclear deal and complemented former President Barack Obama and Iranian President Hassan Rouhani for their foresight and statesmanship.

However, in view of the unfolding attitudes of the US and some Arab nations in the region, there is an alternative view taking hold, one that believes that it may have been a “historical mistake” on the part of Iran to sign this agreement. This view is based on the fact that many of the concessions made by Iran are irreversible.

As a result of this deal, Iran has dismantled most of its centrifuges and given up the stock pile of nuclear fissile material it had accumulated. Furthermore, it has agreed to open its nuclear facilities for international inspection in order to assure the world that it has no plans to back out of this agreement. In return for their actions, the United Nations lifted previous sanctions off of some embargoed funds.

In view of the inspections, it would be extremely difficult for Iran to reassemble the bank of centrifuges or build up a stockpile of fissile material. Even if Iran was to back out of the agreement, any attempt to reassemble its nuclear potential would most likely be met with military action from the US, Israel and some Arab states. They may be able to get the support of the Europeans also.

On the other hand, the concessions made by the other powers are not irreversible.

The “snap-back” provision in the deal allows the sanctions and other economic restrictions to be reinstated immediately in case of any violations by Iran.

As of now and despite arguments emerging from Washington, the rest of the world still believes that the Iran nuclear deal was a great measure for world peace and to limit the proliferation of nuclear weapons.

The Iranian regime continues to say that the agreement was accepted in order to demonstrate that it never had any intention of making nuclear weapons. It was not agreed upon because of some clever negotiations by the other powers.

If the US does decide to take unilateral action in breaking the agreement under some pretext, despite Iran’s adherence to the deal, Iran’s views on the deal being a big mistake would gain unanimity.

In any case, the US’ attitude towards the Iranian deal has dealt a fatal blow to their credibility. This should serve as a lesson for any country negotiating issues with the US.

It has also made potential negotiations with the North Koreans all the more difficult. It gives Kim the message that all this sweet talk from Tillerson may just be a subterfuge to get the North Koreans to the table, make some irreversible concessions and then leave them high and dry.

At a time when the whole world is watching the US with a close eye, the last thing they need is another nail in the coffin to worsen the already negative light the world views them in.