Ghairat: Exploring the orthodox beliefs and customs of honour killings and love marriages 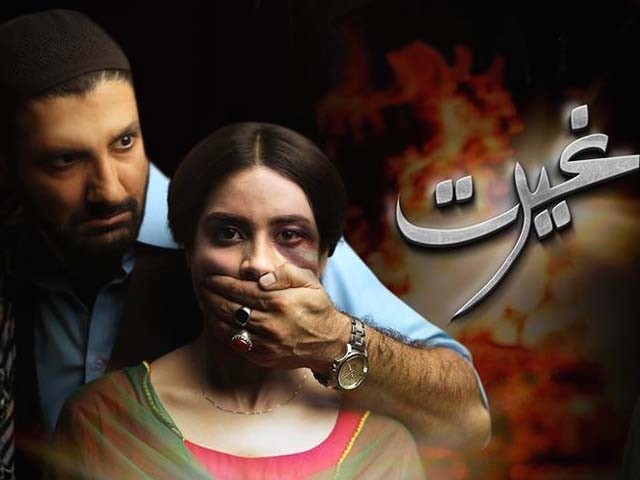 A new drama serial on ARY called Ghairat also explores the idea of honour killing and how several relationships and lives are ruined because of our orthodox beliefs and customs. PHOTO: SCREENSHOT

Just when we started to see a glimmer of hope due to recent political events, many of us were given a harsh reality check. We were once again made to see the reality of our patriarchal society.

We are once again talking about honour by stooping down to the level of discussing an unsuspecting female’s choice of clothing to become Pakistan’s top female squash player. We are once again associating izzat (honour) with the restrictive codes that women in Pakistan are expected to abide by.

I will leave this specific matter until further investigation and evidence from both parties. However, this particular incident has evoked memories of several horror stories of honour killings in Pakistan. The most recent and notorious one being Qandeel Baloch’s cold-blooded murder by her brother. Before you angrily start drafting a comment on this blog, I will save you some time by instead talking about women who are killed not because of their ambition, but because of their love.

A new drama serial called ‘Ghairat’ also explores the idea of honour killing and how several relationships and lives are ruined because of our orthodox beliefs and customs. This one drama seems like a breath of fresh air amidst TV content cluttered with spineless women, over-confident men, illogical issues, formula scripts and mindless cinematography.

I don’t watch a lot of TV and almost zero Pakistani channels. It was only recently that we decided to activate a few desi channels for my mother, who is visiting us during the summer break. And I am so glad that it gave me the opportunity to watch Ghairat. While the majority of our dramas are blatantly promoting oppression and objectification of women, colourism, class, sexism and a patriarchal mind-set, Ghairat, on the other hand, challenges some of these issues.

This drama serial explores the idea of living with a family member whom you know has killed another family member. To my surprise, someone has finally decided to talk not only about honour killings, but also the aftermath and the trauma such families go through.

The writer, Edison Idrees, has very aptly portrayed a lack of understanding of mental health issues in our country in the first episode. And I am expecting that in future episodes, Post Traumatic Stress Disorder (PTSD) will also be tackled.

But what I am sincerely hoping for is this drama to initiate the debate that we are so uncomfortable to have. Do women actually embody the entire family or community’s ghairat (honour)? Or as Shahrzad Mojab famously said,

“A woman’s body is considered to be the repository of family honour.”

I have great expectations from Ghairat, especially since I have read the creators of this serial want to nudge the audience into thinking ‘what if the roles are reversed?’ Could a woman kill a man in her family for honour? And can you imagine the number of Pakistani men whose life will be impacted if this started to happen?

I hope Idrees also covers how despite having amendments made to the law, numerous murderers still walk free after serving their jail sentence. It would also be interesting to see whether the serial tackles the Qisas (an eye for an eye) and Diyat (blood money) laws and how such laws have been abused by families to pardon murderers of their ‘beloved’ daughters.

Marrying for love is considered a crime in many parts of our country. At the very least, it is generally frowned upon. Families either do not accept it and if they do, they try to hide it from their relatives, fearing their judgment. Even in educated middle-class families, if someone marries for love, they are often assumed to be salacious and brash. I have personally seen many women being branded with different titles because they wanted to exercise their right of choosing a life partner.

I will save those stories for another day (or perhaps my book on being a woman in Pakistan) and will just quote a desi aunty whom I despise, and whose scathing words have been haunting me for several years. After having her daughter married to one of our relatives, she once jeered,

(In our family, no girl has ever married anyone of their choice.)

She said it like as if it was haram (forbidden) or something to be frowned upon. And we immediately knew her motive was to taunt her daughter’s sister-in-law, who had unashamedly married her best friend.

This incident very clearly depicts the patriarchal mind-set of our society, (something that Ghairat also explores) which discourages women to choose their life-partners. People might accept the idea of a man having love interests but if a woman does it, then it is definitely wrong and in some cases a punishable crime.

But what I fail to understand is how something as petty as a woman’s choice of clothing, or something as important as her choice of a life partner, can become so threatening to the patriarchs in our society that they would rather ruthlessly kill her?

Aren’t we all patriarchs then? Do we secretly condone honour killings?

How does one live with the guilt of intentionally taking a life? And that too of someone you once knew and loved?  How is it even possible to commit such a crime and then to expect your family members to forgive you? How do such people carry on with their lives as if nothing has happened? How can people boast about such vile actions to preserve the family’s so-called honour?

And most importantly, why do we think that murdering someone is an honourable act?

But then I guess some Pakistani families find it more convenient to live with a murderer than to have a daughter who wants her basic human rights.