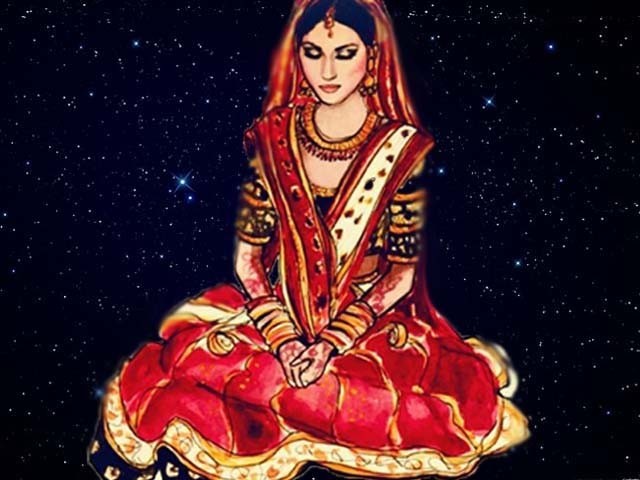 Her gown was stitched out of a deep red shade of velvet, and intricate golden patterns were embroidered at the bottom.

A thousand stars glittered in the charcoal black sky. They were magnificent, almost magical. Rani loved the stars, the sky and the night. Every night she would wondrously gaze up at the sky and try to count the stars as they endlessly spread into the deep velvet of the night. But tonight was even better, mostly, different. It wasn’t usual for girls to sit outside a train station in their bridal gowns and stare into the endlessly starry sky. But Rani’s life had always been different and she made a bride the same way too – a different bride, a ‘runaway’ bride.

Rani’s wedding day was drawing closer every day. Her house had already begun to flood with guests and many more were still expected. Rani spent most of her days in her room and except for the occasional appearances, she wasn’t seen around much. People were told that the wedding preparations exhausted the delicate bride-to-be. The lie was fairly convincing but far from the truth. In reality, it wasn’t exhaustion but despair. The only chance she stood for winning over her dream had been snatched away from her. She was drowning in despair.

The morning sky was dazzling. It was blue like the ocean during the day. There were clouds but not plenty. Rani was staring out at the sky, soaking in the calm of the morning, when she heard the knock on her door. A wave of relief washed over her at the sight of Zeenat, her childhood and only friend.

“I thought you weren’t going to come today. I was almost worried!” Rani let a little concern trickle into her voice.

“I came earlier, you were asleep,” said Zeenat, irritated.

“Coming to the matters of importance, are you sure about this?”

In reality, Rani wasn’t sure. She floundered, more than she ever had. But she knew better than to let Zeenat know. So she responded,

Rani’s eyes gleamed with satisfaction as she looked at herself in the mirror. She was unrecognisable. She looked beautiful. Her gown was stitched out of a deep red shade of velvet and intricate golden patterns were embroidered at the bottom. Her chestnut hair easily flowed down her back in gentle locks. She did not know if it was her fancy or the truth, but she really did look beautiful.

Rani ran and ran, but there was little sign of any cab. Finally, her legs gave way and she settled beside a large rock on the side of the road. A while later, a sharp light emerged in the distance and as it came closer, realisation struck. It was a wagon. Rani hurriedly jumped to her feet and raised her hand to hail the wagon. Upon Rani’s signal, the wagon stopped. And even more fortunately, it was headed to the train station – right where Rani was headed.

Finally, her excitement returned and she broke into a huge smile. The night was heavy outside, hollow and quiet but Rani didn’t care. She was only miles away from her dream. She’d take the train to Lahore and by morning, she’ll have reached. The thought filled her with immense happiness – the kind of happiness she hadn’t felt in days. A happiness she hadn’t felt ever since her wedding had been set.

Sitting in the silence of the wagon, Rani reflected on how daring she had been. She was going to the wedding hall with her mother while the others had already left. On their way, Rani saw a pizza shop and asked her mother if they could eat pizza together, one last time. Her voice wracked with sadness and pain as she made her guileless request. Suddenly, tears formed in the corner of her mother’s eyes. It was only natural, a motherly thing. Most mothers do tear up when they wed their daughters and Rani had given up on her dream to marry into a family of her parents’ choice. Well, not really but they knew little about her plans.

Rani’s mother left her in the car when she went to get pizza. It was only in that small amount of time that Rani ran away. She knew her mom would instantly be thrown into a blind panic and it will take her quite some time to react before she’d even consider that Rani ran away. In that moment, cold anxiety was growing in her stomach. She was nervous, more than she had ever been. But now she felt proud and happy, elated even.

She quietly sat outside the train station, gazing up at the sky. Tonight, it was more beautiful than all other nights. Tonight, the stars were shining brighter. Their glory reverberated all across the night sky. She felt oddly satisfied looking at them, they made her happier. She did not know what the outcome would be. She did not know if she’d even be able to bag the role in the film, but she was hopeful. The stars eased out her stress. There was nothing like a sweet starry night to blow away your troubles. The rest of the time, she didn’t think about the troubles, but counted the time till the train’s arrival.