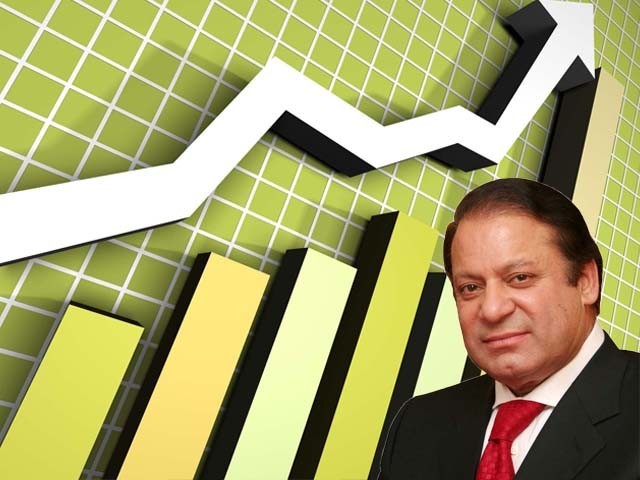 Ranking 116th in the world in corruption index is no matter of pride despite a much touted 5.3% economic growth.

In one of his first public appearances, former Prime Minister Nawaz Sharif was reported to have said the following:

So, is a rising stock market really a barometer of a strong democracy or just a number game for a selected few?

We surely cannot say at the moment.

To all the Pakistan Tehreek-e-Insaaf (PTI) sloganeers, Nawaz is gone, but is prosperity, not tabdeeli (change), around the corner?

Pakistan Muslim League-Nawaz (PML-N) was primarily the only major political party that was known for their pro-growth temperament. Despite never being able to complete their full term, businesses cheered on the so-called economic focus of the party.

While Nawaz may be gone, the government is here to stay.

Pakistan, just like any other country, has witnessed some rough times – Liaquat Ali Khan’s and Benazir Bhutto’s assassination, Zulfikar Ali Bhutto’s controversial hanging, and the 1971 war. But we’ve bounced back stronger each time; such is the resilience and optimism of Pakistanis.

With all the drone attacks, the Salala attack, the discovery of Osama Bin Laden (OBL), and conspiracy theories regarding Muttahida Qaumi Movement – Pakistan’s (MQM-P) leader, a prime minister being disqualified on charges of corruption is a mildly digestible story  for us Pakistanis.

But one of the most important questions lingering on everyone’s heads is if stock market investors and businesses can survive Nawaz’s disqualification? To them I say, yes they can, and here is why.

For an ascending stock market, a few things are crucial.

I have previously argued that falling international oil prices, with a bit of fiscal forethought, keep interest rates in the single digits category. So yes, investors would opt for a higher risk-appetite in the medium run. Oil at $100 is a bigger risk than the PM’s disqualification.

Oil at $100 per barrel adds imports worth $7 billion every year, which leads to the current account deficit increasing from 4% to 6.5%. This can also lead to an increase in the cost of electricity (regasified liquefied natural gas prices are linked to oil prices as well), the fiscal deficit will also increase from 5% to 7% since the State Bank of Pakistan (SBP) would have to increase the interest the government pays on issued debts. The current interest rate is 5.75% which could probably go up to 9%.

Of course government policies set a tone for industrialists, entrepreneurs and other stock market investors. Key decision-makers of listed and unlisted companies foresee rising profitability and undertake massive capital expenditures in light of assurances made on behalf of the ministries. But a constantly changing political landscape doesn’t help here.

Financial pundits who had expected PML-N to get re-elected in the 2018 elections were quite taken aback by Nawaz’s disqualification. But while Nawaz’s popularity might have been marginally dented, there is a silver lining for him. The Supreme Court (SC) disqualified him over a trivial omission of concealment of a company set up for travel purposes. That said, I believe that PML-N cannot be ruled out in the next elections for sure.

In essence, the additional 12% (from $35 to $290) to the Gross Domestic Product (GDP) would not have been politically suicidal if the government would have raised the same amount through local borrowing in the form of permanent interest bearing shares (PIB) and treasury bills (TBills).

Usually the government can sell fixed income instruments to locals in PKR or borrow from global lenders during times of a deficit. The government selling PIB and TBills worth Rs 1 trillion will make more of an interesting headline as compared to borrowing $10 billion.

Surely, the opposition would have had no ammo to attack with as our nation is clearly more responsive to dollars being added to government debt rather than the rupee.

Moreover, adding dollar-denominated foreign loans shocked exporters who were then rewarded with hefty export rebates, which they failed to utilise. This is a costly bet, which if unserviced, can put significant pressure on PKR versus USD.

Although the lesser known facts are that the rupee is free floating against the Euro, the British Pound and the Japanese Yen, but it is pegged against the USD, as per the master plan of Dar.

More worrying for businesses is how financial planning would be affected in the absence of PML-N economic wizard, Dar. While he battles his National Accountability Bureau (NAB) cases, will his predecessor follow a similar policy of external dollar-denominated loans and keep the PKR tagged to the USD? Or would he opt for a less media-catchy local PKR debt and let the rupee depreciate?

If this were to happen, it would add uncertainty in the financial sector, may delay financial planning, make the repayment of loans riskier, and stymie profitability growth.

Hampers the growth for a while, doesn’t it?

Futhermore, for those who believe PML-N is the sole driving force behind China-Pakistan Economic Corridor (CPEC), China was quick to push aside all claims and say that it,

“Hopes that all parties and sections in Pakistan can prioritise state and national interests.”

Thus, fortunately, CPEC will not be affected by Nawaz’s disqualification.

For now, everything seems to be going smoothly. Therefore, economic stability and progress will boil down to Dar and Nawaz’s replacements and their policies.

All said and done, it does not matter if the only pretext of Nawaz’s disqualification was his concealment of salary worth a few hundred thousand dollars. Crime, even if it is trivial in nature, is a much bigger crime if committed by the supreme most public office holder.

By disqualifying Nawaz, democracy has actually won and a great precedent has been set for improved future governance.