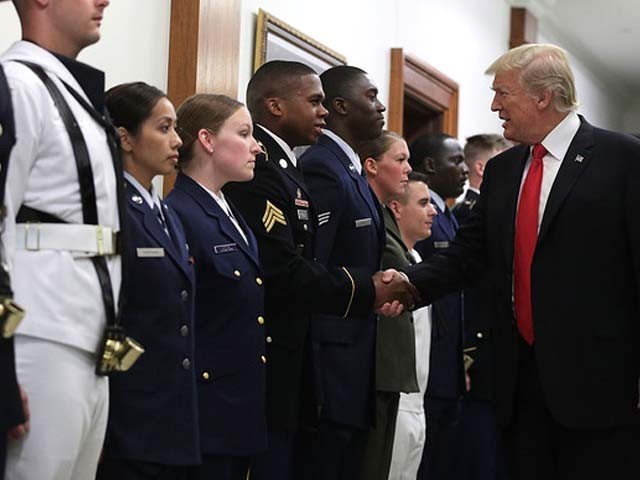 President Donald Trump reversed an Obama-era rule that would have allowed transgender people to serve openly in the military. PHOTO: GETTY

Christopher T Beck was a US Navy SEAL for 20 years. Beck was part of the elite anti-terrorism unit known popularly as SEAL Team Six and was decorated with the Bronze Star (distinguished performance) and Purple Heart (for wounds suffered in combat).

After retiring in 2011, Beck began the transition that would allow his emotional maturation and identity consolidation he had long yearned for.

Let me correct myself, that she had long yearned for.

Today, Christopher is Kristin Beck, a trans woman that had to wait for her military career to be over before she could be who she wanted to be. She is a best-selling author, inspiration to transgender individuals, and currently the most prominent critic of Donald Trump’s proposed blanket ban on transgender individuals serving in the military.

As has become his bizarre habit, Trump announced this measure through a tweet.

….Transgender individuals to serve in any capacity in the U.S. Military. Our military must be focused on decisive and overwhelming…..

….victory and cannot be burdened with the tremendous medical costs and disruption that transgender in the military would entail. Thank you

There is yet to be an executive order regarding this ban and the Pentagon has publicly stated that they have not received such a directive from the executive office as yet. However, the media is thus far reporting on the premise that such a ban is imminent.

There are obviously numerous people in the military, as well as amongst Trump voters, that are in favour of such a ban. Personal opinions and prejudices aside, a blanket ban on transgender individuals in the military has no ethical or logical justification.

An individual who demonstrates the physical and emotional endurance to become a soldier has the right to be a soldier regardless of their gender status. Anything else would be a departure from meritocracy and plain prejudice.

Coming to the supposed “tremendous” medical costs, this is the flimsiest of excuses easily disproven by the available research on the subject. A study commissioned by the Department of Defence and conducted by the research organisation RAND in 2016 estimated that there were between 1,320 and 6,630 transgender individuals in active military service.

Only a certain percentage of transgender individuals seek gender reassignment services. RAND calculated the approximate additional medical costs to the military to be between $2.4 and $8.4 million.

The military spends $84 million on erectile dysfunction every year. That is 10 times more than the upper limit of what accommodating transgender individuals will cost.

Another paper in The New England Journal of Medicine calculated the additional medical expenditure on transgender military personnel to be between $4.2 to $5.6 million dollars. This would constitute a military healthcare spending hike of 0.04% to 0.13% according to the study.

Therefore, the conclusion is that there is not a grain of truth in the president’s tweet.

As for the “disruption”, to date the military or the media have not reported any significant intrusion or disruption in military matters by the presence of transgender individuals.

Another lie from the liar in chief.

The fact of the matter is that this ban is a continuation of the wave of amoral ultra-nationalism that Trump rode on to the White House. Do not for a second assume that it is religious sentiment or true patriotism that is driving this hideous chariot. This is an enterprise that is built entirely to serve the cabal of elite merchants, politicians and military chiefs that passes for the global capitalist economic order.

Whether it is LGBTQ individuals, Mexicans or Muslims, those driving these prejudices with their enormous propaganda networks have a common ultimate end. That end is to create an intolerant society that empathises only with majority opinions and dehumanises others.

Those who desire endless war require endless enemies. Too much empathy and individual rights muddy the waters of fascism. This is why the Trump administration is systematically institutionalising bigotry. It has done so through rhetoric, legislation and executive orders.

Trump is an amoral and opinionless man who does whatever his fragile pride and the circle he has created around him asks him to do. And his present circle is the very embodiment of the military-industrial complex.

This ban against transgender individuals serving in the military must be resisted. It is not only the morally correct thing to do, but for the reasons I have mentioned above, it is also a necessary element of self-preservation for all minorities and oppressed groups.