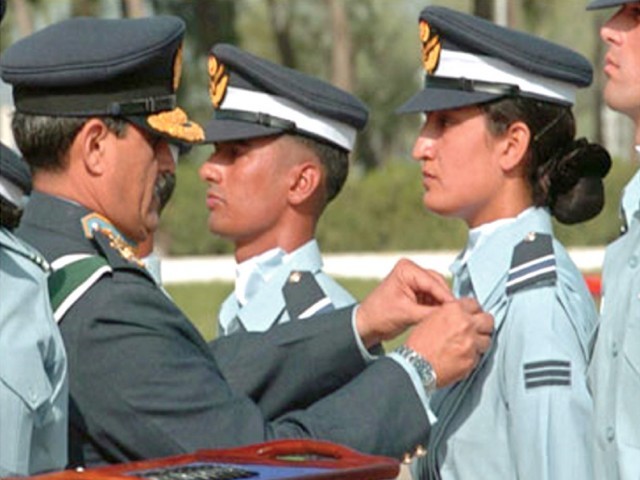 Flying planes for Pakistan has been my best friend's dream

My best friend wants to be an air force pilot. She (yes, it’s a she) has wanted to be one since she first watched Top Gun. She can tell you the model number of any jet and its year of make by just looking at a picture.

While everyone else our age stalks the Lahore University of Management Sciences (Lums) website, she has the Pakistan Air Force website as her ‘most visited’. Risalpur is her future home.

During the past six months, I have been forced to memorise the lyrics of “Highway to the Danger Zone” and google its 1980s Pakistani counterpart too: Tum Hee Say Aai Mujahido. Anyone?

This is an excerpt of the coversations we have:

She brings her hand to her eyebrow, palm facing downwards.

She brings her hand to the top of her head, palm facing outwards.

“But dude, we’re Pakistani. Shouldn’t we salute like this?”

She cups her palm and brings it to her nose.

For her birthday, our group of friends seriously considered buying her one of those air force bomber jackets — till we realised she already had one. We settled for an F-16 shaped card.

This is all very unusual for us, but not why you would think it is. Girls in the air force? Been there, done that. No, the unusual thing is that this particular friend of ours actually has a dream. While you’re being bombarded with university applications and are having second doubts about your subject choices, someone out there knows exactly what she wants to do in life and, that too, at the age of 17.

Her dream became our dream. And so we started researching for people who were ever part of the PAF, or the armed forces in general.

First candidate: the tenth grade biology teacher, who had considered a life in the army until she dropped out.

Second candidate: an uncle who did a U-turn after a few months and became a brain surgeon.

“Are you telling me that everyone who failed Risalpur ends up being a bloody doctor?!” our friend screamed on the phone. Her subject choices just happen to be all sciences.

We talked to an aeronautical engineer, who wasn’t exactly as wide-eyed as us:

“The government doesn’t spend Rs10 million on every pilot officer so that they can get married and sit at home making chai.”

“Yeah, try telling that to your mom.”

And it’s a fact that the much-lauded first batch of female pilots is only in charge of F-7s, and are unlikely to be seen in combat.

Still, we haven’t given up. My friend still has the JF-17 Thunder as her screensaver and she still has a dream, which is more than what can be said for me and my equally confused classmates. Some of us will go through college ‘undecided’, while others knew they wanted to a surgeon when they were five-years-old, fresh out of diapers and picking on their own scabs.

Dream building is so much easier as children.

When I was seven years old, I announced to my parents that I wanted to be an astronaut. I named my teddy Laika, after the first dog in space, and entered every room proclaiming, “This is one small step for Meiryum…”. After a month of informing unsuspecting strangers about the height of the rocket Saturn V, the friendly optometrist told me I was getting glasses — and, well, that was the end of that. I was heartbroken. Who knew you needed 20/20 vision to fly space shuttles?

So if someone has a dream, and if she has a dream at an age when few do, then I swear by all the F16s and the Ghauris and the Shaheens, I will make sure she gets to Risalpur, and no brutally honest aeronautical engineer is going to say otherwise. If she doesn’t fill out the forms next year, we’re threatening to ship her to the PAF Finishing school – ‘A Grooming Academy for Women’ (yes it actually exists).

“Maybe you can do the finishing school’s commencement speech as Air Chief Marshal”’ I say.

At the rate she’s going, she probably will.