Rasm over rights: Why is the nikkahnama woven with inequality towards women? 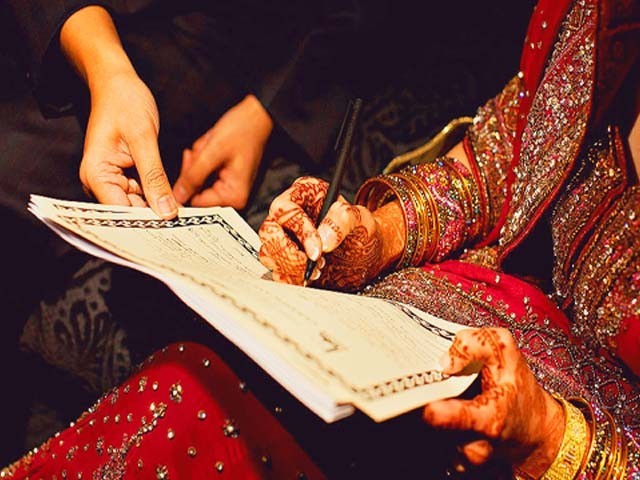 Shaadi (marriage) is perhaps the most cherished tradition in Pakistani culture, a gathering of levity and simultaneous importance and an event which many deem to be the most significant in their lives.

For women in Pakistan, the latter is often the case since marriage bounds them to a contract that is deliberately created to disadvantage them.

The institution of marriage has been weaponised by the male-dominated religious lobby in Pakistan to systematically disenfranchise women into a life that is decided by their significant other. The most integral part of this system is the nikkahnama (marriage certificate). For many married couples, the nikkahnama is at best an afterthought in the marriage festivities, a document that must be hastily signed before dinner is served. According to an article from 2014,

“In Peshawar, more than 50% of women can’t read their nikkahnama; 74% women aren’t consulted before the filling of marriage registration forms and 40% married women don’t even know who had filled them, says a recent study done by the Provincial Commission on the Status of Women (PCSW). According to Suhail Farooq, survey conductor for the PCSW sponsored by the Aurat Foundation and USAID said, usually family elders filled marriage forms. We didn’t come across a single woman during the survey who filled her marriage certificate form for herself.”

This complete ignorance of the nikkahnama, wilful or coerced, harms women the most. The writer of this article was able to obtain a certified English translation of the nikkahnama from the website of the Pakistan Embassy in the United States. The contract reveals the intricacy with which discrimination has been woven into marriage.

The second question about the bride, the first being her name, reads as following:

“Whether the bride is virgin, married or divorced.”

It is interesting that no such question is asked of the groom. Do the groom’s past fidelities hold less relevance in a marriage of equals?

It is equally interesting to note that an unmarried woman is automatically assumed to be a virgin. Even if adultery is a crime in Pakistan (as morally problematic as that is) where is the due process for those women who have been tried, convicted, served their punishments and now want to marry? Even if some obscure legislation for this exists, it should be specified in the contract. Nothing in Islam bars adulterers from marriage.

These queries are followed by questions on haq mehr, an obligatory payment to be made by the groom or his family to the bride on the occasion of marriage. A Sustainable Development Policy Institute study from 2016, titled ‘Socio-economic and Cultural Factors of Violence against Women in Pakistan’ states,

“At the time of nikkah (signing of marriage contract), the sections where a woman can demand haq mehr (legitimate amount of money to be gifted to the bride at the time of her wedding) are crossed out beforehand and it is considered socially unacceptable to criticise it.”

This is even more problematic considering the intricacies of the haq mehr rule. Haq mehr is divided into mawajjal (deferred/promised) and mo’ajjal (at the time of the nikkah ceremony). Not specifying these amounts can lead to serious issues in legally pursuing the right of haq mehr later on in the marriage if the amount is not received at the time of the nikkah. Even if elders in the family have privately discussed amongst themselves a suitable sum for haq mehr, this must be decided by the person who is most likely to be affected by it – the bride herself.

Of course, many argue that there is at least one fail-safe if the marriage goes south – divorce. Unsurprisingly, the nikkahnama is at its most discriminatory when it comes to the sections on divorce. Here is how the question is presented to women and men respectively:

“Has the groom given the right of divorce to the bride. If given, then on what conditions?”

“Is there any restriction on the right of divorce on the groom?”

The different ways the questions have been presented are clearly indicative of inequality. The groom seems to be afforded the right to divorce by virtue of being a man, while the bride must gain her right of divorce from someone else, a blatant violation of Article 8 of the Constitution of Pakistan, which guarantees the protection of life, liberty, body, reputation and property of an individual.

Of course, this is if the bride even finds the aforementioned question on the document.

In a 2016 article from the Express Tribune, according to Mariam Riaz, who is part of a group of lawyers and students decoding the nikkahnama), various sections of the nikkahnama are removed before the couple gets to see the document. As per Riaz,

Women who have not been afforded the right to divorce must pursue khula, which prevents them from receiving a fair share of the family’s wealth, virtually making it impossible to escape an unhealthy marriage.

These are just a few issues associated with the marriage contract. There are far more issues expounding upon the problems related to fees, witnesses and most importantly, child marriage. However, steps can still be taken to counter the problems identified.

The writer of the aforementioned article suggests simple recommendations for these problems. First, to make it legally obligatory for both the bride and groom to give express consent to each term and condition of the contract – this can be done before the nikkah event itself, to allow for proper time to be given to the nikkahnama. Although elders and other individuals may be present, they must at best operate in an advisory capacity. If any duress on part of the family is noticed by the marriage registrar responsible for the arbitration of the contract, they must be reported to the local union council immediately as forced marriages (swara) are void under Islamic law.

In addition, questions of divorce must be removed altogether and amendments should be made to Articles 7 and 8 of the Family Law Ordinance in such a way that it is assumed that women have an inalienable right to pursue divorce in all circumstances. The marriage registrar must also stress on particularly significant clauses such as those involving haq mehr and divorce, and must be adequately qualified to explain the legal intricacies of such questions.

The Punjab government’s internationally acclaimed Strategic Reforms Unit has been applauded on the passage of the first Punjab Protection of Women Against Violence Act and the establishment of the Violence Against Women Centre. This shows that the government possesses both the infrastructure and will to create more space for women in society. Many more reforms may be undertaken, but that can only happen once society recognises that the nikkahnama is the single most important element in marriage.

Festivities can only last for so long, but a mutually agreed upon contract with equal rights is most likely to serve as a solid foundation for marriage.