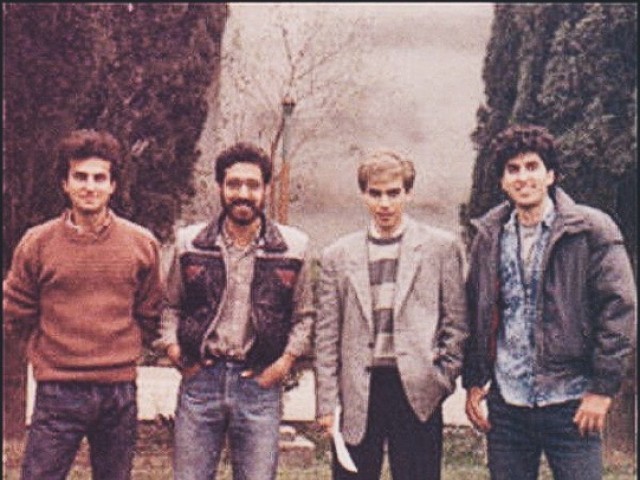 After some back and forth between Mansoor and the board, the video was finally allowed to air. It became an instant hit. PHOTO: PINTEREST

In June 1987, an obscure Pakistani pop band, the Vital Signs were contacted by the then 36-year-old TV producer, Shoaib Mansoor. Mansoor had already made a name for himself for conceiving and producing a social satire ‘skit show’ for the state-owned Pakistan Television (PTV), Fifty Fifty. He had launched it in 1978 and it was an immediate hit with the viewers, running for eight seasons till Mansoor shut it down in 1984.

Mansoor was teaching at the PTV Academy when one of his students, Rana Kanwal, drew his attention towards a pop band that had been playing at ‘college functions’ (mainly in the Rawalpindi-Islamabad area). They had gathered a pretty strong ‘underground following’. Most of the band’s fans were female college and high school students.

The band was formed by synth-player and occasional guitarist, Rohail Hyatt, and his friend, bassist Shahzad Hassan. They were soon joined by guitarist Nusrat Hussain. All three had played in the now forgotten bands, The Progressions and Crude X in the early 80s.

They were all in their teens when they came across another adolescent who they saw singing George Michael’s ‘Careless Whispers’ in a concert at a girls’ college in Islamabad. His name was Junaid Jamshed (JJ) who was also a student at an engineering college.

By 1986, the four had become a band. Curiously, even though they regularly performed at colleges, they still did not have a name. However, in 1999, when I was working at an English daily in Karachi, a reader mailed me a photocopy of a January 1987 newsletter published by the students of Lahore’s University of Engineering (UET). In it was a review of a concert at the university by a band called ‘JJ’s Lot.’ In his note to me, the sender wrote that this was the name given to the band by the editors of the newsletter.

The review mentioned JJ, Rohail and Shahzad. It also mentions a drummer but he is not named. Nusrat is not mentioned at all. The review went on to say that JJ was also part of another band called Nuts & Bolts. The report explains the band singing various ‘western pop and rock hits’ and covers of songs from Indian films, and those by the then leading Pakistani pop/disco duo, Nazia and Zoheb. In the end, the review laments that the ‘concert ended in commotion’. It doesn’t explain how or why.

The PTV Academy student, Kanwal, approached the band for a project which saw the band recording their first original composition, ‘Chehra’. It was a class assignment given to Kanwal by Mansoor. ‘Chehra’ was actually a pop rendition of a poem penned by the famous Urdu poetess, Parveen Shakir. Mansoor wasn’t impressed, but the song would still manage to end up on the Vital Signs’ debut album.

One of the earliest versions of the Vital Signs’ first original composition, ‘Chehra’.

In June 1987, Mansoor began thinking about producing a ‘youthful national song’ for Pakistan’s 40th birth anniversary (August 14, 1987). He revisited the amateur video that Kanwal had made for ‘Cherah’ and eventually contacted the Vital Signs.

Mansoor already had the lyrics of the song that he wanted the band to record. The words were by Nisar Nasik but had been rearranged a bit and added to by Mansoor. Rohail snickered when he saw the lyrics. The band just couldn’t fathom exactly what the title, ‘Dil Dil Pakistan’ actually meant. Its immediate English translation is, ‘heart heart Pakistan’.

Here also lies the possible origin story of the band’s name: Vital Signs. Over the years, three accounts have emerged about how the name came about, and all three have, in one way or the other, been corroborated by the band members.

The first version sees the band, while recording ‘Dil Dil Pakistan’, being asked by Mansoor to come up with a name for the group. It then sees Rohail and Shahzad thinking about the name while listening to the song, ‘Vital Signs’, by the Canadian prog-rock band, Rush. Then someone suggests “why not the Vital Signs?” and they all agree.

The second version sees the name being purposed by Shahzad’s sister who was a doctor. The third version sees the band members still trying to comprehend the meaning of ‘heart heart Pakistan’ until jokingly suggesting “let’s call ourselves the Vital Signs”!

The prospect of being helmed by a famous TV producer, who also wanted to shoot a video of the song, convinced the band to record it. Nusrat, who till then was considered to be the most accomplished musician in the group, was handed the responsibility of composing the song.

He came up with a composition but Mansoor hated it. Nusrat went back and came up with another tune, and the rest of the band loved it. JJ did his bit by humming a melody around Nusrat’s creation and the composition finally got the green light from Mansoor.

The echoing start of the song (Da da da dil, dil dil …) was an afterthought, supplemented by Rohail who added reverb to JJ’s opening vocals.

With the song done, Mansoor then filmed the band lip-synching it on lush hills, around trees and while driving around in an open-top Suzuki jeep. They appear in the video in denim and can also be seen riding their motorbikes, their most prized possessions at the time.

With August 14th approaching, Mansoor quickly sent the video to the members of PTV’s censor board. They returned it as quickly, saying that the video cannot be allowed to air on PTV. In their note to Mansoor, they complained that “pop and patriotism do not mix”, and that the “boys were behaving like hooligans on bikes”.

One must remember that this was 1987. Pakistan had been quivering under a reactionary dictatorship since July 1977. Mansoor was livid. He tried to convince the board, rather remind them, that this was how young people were behaving (outside of PTV) and that if they (the board members) wanted young Pakistanis to connect with patriotism, they will have to talk to the youth in their language.

After some back and forth between Mansoor and the board, the video was finally allowed to air. And it became an instant hit.

The dictatorship folded in 1988 and democracy returned. The Vital Signs’ success had already brought forth numerous pop acts who had been performing ‘underground’ across the mid and late 80s. The Vital Signs would continue to remain being the land’s leading pop act, recording four top-selling albums.

On its way to the top, the band would refine and polish their musical prowess, hire and lose at least five guitarists, and often bicker among themselves before finally calling it a day in 1998.

All the while, ‘Dil Dil Pakistan’ kept growing, even among the next two generations of young Pakistanis, until it officially became Pakistan’s unofficial national anthem.

Shoaib Mansoor: Mansoor remained associated with the band throughout its existence, as mentor and lyricist. He also continued his career as a TV producer and then went on to direct two Urdu films.

Junaid Jamshed: JJ was the most active and popular member of the band. After the band folded in 1998, he recorded two solo albums before joining an Islamic evangelic outfit and quitting music in 2002. He became a highly successful businessman and preacher. Tragically, he died in a plane crash in 2016.

Rohail Hyatt: Rohail was considered to be the leader of the band, despite the fact that he was the most private and introverted member. He still laments that the leadership of the band had been ‘thrust upon him’. He would also excel as a producer and helm all Vital Signs’ albums. After the demise of the band, he formed his own production house, Pyramid. He tasted his second major burst of fame as the producer and mastermind behind the immensely successful, Coke Studio.

The writer is a cultural critic and columnist. He has also authored two best-selling books on the social history of Pakistan, End of the Past and The Pakistan Anti-Hero. He tweets @NadeemfParacha (twitter.com/NadeemfParacha)

16 years after 9/11: Its tragic memory, surreal aftermath and the insecure world it left behind