You killed her… the strong, independent woman and her voice along with it 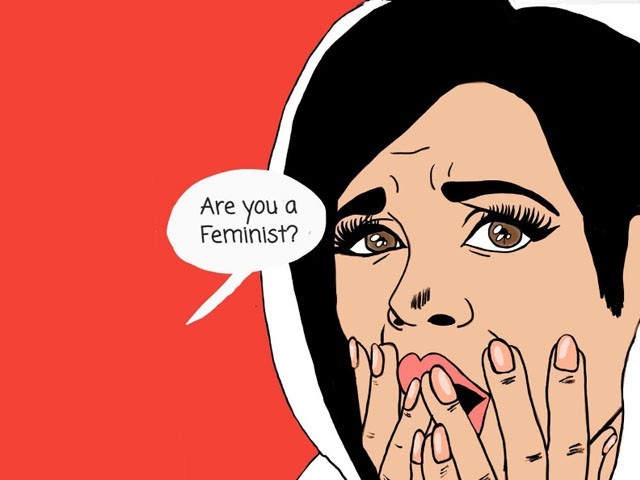 You are allowed to take up space because you matter and anyone that says otherwise is lying. PHOTO: THEPAKISTANIMARTHASTEWART

I recently came across an article that brought up some thoughts about being a woman in Pakistan. The following is the said article: 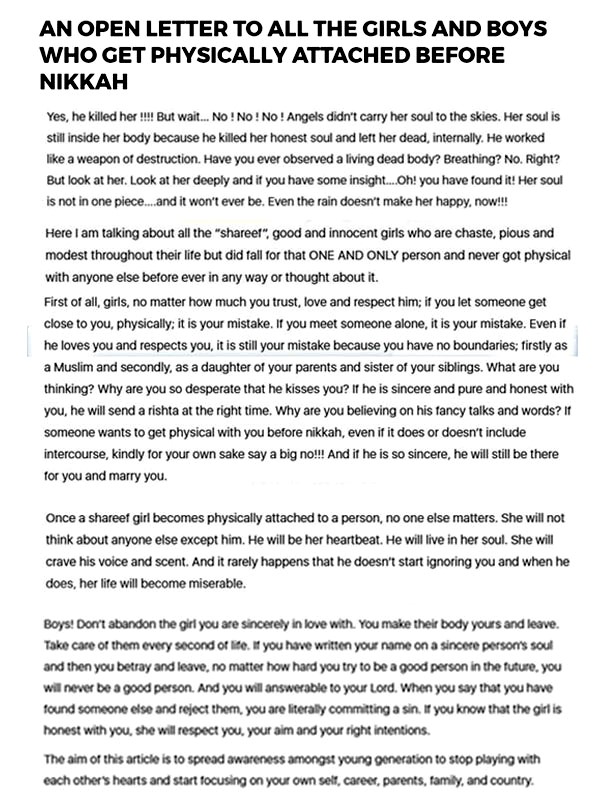 There are girls out there who think they are the moral police of our society. They are the ones that pick and choose when they want to be feminists. The ones that believe it is their right to tell others what to think or feel.

Why do you think it is your duty to define what’s right or wrong? If you’re telling someone not to get “physically attached” before their nikkah, you’re barking up the wrong tree. A tree that isn’t yours in the first place. It isn’t anyone’s place and what irritates me to no end is that we live in a society where everyone believes they have to force their views upon everyone around them just to remind themselves that they exist. But no. We live during a time where free thought should essentially rise above everything else.

Let’s say someone gives you advice, and you ignore it – that’s fine, but what’s wrong with society is that people believe that it is their right to impose their thoughts upon you, and your duty to follow said advice. What happened to individuality? What happened to taking responsibility for our own actions? Did we just throw all that out the window?

If you’ve read the article I’m talking about, you’ll understand where I’m coming from. The notion that getting physical with someone is directly synonymous with losing your dignity is not true. This idea is a problem that persists in almost every division of Pakistani society – girls giving unsolicited advice and the matriarchy extending its paws over any girl who dares to think outside the box.

To the writer of this piece, you should know, you killed her. That’s right. The strong, independent woman and her voice along with it. You killed the girl that makes her own choices.

The girl that is unafraid of society and unafraid to stand on her own two feet. You killed her and patriarchy rejoiced. But listen, they didn’t rejoice for you, they didn’t clap for you, because at the end of the day, you are still a girl and they are still the ones that believe you cannot do anything more than publish an untimely piece on an online forum. That’s right, I said it.

I’m not saying I’m any different. I too sit behind the screen of my computer writing another article hoping that someone will read it and tell me that maybe things will get better. Tell me that my voice matters. Tell me that maybe, just maybe, my ideas and thoughts affected them, but that’s not how it works. At least, not in Pakistan, and definitely not in Karachi. We sit here, the defenders of the written word, yet no one really reads closely enough to listen to what we are inherently trying to say.

It makes me sad that we, the educated women, find the need to write about things that are so personal in such an ignorant manner. Yes, the physical body is extremely important and I believe that we should get the conversation going. Us, girls, have stood for too long lingering in the shadows of our brothers, fathers and male friends. Some of us are too ignorant to even know enough about our bodies to preach to those around us – I don’t know why we live in a society where speaking about something so natural is feared. Why aren’t our girls given a sex education? Is society that afraid to let us learn? To let us thrive?

Girls, your bodies are not something you should be ashamed of. You are allowed to take up space because you matter and anyone who says otherwise is lying.

The thing about giving people relationship advice is that it almost never works because at the end of the day, we are all individuals and we should rejoice in that fact. So you messaged that guy first? Good for you. He didn’t reply? So what? Get over it. Move on. That’s life. You will encounter jerks. Ignore anyone who says you should be chained down to a place or a person because that’s a lie.

The said article talks about how getting physically attached to someone before marriage is the worst thing a girl can do to herself – so bad that it leads to suicide. Yes, suicide is a prevalent issue in our society but not every girl who “gives herself up” before marriage wants to commit suicide. In a country like Pakistan, where suicide is already so taboo, we need to understand its implications before just throwing the word around. Suicide is not a joke. Anyone who suffers from depression or other mental illnesses that come with suicidal tendencies knows that we need to open up the conversation about suicide and it is not something that can be, or should be, spoken about lightly.

To all the girls out there who are afraid of commitment or afraid of not committing because of some twisted idea of conformity – chill out. Take a step back. Analyse your own choices. Yes, I understand that there are so many of you out there that come from conservative backgrounds and your parents are pressuring you, your grandparents are begging you and those aunties at shaadis are basically undressing you with their eyes – but you have to be stronger than that because trust me, no one is going to fight for you.

When the writer says, “he killed her”, even metaphorically it is degrading because feminism talks about physical, economic, social and emotional equality. Feminism isn’t fickle, it is not about accepting one thing that works in your favour and denying the rest. Thus, you cannot claim to be on a moral pedestal while at the same time demeaning women that have different opinions than you.

The real problem is there are numerous girls who pretend to be innocent because of their parents and society. If you are pretending, at least don’t judge those around you. Give them a break, because if you are pretending to believe in what society extends to our lost girls – the notion that being pure is essentially a woman’s sole duty in life –there are girls out there who will follow you. And following someone on false pretences just creates a vicious cycle that becomes almost impossible to break out of.

Why is it that women in Pakistan always have to put other women down? So you’re out in public, you analyse what another woman is wearing. You follow her with your eyes. You question her. But you never say that she looks good; the typical reaction to another woman of power is essentially almost always negative.

There’s this thing about a group of girls, and how they can be the most empowering yet degrading of their own kind. They can build you up with all their might but when it suits them, they will tear you down fearlessly. They will be the saviours of their kind if you step out of line. But where does the line exist? This imaginary, we-have-to-be-the-same-or-else line that so many women in Pakistan seem to linger near but never over. And when they do step over it, religion always comes into par. She’s moved away from religion, they say. She’s lost her way, they say. Religion, just like my choices and actions, is personal and has nothing to do with you. I will essentially have to answer for myself – you have nothing to do with my day of judgement, so why so much interest and involvement in my life?

When it comes to religion, at the end of the day, no matter what your views, no one should interfere or impose anything upon you. So when we have girls acting as the so-called moral police of the shareef (innocent) faction of society, we should know to ignore them because them stating their views upon us isn’t going to make us change our own.

The point is, you killed her and you don’t even care.

You killed her and you walked away.

You are nothing but a murderer – a murderer of freedom and individuality.