Kashmir: Don’t ever call this valley a ‘paradise’ 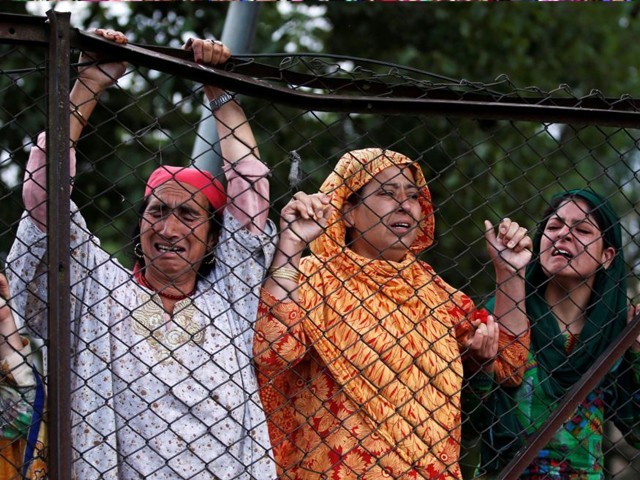 Kashmiri women mourn the death of Burhan Wani, a separatist leader, during his funeral in Tral, south of Srinagar, July 9, 2016. PHOTO: REUTERS

Let me tell you a tale, a story filled with reality.
Kashmir destroyed by tyrants and their cruelty.

Where women are assaulted and children are not spared.
The rulers are the murderers and the ‘security’ men feared.

Pellets to blind, tear gas shells to choke you.
Jails to languish, bullets to kill you.

They’ve empty hearts, their blood is cold.
Some among us are theirs, their faith is sold.

The children of ours, tormented and in trauma.
Then they’ll try to fox you and do all the drama.

A little boy, they inserted needles into his eyes.
Slapped, tortured him and then came up with lies.

India, the most tolerant is what they call themselves.
But tales of their bigotry have filled our shelves!

They’re yoking our existence, enchaining our minds and actions.
Wearing us off and weakening us, dividing us into numerous fractions.

Pellets are non-lethal is what they reiterate all over again.
Six thousand injured by these and 1,314 made sightless, God what a pain!

They are liars and slayers; all they do is excruciating and lethal.
Their ways are agonising for us and their rule is fatal.

These nights of slavery are utterly aching.
Man, to see a toddler kick the bucket is heartbreaking.

Insha, the little girl left blinded and in total agony.
Such stories are not one but many and many!

Don’t ever thou call this valley a ‘paradise’!
Why? 100,000 slaughtered thus far, this should suffice.

Daughters raped and our sisters made widows.
Those who’re martyred protecting them or protesting, Kudos!

The whole world is witness to this bloodshed, complete massacre.
Totally voiceless they are, little do they dare!

‘The mystics of today are devoid of warrior’s rage’.
True that Iqbal, Muslim combatant can’t feel free in cage.

The cage built by our enemies, the adversaries of Islam.
O people! You can’t be indifferent and how can we stay calm?

Our movement shouldn’t be a deviance but a true struggle and cause.
Too much blood lost, can’t afford a hiatus and not even a small pause.

‘Has my ‘takbeer’ not broken your charm?’
Nay Iqbal! Our youth today are unequipped of Haider’s arm.

All day we long for freedom, an intense yearning!
But with no true efforts being made, each morning is mourning.

Gone are the years when we had true character in us.
Freedom, a cause of sacredness made total fuss.

The youth are charmless with no understanding.
Omar Mukhtar, men like him not even in the making.

Many take it as entertainment, trying to become a Rambo!
Motivated men bring emancipation, never does a Yobo.

Iqbal, you said, ‘The faults of one man nature can reprieve’.
But when countless among us are the ‘black sheep’, what else but to grieve?

‘I know the modes of those who guide the creed’.
They’ll tell you lies, teach you falsehood, what’ll such education breed?

We’ve to fight till we’re free; this should be the plan and is the only way.
With all the clans integrated, willing to sacrifice with no delay!

We won’t win unless we fight them the way Muhammad (pbuh) taught us.
That will bring us the grandeur and glory he had once brought us.

No doubt, we’ve been enslaved for so long and long.
But one day, towards freedom we’ll jubilantly throng!

The author is a 19-year-old and hails from Indian administered Kashmir. He is a keen student of Philosophy and International Relations. He tweets @aahmedbinqasim (twitter.com/aahmedbinqasim?lang=en)

No peace under occupation: My parents are alive, but the conflict in IoK has ‘orphaned’ me

Waking up on Eid as a broken and crippled orphan