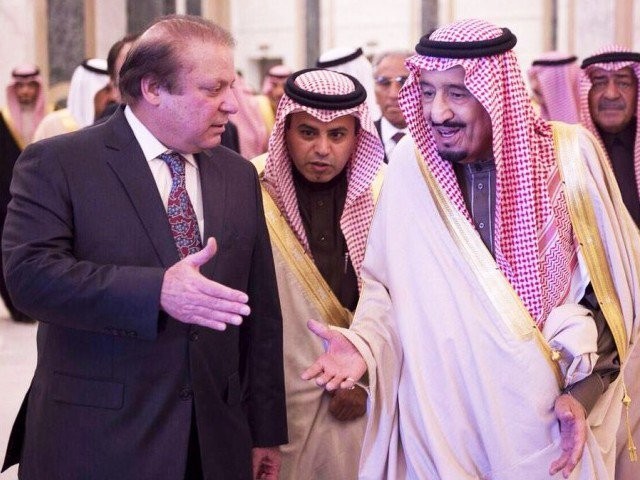 At the beginning of this month, the government found itself in something of a pickle. Regardless of a dubious WhatsApp call fiasco and alleged political proclivities of the joint investigation team (JIT) members, the Sharifs had failed miserably in elucidating a tangible money trail for their opulent assets abroad. To truly offset the velocity of the storm they faced, they would have to counter attack with something far more potent and invidious – something powerful enough to offset the damning reality of their inconclusive money trial – a global conspiracy.

A conspiracy that was hatched in collusion with the venal folks in the General Headquarters (GHQ), intending to downsize and eventually dispatch the popular Punjabi leader who had placed Pakistan on the itinerary to economic alleviation, was executed by the ever opportunistic Imran Khan. Now that’s the magnitude of sophistry required to unsettle the Panama onslaught, and that’s exactly what the Pakistan Muslim League-Nawaz (PML-N) is attempting to do.

But who is conspiring against Nawaz Sharif and why are they doing it?

India and the US

Amidst the bellicose anti-Pakistan rhetoric, Indian media and social media alike seem to have developed a soft spot for Nawaz. Whether by default or through the careful manipulation of the media and scheming Doval-ites in New Delhi, Nawaz has fit perfectly into the quintessential Indian exposition of a helpless civilian leader in Pakistan.

Regardless of the flaws in this narrative, it clearly becomes a non-sequitur that any possible conspiracy against Nawaz would be incubated or even facilitated by our neighbours who seem positively horrified by his present crucibles.

No conspiracy against democracy is ever worth its salt until reference is made to the Ziaul Haq coup in 1977 and by insinuation, the infamous words of then American ambassador as Bhutto’s fate was sealed,

“The party is over.”

But is there any motive for the US to conspire against Nawaz, as there was against Zulfikar Ali Bhutto?

It is true that the US has long accused the South Asian nuclear power of remaining lethargic in its persecution of the Haqqani network and complacent in the alleged facilitation of the Afghan Taliban. The on-going South Asian policy review under the Donald Trump administration is also expected to wield a more aggressive US posture towards Pakistan. Thus, American frustration with Pakistan is undeniable.

However, the said disaffection doesn’t necessarily provide motive to plot against Nawaz. No amount of pressure or displacement of Nawaz can solve a mess that isn’t his to begin with.

In fact, if anything, the current government has attempted to distance itself from the dark game of terror abetment, resulting in the now infamous Dawn leaks saga. Clearly, the incident was intended to be emblematic of Nawaz conforming to the West’s narrative regarding the establishment’s transgressions, a message that leaves no motive for Washington to go to such lengths to remove Nawaz, who is of little relevance to them otherwise, let alone a source of threat.

Now this is where things start to get interesting. Back in 2015, when the Saudis first requested military assistance from Pakistan to aid their operations in Yemen, most considered it a forgone conclusion that the proverbial ally and perpetual mercenary of global politics would easily oblige. Surely, Saudi Arabia’s generous financial assistance, such as the 1.5 billion dollar ‘gift’ in 2014 to stabilise the country’s foreign reserves as well as their long standing consanguinity with the Sharif clan made it almost implausible that Pakistan could do anything but.

What materialized, however, was arguably one of the most gusty and astute foreign policy responses in the history of our country. The civil-military leadership decided in conjunction that any overt interference in the Middle Eastern conflict would almost certainly stoke the fires of sectarianism at home. To buttress their strategy, a joint session of parliament was called to decide on the matter. The answer was as expected – a resounding rejection of military adventurism abroad.

Whilst the government gained plaudits at home, the Saudis took its inertia for betrayal, along with the rest of the gulf allies.

The betrayal was personal as well as national. The Saudi royal family had been xenial hosts to our prime minister during exile. Not only that, they had been instrumental in exhorting Pervez Musharraf to allow the Sharifs’ return to Pakistan in 2007. For them, Nawaz was their man, a man in debt.

And there’s your motive. Nawaz disillusioned the Saudis by choosing national interest over personal duty just when they needed him the most, causing an injury that demanded retribution.

Further aggravating the situation was Nawaz’s co-opting of the Qataris to bail him out via the now infamous letters. Nawaz’s Panama conundrum just happened to occur at a time when the Gulf Cooperation Council (GCC) had finally decided to charge list the Qataris, making it the opportune moment to level the scores with Nawaz as well as get one over Qatar.

And so when the request for mutual legal assistance arrived from the Panama JIT, the UAE ministry of justice, notoriously lethargic in responding to such pleas of foreign assistance, acted with astounding swiftness to negate multiple documents provided by the Sharif family regarding share sales and scrap transfers, documents that formed the backbone of their given money trail.

Another thing to note is that matters pertaining to validation of documents at diplomatic requests are usually convoluted procedures requiring longer than just 60 days to conclude. Out of the six countries besides Qatar from whom mutual assistance was requested, only one has responded thus far.

If one were willing to buy it, the UAE’s eagerness to aid the proceedings against Nawaz then begin to seem a little inimical. Suddenly, at least ostensibly, the pieces of the puzzle seem to fit and resemble at least a half-convincing theory of an external plot to remove Nawaz.

Now, add to this mix the Saudi royal family’s newly found blue-eyed boy, the sipah-salar (military commander), Raheel Sharif. Here is the bitter reality – Raheel Sharif was never the animal we were told; he was a straight soldier content within the confines of his constitutional role. His social media wing’s sycophancy, elevating him to a status beyond need or purpose for any head of a state institution, was evidence of this. His forbearance during the dharna was simply part of the larger contrivance to rule without actually ruling. As his end drew closer, the obstinate elder Sharif hoped there would be no extension, something his younger brother strongly opposed. By the end, the civil-military fiction manifested itself quite clearly in the Dawn leaks episode and all was not well at all.

And so, the theory takes form in a familiar framework. The military establishment is worried about facing a fourth time prime minister with popular grass root support from Punjab. Armed with such political capital, Nawaz would be perfectly placed to incubate fundamental shifts in the civil-military dynamic by cutting off GHQ’s tentacles within foreign policy and domestic affairs, downsizing it to its constitutional role.

To prevent this and obstruct the seemingly irreversibly ascendency of Nawaz, the GHQ co-opted Raheel to be the facilitator between them and their unlikely accomplices – the house of Saud and the gulf states.

Now, that’s quite a tale isn’t it? For PML-N strategists, the above-knitted amalgamation of events seems to be their best shot at concocting any kind of a convincing conspiracy-driven narrative. But alas, even their best shot is heavily punctured.

Nawaz is simply not the reformer that’s going to overthrow the establishment status quo and wrestle the initiative from the GHQ. If he were, he would have done it with the overwhelming majority he has now, rather than allowing his discretion to truncate via dharna politics and deferring all matters of India and Afghanistan to the military. If anything, Nawaz will return a less emphatic victor in 2018 than he did in 2013. The incumbency factor coalescing with Pakistan Tehreek-e-Insaf’s (PTI) new found pragmatism in recruiting ignominious electables will ensure a smaller majority and a far more amenable Nawaz.

To think that the GHQ does not know this would be naïve. To think that the GHQ would still attempt to usurp Nawaz, a known phenomenon, and pave the way for loose cannon like Imran would be pushing credulity to its limits. Yes, Imran has been manipulated to further Pindi’s interests before, but only as a spoiler. Conspiring to augment his role from pressure cooker to prime minister, instead of the tamed lion of Punjab, would seem an unnecessarily risky venture.

As for the Saudis, yes, they have personal grievances with Nawaz. But what could they have possibly done to influence an organisation of journalists whose members are instrumental in exposing their own regime’s egregious human rights violations? Yes, the request for mutual assistance was uncannily expedited, but how does that dilute the veracity of the information provided by the UAE ministry of justice?

It is also pertinent that Pakistan’s decision to refrain from direct involvement in the Yemen conflict reflected the general mood across the nation at the time, with the entire political class and intelligentsia collectively clamouring for restraint. It is highly unlikely that Nawaz or any other premier for that matter could have resisted the pressure and echoed the Saudi war cry. And you can be sure that proper apology and clarification along these lines was provided to the Gulf allies, assuaging their rage enough to preclude them from envisaging and executing any kind of a conspiracy to topple Nawaz.

Thus, even though a Gulf-driven agenda against the government may seem ostensibly convincing for a split second, only a brief dissection reveals the truly half-baked nature of the most convincing claim to victimhood the noon league may have. It remains, in essence, some way short of sophistry and still firmly within the category of pure and unadorned tripe.

And even if the noon league could do any better in postulating imagined entrapment, nothing shall prove enough to mitigate the lies, contradictions and blatant corruption of the first family. This one time, they have been caught out for good.