Muslim immigrants: A cold shoulder for a bad reputation 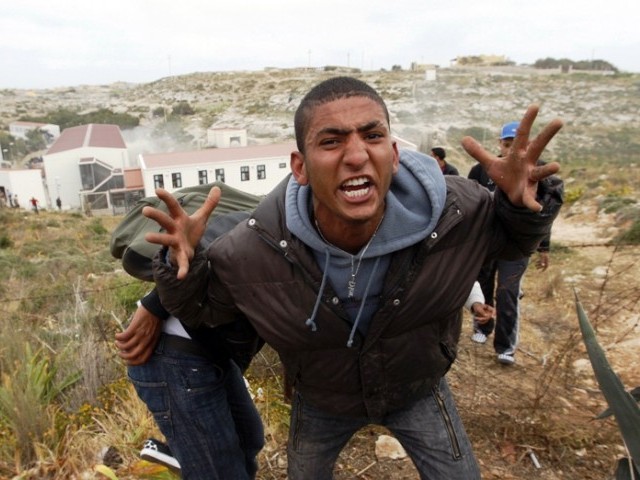 A man who fled the unrest in Tunisia shouts after being sent back to his country PHOTO: AFP

After the great Messina, another tsunami has embarked on the shores of Italy. But this time, it is not water that is causing problems.

26,000 immigrants belonging mainly to Tunisia and Libya have arrived on the island of Lampedusa – a number larger than the total population of the island. Earlier, Italy had taken responsibility for 20,000 immigrants.

As the immigrants keep pouring onto the shores of Italy, it is looking towards neighbouring Schengen countries to lend a helping hand. The Italian government has decided to issue a six month Schengen visa to these immigrants, a move that has given jitters to the European nations. Some are calling it the ‘mafia method’ of Italy.

France is already struggling to create jobs for its people, and has probably been most skeptical of the decision taken by Italy. The expulsion of Romanians a few months ago was a clear indication that immigrants are not wanted in France. The recent ban on the hijab reinforces this ideology. So it can be said that France cannot be persuaded to take these immigrants even though most of them claim to have French relatives.

France has tightened the control of documents and is taking all necessary measures to ensure that these immigrants do not enter their territory.

Austria might not be as hostile to immigrants as France, but stands firm that it is not going to take them in. It has warned Italy that if it presses them on this issue, they will be forced to take the same measures as France.

“Italy is a nation that can still show a bit more goodwill to seriously resolve the issue”, said their interior minister, a clear indication that they want Italy to deal with these immigrants themselves.

Germany considers them ‘economic immigrants’ who have come to Europe just to earn their livelihood. Germany is probably the only country in Europe which is still welcoming people from Asia and Africa for education and career opportunities. If it does not accept these immigrants, the probability of other countries taking accepting them is pretty bleak.

Other countries have also shown their concern on this issue. The Spanish interior minister has pointed out that taking these immigrants “will pave the way for crime”, which is not acceptable. Italy and France are patrolling the seas to prevent more immigrants from reaching Italy.

We can blame these countries for not showing enough sensitivity or blame the dictators of the respective countries for bringing misery to their people. But I feel that as Muslims, we have ourselves to blame for being so corrupt and deceiving that no one wants to give us refuge, even during dire situations.

Muslim communities in European countries have always had a huge share in illegal activities. Another important factor for reluctance is the burden that immigrants can be on the economy. More people are losing jobs in these countries and it will be difficult for the government to provide a means of income for everyone.

Let’s face it, as Pakistanis, we are not ready to take in Afghan immigrants because of the worsening law and order situation and the impact that an influx would have on our economy.

We can’t blame the Europeans for sharing the same concerns.

A graduate of the Ghulam Ishaq Khan institute of engineering sciences and technology who blogs on baidaar.blogspot.com