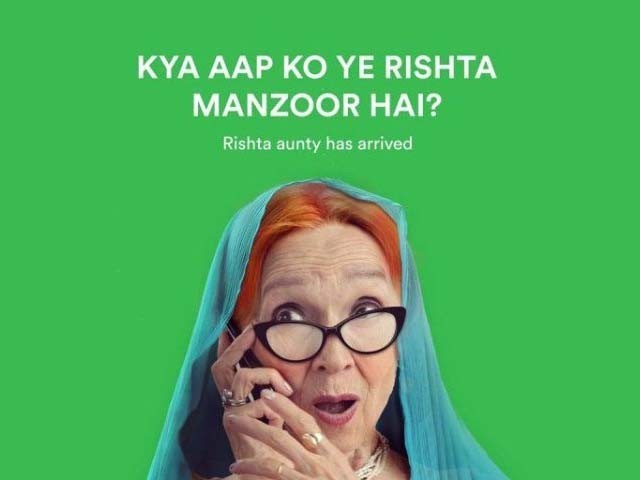 I’m not against going to a rishta aunty you’ve heard about from someone and availing her services to find a match for myself or for a loved one. But doing so in a taxi seems inappropriate and unnecessary. PHOTO: FACEBOOK

There are two things Pakistani’s are unabashedly and unapologetically obsessed with – discounts and shaadi (marriage). By combining these two, I have to admit that Careem’s new rishta aunty service is quite genius.

No, I did not want to be woken up on a Wednesday morning (Wednesday being the most annoying day of the week) to Careem telling me my “rishta has arrived”. I honestly thought maybe I accidentally ordered a cab and the driver’s name is Rishta, Rishta Khan or something? My brain did not have the energy to solve this mystery, especially not on a Wednesday.

When I got to work, I found out that it’s actually a new campaign launched by Careem where you can book a certain type of car which will have a ‘professional’ rishta aunty accompany you and help you fulfil your dreams so that you never have to book a cab all alone again.

The poster is very appealing with a gori (foreigner) old lady with red hair and what seems to be a photoshopped dupatta on her head. Her hair seems photoshopped too. Maybe they made it red so people could relate it to the ladies who dye their hair with mehndi (henna)? Either way, I’m not buying it. I don’t trust this aunty. If they’d have used the bik gayi hai gormint (this government has been sold) aunty, that would’ve been a better fit.

So, I’m not sure if Careem’s marketing team launched this because they are actually concerned about the rising number of kunwaras (singles) in Pakistan or whether they did this just to attract people into booking rides for the fun of it.

What people forget to realise is that marriage is, or at least was, a sacred institution. This campaign is making a joke out of it. It’s not just matchmaking, it is playing with people’s lives and futures.

Let’s say that people do try it, how would it play out? You book a ride and a rishta aunty accompanies you, simple as that. Has anyone ever met a rishta aunty? I’m not judging their profession, but most of them are known to be blunt and prying ladies. They, being complete strangers, will ask you strange questions about your height, weight, class, cast, religion, religious sect, the sect within that sect, your monthly income, what each of your family member does and other very personal information.

All this would be in front of another complete stranger, that is the Careem captain who we generally try to give as little information as possible to so they don’t start stalking you or become one of those late night missed callers and ‘friendshippers’. I’m not sure the people who came up with this idea actually thought it through.

Or maybe they did think it through, as they decided to monetise on the one thing Pakistanis are very concerned about – marriage (their own marriage and other people’s marriages). The company wanted to play on the desperation some people have to get hitched, especially girls who have a constant ticking time bomb on their heads as they age.

This, I feel, does not go with Careem’s image.

Careem has lost their mind as much as I have lost hope from this world. This was actually creepy.#Careem #Karachi #Rishta #Taxi #morning pic.twitter.com/gh30uMPpyZ

I, for one, have always been an avid supporter of Careem as a service and always appreciate their fun marketing tactics. Like the one right before Eid, when you could book a ride with a barber. That was creative and catered to people’s urgency right before Eid.

If Careem were looking for innovative ways to help and rope in its young clients, they could have perhaps opted for a career or education counsellor.

Hence, this rishta one has been my least favourite.

I’m not against going to a rishta aunty you’ve heard about from someone and availing her services to find a match for myself or for a loved one. But doing so in a taxi seems inappropriate and unnecessary. It plays with people’s sensitivities in a culture like ours and shows marriage in a comical light when, considering the rising divorce rates, getting married or finding a partner should be anything but amusing.

Someone I know actually tried this rishta aunty service yesterday and what they had to say was not far from what I had guessed. Just as I had suspected, the rishta aunty turned out to be too poking, intrusive and claimed to not give any guarantee if the match she found is already married or would want to marry again in the future.

She basically said she can’t be held responsible for anything except finding the ‘perfect’ match for you and would charge approximately Rs50,000 only. Furthermore, if it couldn’t get any creepier, the rishta aunty was very insistent upon taking pictures of the girls in the car. Judging from this, it is safe to say that this ‘community engagement initiate’ was not well-thought out and perhaps Careem should put an end to it before anything creepier happens.

As a loyal Careem customer, I would advise the company to focus more on further improving the quality of their services. As a Pakistani, I sincerely request that we please move on from weddings and marriages and onto to something more interesting.

The highlight of yesterday was when Careem’s competitor, Joy Cab, posted a hilarious marketing gimmick that said,

“While Kareem uncle is busy finding rishta, we are busy providing best rates and no peak factor.”

Talk about raining on Careem’s parade (pun intended). Hearing about more experiences of people who tried the rishta aunty cab has left me more bewildered.

Whatever it is that Careem was trying to or has achieved by this, I fail to understand. All I can say is yeh bik gayi hai gormint. Why? Just because…