Is the veil not cool enough for France? 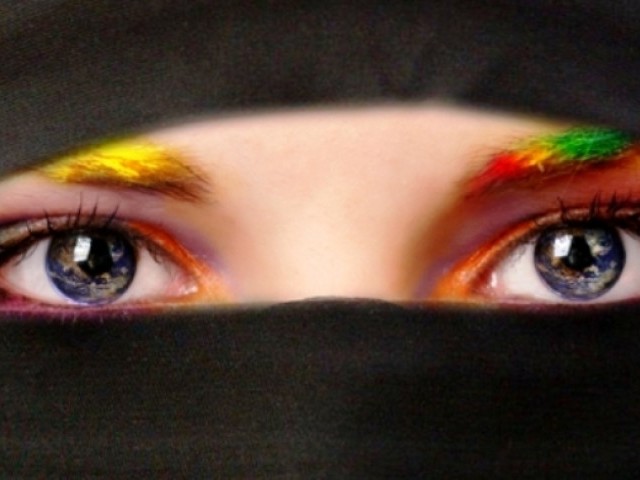 Whose concept of modernity are Muslim women supposed to accept and adhere to?

Is it difficult to be a woman, a Muslim and a self-proclaimed fighter of gender discrimination – and not support the French government’s ban on the burqa?

Nope, no problem. In fact, I feel I am in a position of advantage as a member of a religion that has come under fire from the world’s democracies as well as an outspoken advocate for  equality for both sexes. Let me iterate here: I do not support the ban on the face veil. It is tantamount to human rights violations against minorities.

What is French culture?

The French government’s ban  says that the face veil is discriminatory against women and a symbol of oppression and servitude. A veil doesn’t allow women to integrate into society (French society in particular)  and distances the Muslim population from adopting French culture and values.

In the drama that has followed the arrest of a woman who dared not to bare, the one question that keeps nagging me is this: What is French culture about? Is it just Guccis, Pradas and other designer brands that cater to a ‘Westernised’ concept of beauty?

Whose concept of modernity are the Muslim women supposed to accept? If they give up their full body shifts and adopt jeans and shirts, would they be representatives of a modern French society? Do they need to have shimmery cosmetics and leather bags? Do women in French provinces and villages really have similar clothing choices? I doubt it.

The ban is imposed on one tiny section of an already tiny Muslim population. Roughly 2,000 of the 5-6 million Muslim population in France prefer to wear veils. If a dress code is being enforced, let it be uniform. Perhaps the government should codify the dos and don’ts of what is appropriate or inappropriate to wear in France. Then we can all follow the dictum: when in Rome, do as the Romans do.

Some feminists have strongly supported the burqa ban, saying it’s an anachronism and outdated tool of patriarchy. Honestly, I agree with them. From a religious viewpoint, it’s clear that the Holy Quran doesn’t make any reference to a full body or facial veil at all. It suggests that women and men dress modestly. It’s no one’s fault that power-hungry clerics decided to interpret and twist those wordings to their own benefits.

However, face veils and head scarves are not just religious. They also form a part of many other cultural and ethnic traditions around the world. How can a democratic government force a minority population to give up their cultural and ethnic identities or signifiers? Why shouldn’t citizens have the right to express their religious affiliations through their clothing when it really doesn’t affect public discourse?

Why don’t all of us who are fighting for the rights of the ‘oppressed’ Muslim women take a vote of confidence first? Let’s ask them if they want to be represented by us. The so-called progressive, anti-religious, anti-cultural feminists who want to push their agenda and their idea of equality on to women who might have different viewpoints about equality. Do we ever pause to think about those women who willingly choose to adopt religious symbols or outward signifiers as a mark of their practice?

It is against the values of fraternity and tolerance to criticise religion as an outdated institution and champion the cause of a non-religious, secular existence. Every human being belongs to a group, community, class, idea, ideology, circle or affiliated to institutions and clubs.

What would your first reaction be if your membership to a club was denied or revoked on account of your clothing, religious background or the language you speak? For women who do not want to wear the veil, all measures must be taken to support them with resources in the form of helplines, NGOs, civic institutions that reach out to distressed women, etcetera.

The French government should focus on issues of illiteracy, poor economic index or other kinds of abuse that might occur in Muslim households as in other non-Muslim families.

The French ban on the face veil is nothing more and nothing worse than bullying. French Muslim women and men are not forcing their customs on non-Muslims. French Muslim women – unlike their Saudi Arabian counterparts – have access to professional and career choices, education and literacy, social and political participation, financial independence and what not. Give them the freedom to dress as they please.

On the face of it, it is the ‘liberals’ who are behaving like those frequently labelled as ‘orthodox’. I smell fear, and it is against Islam.

A social worker based in Hyderabad who blogs at trailofpapercuts.wordpress.com and tweets at @culture_curate.

Digital piracy: Sharing is not stealing