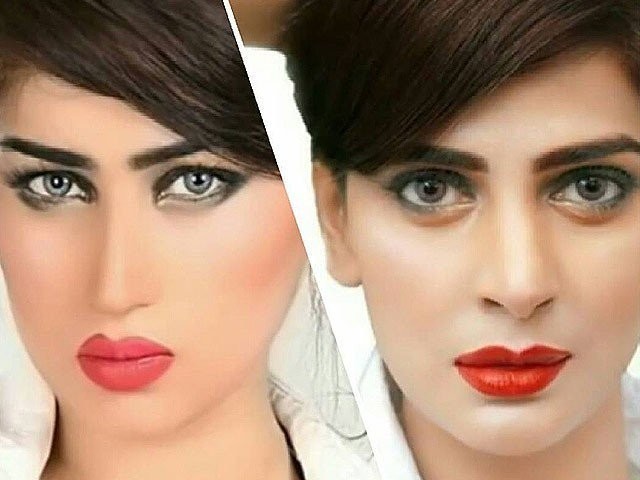 It remains to be seen how the drama deals with the layered, complicated, uncovered truths of Qandeel’s life and death. PHOTO: INSTAGRAM

The year 1994 saw the release of the biographical film, Bandit Queen, based on the life and times of India’s famous dacoit who went by the name of Phoolan Devi. The director and producer of the film proudly claimed it to be a ‘true story’. However, it was only a matter of time before critical acclaim and raving reviews started pouring in from all quarters.

It was then that the Booker Prize winner Arundhati Roy picked bones with the movie. She said that making such a movie was trespassing of the vilest degree. Devi was alive when the film was released and yet she was not allowed to watch it. Furthermore, a point that worried Roy was the fact that Devi still had cases pending in court and this film could have been a cause of great influence. In articles charmingly titled ‘The Great Indian Rape Trick’, Roy lividly bashed the film for the compromises (which were many according to her) it made in the name of artistic liberty.

It’s 2017 now and Pakistani television is all set to air a biographical drama based on its hugely controversial social media star, Qandeel Baloch. The teasers of the show, titled Baaghi, with a bold Saba Qamar staring into the camera and saying lines in Qandeel’s phoney accent are already making rounds on social media.

While some are hailing the show for having departed from the usual regressive storylines typical of Pakistani dramas, the detractors far outdo the appreciators. Qamar’s instagram, for one, is a battleground already.

That’s the problem with true stories based on strong and controversial characters, you can never play it safe. And then you stick to the digestible formulas – woman oppressed, wronged by society, takes her revenge and a happy ending, yay! (And gets killed also because well, who doesn’t?).

Roy’s primary problem with Bandit Queen was that it tried to forge a direct action and reaction story, notwithstanding the many complexities Devi was wrought with. It tended to completely overlook Devi’s initial skirmishes in her village over land disputes and tried to make it a simple rape versus revenge story, just so it was more easily gulped down by the audience.

“She didn’t need to be raped to protest. Some of us don’t.”

But you have to tone down a fiery woman for her to be liked by the audience.

But how do you do this to Qandeel, if at all you should do this in the first place. Also, best of luck if you don’t!

The film on Devi was based on various versions of the truth, Mala Sen’s book, ‘India’s Bandit Queen’ most prominently.

What sources do we have in regard to Qandeel’s life though? The conjecture, assumptions, hearsay and half-truths, because who can know for sure?

It might seem awry to juxtapose Bandit Queen with Baaghi, but the underlying issue here is similar. Biographical videography on two South Asian women that defied all odds, pushed the limits a bit too far, along with court cases pending for both.

With Umera Ahmed as the writer and Qamar playing Qandeel, the drama is sure to create some ripples. It hasn’t even claimed to be a ‘true story’ as yet, but the problem is that it won’t be long before it becomes the standard edition of the truth for everything related to Qandeel.

Even after her death, Qandeel’s haters outnumber her supporters by thousands. So much so that even mildly liberal people who don’t find any justification for her murder start with saying,

This is how tricky it is dealing with Qandeel. If the teasers are anything to go by, a poor, indigent Qandeel (or Fauzia Azeem as was her real name) is shown being thrown around, harassed and often being beaten. There’s the alluring trap.

To make Qandeel’s story a tale of rising against an oppressive society might not be the full measure of who Qandeel as an individual was. Maybe her videos were more than just a response to the people who had wronged her.

That’s the problem with true stories based on strong and controversial characters, you can never play it fair.

Among the major problems Roy had with Bandit Queen were its assumptions and the repercussions that were bound to follow. The Behmai massacre episode, for one, underscored much of Roy’s problem with the movie. While Devi said she was not present in Behmai that day, some eye witnesses testified that she was. The movie showed her in the village, nothing more and nothing less. Roy feared that the power of the media and its impact on public opinion could easily alter the outcome of Devi’s cases.

Accordingly, the drama on Qandeel presents the same legal tribulations. The investigating officer in Qandeel’s murder case has already admitted in the BBC Urdu documentary that as soon as people go off camera, they are adamant on claiming that Qandeel probably deserved this fate. However, there’s very little known about Qandeel’s tragic demise which makes it difficult to portray it efficiently.

As many have already pointed out, it seems a bit unfitting that Qandeel’s brother would kill her for ‘honour’ after she had consistently challenged those conventions. If it was a mere honour killing, wouldn’t it have happened earlier?

The encounter with Maulvi Qavi and Qandeel’s pleas for protection (since she was allegedly getting threats from the man) are another point of contention. Will the drama be able to explore all these dimensions and that too on solid foundations? Will it be able to lock horns with the religious right? And if it doesn’t, then what’s the point of this whole exercise?

The murder of Qandeel was condemned internationally. Qandeel’s parents have gone on record claiming their honour wasn’t threatened by her and that they’d like to see their son hanged for this murder. All in all, it’s unlikely that Qandeel’s murder was a simple case of honour killing. It will be a shame if the drama presents it just as that.

It remains to be seen how the drama deals with the layered, complicated and uncovered truths of Qandeel’s life and death. What the producers should never lose sight of is the responsibility they’ve taken upon themselves. It is henceforth going to be Qamar against Qandeel, and no points in guessing who the people will take more comfortably to. Seema Biswas, who played the role of Devi in the aforementioned film, went on to say the following about her character,

“When I was selected for the role, I read every report on Phoolan Devi and looked at her picture for hours on end to understand her. When I was done with all this, I realised I had formed an image of her. After this I did not want to meet her because I did not want any contradictions to the image I had formed of her.”

Sounds all heavy and fantastic, except Devi threatened to immolate herself outside a Delhi cinema as she was denied a screening of the film by the producers, worried it had spun around many fallacies of her.

Qamar and her team don’t have the chance to meet Qandeel and neither do they risk inspiring her ire. But her case is under procedure in the courts. Dealing with an issue as important as honour killing and what they show on our TV screens has the potential to impact that impressively.

It’s laudable to attempt something this brave and bold, but to attempt it wholesomely while balancing artistic liberties with the truths and dilemmas of a real person’s life is the real task. And that perhaps is the problem with true stories based on strong and controversial characters – you can rarely play it right.