A Kashmiri’s letter to all Indians: An attack on Amarnath Yatris is an attack on Kashmir 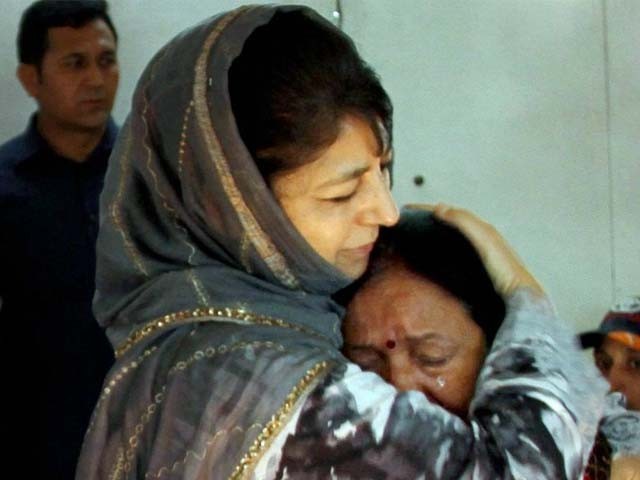 Mufti also consoled pilgrims in Srinagar while the Jammu and Kashmir government announced an ex-gratia of Rs six lakh for the families of the seven Amarnath pilgrims. PHOTO: PTI

I am writing this with much pain and grief. I’m left with no words of condemnation for this dastardly brutal act that was carried out to kill innocent Yatris devoted to their faith.

My purpose of writing to you is not to condemn the act alone, but to let you know that we, the people of Kashmir, are equally pained and our heads hang in shame due to the act of a few. This act is against our ethos and composite culture of religious harmony.

Terrorism has no religion, and unfortunately, we have been the worst sufferers of it –witnessing brutality, mental pain and helplessness day in and day out. Our lives are different from yours; they are full of compromises and beyond our control.

After a certain point, we are mute spectators to the political turbulence and the senseless violence around.

This terror attack doesn’t represent us

We have lost our dear ones to terror, including the Kashmiri Pandits, without whom we are still incomplete. The valley of roses has become the valley of loudest cries, the ghosts of terror still haunt us, but today we stand in unison and outrightly condemn this act in unequivocal terms.

The Amarnath Yatris who are on a journey of faith, are our beloved guests. We understand the sanctity and devotion with every right thinking Kashmiri looking after their security. Local Kashmiris have been the traditional managers of this sacred pilgrimage. They have always facilitated this, even during the protests that shook Kashmir in 2010 and 2016.

However, this singular act, which was perpetrated by those who do not represent us, our culture and our aspirations should in no way be taken as an outlook of the majority of the populace.

A few weeks ago in the holy month of Ramazan, on one of the most blessed nights, an innocent police officer who was a Muslim by religion, was lynched to death. It shows that terror has no religion and knows no bound of humanity or justice.

Kashmir has a tradition of synthesis

Kashmir has been deeply engulfed in this war of politics and terror and there are elements who want to create a divide between communities. There might be a trust deficit after this unfortunate incident, but let not the spirit of humanity die.

This trust deficit between us might give birth to a communal apocalypse.

Before we concern ourselves with the past, or what is happening in the present, we must also know that the tradition of Kashmir speaks of synthesis – a mystical synthesis of Shaivism and Islamic Sufism.

In the early 14th century, a mystic called Lal Ded, who was known as Lalla Arifa to Muslims and Lalleshwari to the Hindus, preached Kashmiri Shaivism. She went on to mentor Sufi saint Sheikh Noorudin Wali, also called Nund Rishi, the patron saint of Kashmir.

Yatris will continue to be our guests

This gruesome attack is not only on our unsuspecting guests, but also on Kashmir and its ethos.

We shall have to rise against this scourge together as a nation and defeat the ideology of terror with the spirit of humanity and brotherhood.

The overwhelming condemnation and anguish expressed by Kashmiris on the shameful attack on Yatris must be an eye-opener for those who did it. For us, the Yatris are our guests and this is an indisputable fact that they will continue to be so.