Could Nawaz Sharif’s fate determine the future of Pakistan’s stock market as well? 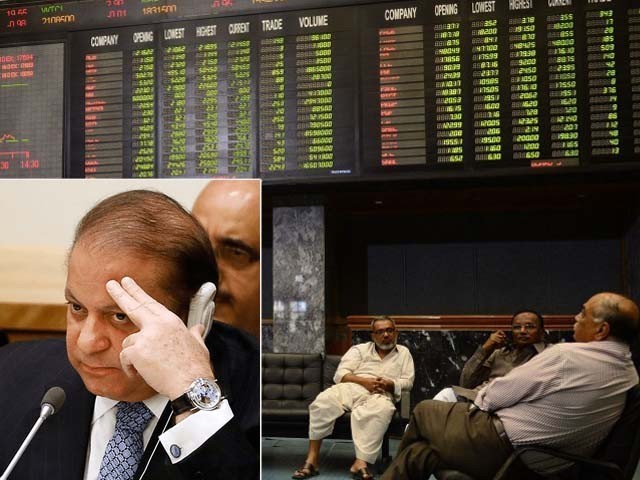 While the stock exchange touched its peak near the date of Pakistan being classified as an emerging market by Modern Index Strategy Indexes (MSCI), its fall is coinciding with unexpected foreign outflows in the market and political turmoil.

In one of my previous blogs, we highlighted how the stock market should be utilised as an investment vehicle. For the record, Karachi Stock Exchange (KSE) 100 Index went up by +50% from that day and stayed the same for the next 24 months.

While sceptics have resurfaced – and so have the bears in the market (which is down +15% from the peak levels) – to criticise the vulnerability of the economy amidst political impasse, it is crucial to holistically view the changing political and economic landscape of the country.

Chronologically speaking, let’s see what has gone against the major political parties of Pakistan.

The focus seems to be on the second largest political party which has been rife with corruption allegations. Be it matters related to policing powers in regard to the Rangers in Sindh, or the corruption cases against loyalists such as Dr Asim Hussain, Sharjeel Memon, Nisar Morai and Anwar Majeed, PPP has witnessed a major shakeup.

The presumed de-corruptisation should bode well for the country, hopefully.

It hasn’t been long since anti-state allegations were levelled by Zulfiqar Mirza against the largest political party in Karachi. Further agitation by the London-based leader, Altaf Hussain, led to the creation of a political alternative, Pak Sar Zameen Party (PSP), for the Urdu speaking community, led by Mustafa Kamal.

Furthermore, it led to blanket raids and arrests of MQM-P workers allegedly involved in criminal activities. Again, the presumed de-criminalisation should bode well for the country, hopefully.

So why did people believe that the Pakistan Muslim League-Nawaz (PML-N) would be spared?

The current on-going trial against the PM and his family is now being investigated on charges of corruption, concealment of assets, tax evasion and lying to the court. All this may be a precursor to induce a wake-up call for a political party with an overwhelming majority in Parliament. A word of advice to the PML-N – don’t be arrogant or complacent and avoid assuming a clean sweep in the next elections.

With less than a year to the 2018 general elections, what we are observing is the ‘systematic cleansing of democratic parties’ to improve the very governance of democracy. The recently induced panic within the ruling elite may just be enough to give a popularity dent to PML-N.

A change of face – if the honourable court refers the case to the National Accountability Bureau (NAB) and requests the PM to resign – in the form of a relatively non-controversial PML-N stalwart (did I say Ahsan Iqbal?) might just ensure the continuity of the party.

Back door diplomacy to ensure the survival of the heir apparent could come in handy these days. That may be a much better proposition than playing the victim card and taking on unwarranted confrontation with the military by hinting at a ‘director abroad (another Sharif?)’ and local actors.

Wait, what about the economic risks and all?

Oh, please. The economic well-being of the country has now been deeply inculcated into the matter of ‘national interest’ in light of hostile neighbours and worsening geopolitical ties. Important to highlight here are the two most important politically un-related economic catalysts likely to keep the economy buoyant, even if the government does change:

1. Falling oil prices could not have come at a better time, thanks to the shale boom. If oil would have been at $80-100, we would have seen a much worse current account deficit, higher inflation numbers, higher interest rates and higher fiscal deficit, all because of high costs on domestic government borrowing.

The Darnomics (Ishaq Dar’s economics) scorecard would not have been able to stave off any of these had it not been for the increasing shale oil’s output.

2. The much proclaimed China-Pakistan Economic Corridor (CPEC)and terms of agreements signed between the two countries are inherently binding; they’re not up for discussion, even if there is a change in the government. Thus, we are not hearing any comment from China in support of the ruling party – a role previously undertaken by Saudi Arab or the US.

With the aforementioned economic stimuli, managing economic growth should be a lesser headache for any government in 2018 than it was for Dar in 2013.

While the stock exchange touched its peak near the date of Pakistan being classified as an emerging market by Modern Index Strategy Indexes (MSCI), its fall coincides with unexpected foreign outflows in the market along with political turmoil.

Currently, the shares of the banking sector offer 7-8% dividend yield, enough for retail investors to deploy their savings for the long term. The risks to the stock market are muted from current levels because movements in the share prices are driven largely by improving profitability and strengthening economic growth.

An extremely young population of Pakistan cannot really afford to buy real estate properties with savings of a few thousands per month. But they can very well participate in the overall improving economic sentiments stemming from CPEC and other improving indicators.

With one of the lowest market capitalisation to Gross Domestic Product (GDP) ratio in the region, Pakistan’s stock exchange has a long way to go despite this year’s politically induced correction. There is often a clichéd statement in the market,

“Buy when the blood is on the streets.”

The blood stains are beginning to appear for smart investors as of today.

For the foreigners, and even local investors, the imminent rupee depreciation and the reverse of it the very next day seemed like an embarrassing moment for Dar. He may want to be compared to Germany’s Finance Minister, Wolfgang Schauble, for charting out the game plan for the economic dashboard, but the stubbornness on keeping stable currency did undo his credibility, albeit marginally.

His game plan to borrow US dollar denominated loans is only workable if he manages the currency flattishly, otherwise the rising interest cost would render loans less payable.

As highlighted by Dar himself, 3.2% depreciation of currency causes a Rs230 billion loss to the economy in the form of higher nominal value of USD loans. He would definitely do his best to keep it ‘controlled’ and compensate the affectees through ‘targeted intervention’ and silence the critiques by offering export rebates and slapping import duties.

Howsoever brutal or diplomatic the verdict of the Supreme Court may be, the respondents may be asked to refute the charges and the ensuing legal battle can go on for longer than necessary for an impatient nation like ours. The ‘systematic cleansing of democratic parties’ is the actual ‘Naya Pakistan’ we were hoping for and what we are hopefully going to see now.