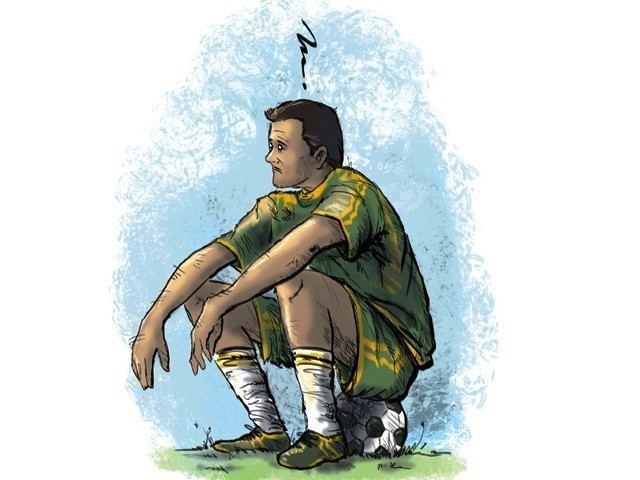 The problem lies in the absence of modern modules of the game. ILLUSTRATION: S. JAMAL

The arrival of Portuguese Carlos Queiroz as the head coach of Iran’s football team is an important development on the Asian football horizon.

The versatile tactician has signed a three-year contract with the country renowned for great football credentials, a proud history, talented individual and a good infrastructure. However, there must be reasons that provoked the established football nation to hire a European coach instead of local one.

Iran, once a powerhouse of Asian football, is witnessing a decline at international level. It failed to qualify for the 2010 World Cup and has not won the Asian Cup since 1976. Even teams like Saudi Arabia, Bahrain, UAE and Iraq are now considered average teams while Japan, Australia and South Korea have displaced them as the better ones coming out of the Asian region now.

The shift of power has clearly gone from West to East and this is because those nations have implemented the European football model in letter and spirit and assigned high-profile European coaches who developed their teams on modern system instead of the obsolete Asian style of play.

It is Europe, and not South America, where football development, research and modules are best practiced these days. No doubt Brazil and Argentina produces and exports the best football talent but it is in England, Germany, Italy and Spain where this talent is best groomed and turned into quality professionals.

In Pakistan, the national outfit got enough opportunities since the turn of the year against international opposition but failed to impress. Defeats against Thailand, Malaysia, Palestine, Turkmenistan and India in various events are proof of their dismal performance. For these matches, the Pakistan Football Federation (PFF) assigned highly qualified and experienced coaches in the country and who tried everything that they could think of to script a win. Inclusion of expats working their trade abroad, a line-up comprising young blood, long conditioning camps and training facilities outside Pakistan, nothing seemed to get the team winning.

The problem lies in the absence of modern modules of the game, a crafty system of player development and an organised team-mechanism under a qualified football professional. Without it, progress is impossible. And only a high-profile European coach can fulfill these criteria. Foreign coaches have never been appreciated in Pakistan but it is only because the PFF has hired mediocre individuals for this job and that too for short stints. They accepted the job just to add a feather to their career. A foreign coach does not mean that anyone outside Pakistan is capable or suitable for coaching the national team. It should be someone qualified and with sufficient experience and success as his credentials.

Pakistan will have to adopt the same policy. Instead of relying on local experts or under-rated foreigners, an established and experienced professional needs to be hired and only that could make the difference.

Financial constraints might be an excuse for the PFF in hiring such a highly paid coach but it is not impossible. For that, however, the importance of the need must be judged by the PFF and placed high on their priority list.

A columnist for The Express Tribune with a masters degree in mass communication from Karachi University.

How sport terrorism took over Europe and Pakistan in 2016

Why don’t we have a team for Pakistani expats in the PSL?

The dread that comes with Rio 2016