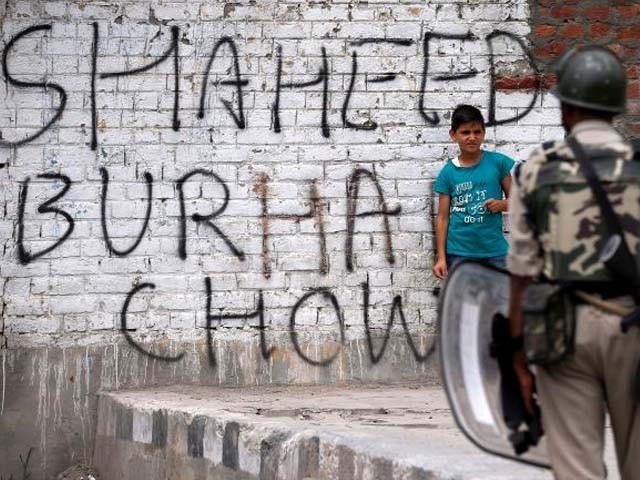 A boy stands next to a wall painted with graffiti during a protest in Srinagar. PHOTO: REUTERS

I can hear gun barrel thuds. Everyone around me is in shock. Ours is the house packed with mourners. My grandmother passed away two days ago. Twilight is nearing. We are supposed to serve evening meals to our relatives before they head home. But these fireworks and anti-India slogans in my neighbourhood are making their outward movement uncertain, very uncertain.

A disturbing word doing rounds is about the fallen Titan. Commander Burhan Muzzafar Wani has met a tragic end in Kokernag. I can hear a growing street commotion. Its defiant intensity is growing. Perhaps, a signature stone-smoke confrontation is about to start.

“How long is it going to continue,” I ask my father, sitting next to me.

“I don’t know,” he replies in a babbled manner.

Nobody is sure. Just nobody.

I stir the curtains of my room to look outside through an old window, my sightseeing spot for years now. But it isn’t the usual scene.

I can see the street outside surrounded by tall trees on its peripheries up to a distant point where a large grey smoke of tear gas shells is storming the sky. Not a single mortal is in sight. Only lumps of smoke coming out of everywhere.

I am 17, and never have I witnessed the awful feeling of helplessness and anger among people like in this night. I can hear their cries. I wonder in deep thought, ‘how long is it going to continue?’

Knowing all well how dangerous it is to saunter outside, all I yearn for is to go outside and join the mourners to vent my brewing anger. But immediately, my father steps in and shuts the window.

“Don’t take your head out!” he reprimands me. “Bullets don’t discriminate.”

The mourners are huddled in the lobby of our house. No one is daring to leave for their home. Most of them are praying,

“God protect all of us, and all outside.”

The popping sound of gunshots becomes louder as it comes closer and closer.

“I guess, they might have killed scores of people,” says one of my cousin brothers, terrified.

Escalating tension is depriving every one of their sleep. It seems, a relative muses, the dreaded 90s are back.

But the night seems unending. It’s getting longer and makes the idea of tomorrow terrifying. My mother’s welled up eyes are exposing her fears. She is scared of an incoming danger, so is everyone inside. We can’t even mourn.

“Protesters must be fighting a pitched battle in Shalteng Chowk,” uncle whispers.

“Gunshots can be heard from that direction.”

A small square of just 60 steps away from my neighbourhood, Shalteng Chowk consists of various stores of dull bricks on all its sides. People often are seen busy in their work there.

But that is past. Now the situation is different.

“I am scared of the police,” muffles my brother.

The words police, fear, danger, kill, torture aren’t new. I learnt them the day I started understanding words. In fact these are the only words I speak frequently. Call it my, no, call it our ‘paranormal’, if not a ‘new normal’.

With these thoughts, I sit petrified on the floor of my room. So are the people at my house.

Father and I want to confirm that everybody is fine. We are handicapped. We are helpless. The mobile connectivity has been snapped. We are back to the medieval era tonight and the entire valley has become a battlefield.

“The military has destroyed everything outside, from cars to houses,” says uncle. “I think they have gone mad, and may go for the worst.”

I hastily snoop through the window in a dark room to avoid giving the forces outside any clue that I am watching them. I see guns hanging around their shoulders and truncheons in their hand. They are scrutinising every movement of the inhabitants of my mohalla (neighbourhood). The resentment on their face reveals all the hate they have for us. The situation outside is formidable.

But the long awaited dawn finally comes. With the light, comes the realisation, we survived, just for another day, perhaps.

It’s Saturday. Curfew has been imposed by the Indian state. No one is allowed to venture out. With my cousin, I step out through an alternate way to access the situation. Padded up with their black armour, hostile soldiers are everywhere, cradling guns, wearing long camouflage coats, ragged green helmets and jackboots.

“That’s an alien army,” I talk to myself. “They are here for human blood.”

As our eyes reach the other end, we see a battle in the making, with mourners on one end and Indian troops on the other.

We fear to go near. We fear to be shot, to be beaten, to be abused, to be humiliated in our own land. The fear keeps us away. We also know the consequences of joining a peaceful protest would mean the same treatment as for the stone throwing youth or militant. We may suffer a brutal treatment from the aliens with impunity.

We are back home, only to be greeted with the news,

(Five boys have been shot dead).

The situation is becoming more tense. Pro-Burhan Wani protests are gripping the valley. On the streets, the ambulance siren shatters the uneasy calm every now and then. Everybody around me is crying, lamenting the demise of mourners.

“My God protect all of them,” uncle prays, “and not let their blood go in waste!”

Sheikh Saqib is a student studying in Hr Secondary school.