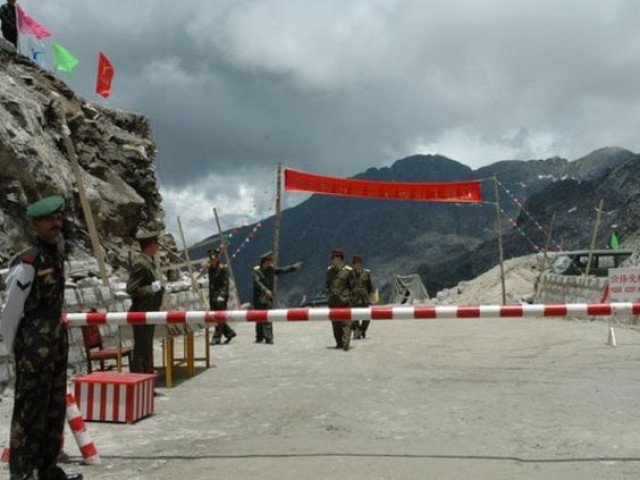 China and India fought a brief war over their disputed Himalayan borders in 1962. PHOTO: BBC

Earlier last month, the Indian military showed up in the Dokalam region to stop the Chinese from building a road. This area falls under the Bhutan tri-junction which is a sliver of land where China, India and Bhutan meet.

The incident came into light when some Indian pilgrims, on their way to Tibet, were sent back to the border. Since then, both countries have been providing their own version of the same tale.

The eastern border of India with China is governed by an 1890 agreement brokered by the British. It has been fairly uneventful since then, except for the 1962 border skirmish between the two nations. Since the incident with the pilgrims, India and China have been ready to go at each other. While India maintains that it is acting on behalf of Bhutan, China accuses India of ‘ulterior motives’ and claims this territory as its own.

These events are happening against the backdrop of the Brazil, Russia, India, China and South Africa (BRICS) Summit currently underway. This forum consists of the fastest growing economies in the world. What’s awkward though is that China and India are major participants in this forum.

Even as the Sikkim standoff heats up, President Xi Jinping and Prime Minister (PM) Narendra Modi praised each other and stated their resolve in combating terrorism. Both of them avoided any mention of Dokalam, which to be honest, is quite an interesting move.

From an outsider’s viewpoint, there are indeed some questions that need to be answered when it comes to both these nations.

While China is the big man on campus in the region, for the most part, its efforts have revolved around building its own economy. Unlike western powers, the Chinese are not in it to build empires. Even for something like the China-Pakistan Economic Corridor (CPEC), which seems like a takeover of Pakistan, the eventual goal is to transport goods to and from the Arabian Sea to China. Pakistan benefiting along the way is merely a bonus. If China was building a road in the Dokalam region, it may have been to provide better trade facilities.

Why the Bhutanese government felt threatened all of a sudden and why they didn’t take up the matter diplomatically is somewhat strange. The Indian media leads us to believe that China is a bully and gets its way by stepping over other countries in the region, yet that still does not explain why India chose to enter into a military standoff with China.

For starters, India fears that China may have designs to encroach over the region and gain more territorial control. That’s quite possible, but what motive does China have for doing so?

If you take a look at the Bhutan tri-Junction map, it is a tiny piece of land when compared to China. Even if China were to give the area any strategic importance, it would be justified given that PM Modi just bought American maritime drones to spy on China in the Indian Ocean. No harm in countering the Indian paranoia.

Another angle an Indian blog brought up was that India did what it did to show China that it was not the only might in the region. A noble act, albeit a foolish one. When I was in grad school in the US some years ago, I had an Indian  professor who took his marketing strategy class on a student trip to China. When he came back, I asked him,

“How was China? Was it similar to India?”

“Nowhere close. India is still at least 50 years behind China.”

While the professor meant this statement in terms of infrastructure and economy, the same goes for the military advancement as well.

Lastly, India has placed itself in a precarious position. If it withdraws its forces now, it would be succumbing to Chinese demands. Based on this, anytime a military skirmish or diplomatic row takes place with China, it will have to back off. It would also mean that China has superiority in the Doklam region and whether it was their original intention or not, China can just walk over and plant the Chinese flag in the region.

The Indian Army Chief, General Bipin Rawat, perhaps in a move showing bravado, had stated that India was ready for a ‘two-and-a-half front war’. The ‘two’ here being China and Pakistan and ‘half’ indicating internal conflicts. The paranoia against Pakistan rears its ugly head here again evident through the fact that India has to drag in Pakistan into every conflict that it has going on. If the general had kept up with global trends and history, even going back past 20 years or so, he may not have made such a brash statement.

India is witnessing a great business streak in their Information Technology (IT) industry. They have not only established themselves as leaders in the IT outsourcing industry, but are also on their way to becoming a manufacturer for American F-16 jets. The New York Times columnist Thomas Freidman famously presented the ‘Golden Arches Theory’ in his seminal work The Lexus and the Olive Tree.

According to this theory, no two countries that have a McDonalds chain will ever go to war with each other. Mr Friedman was of the view that any country with a McDonalds franchise had to have a stable and integrated economy, and it going to war would be detrimental to their economic well-being.

Finally, India is stuck in this position all by itself. Both the US and Russia will want to remain neutral in this scenario as none of them want to poke China. Ironically, the only country that can realistically help them out of this jam is Pakistan. Otherwise, India must withdraw its forces from the region and suffer all the consequences that come with it.