After 70 years, India and Israel’s longing bromance is finally out of the closet 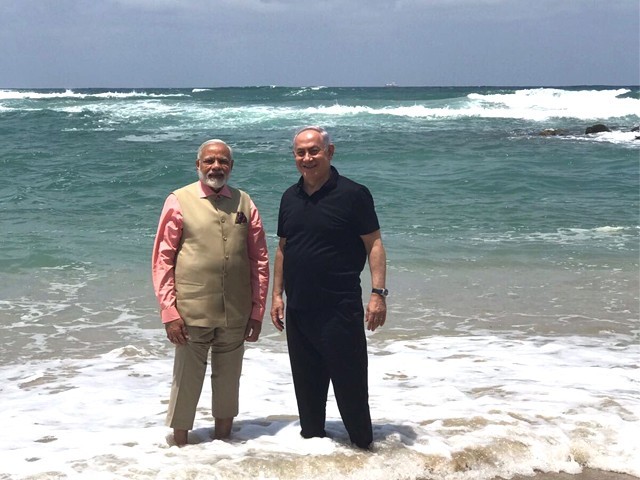 It took a long time coming, 70 years to be precise, but perhaps it was inevitable. In the nearly seven decades, since the state of Israel came into existence, no Indian prime minister set foot in the country.

But true to the unorthodox style that is revitalising Indian diplomacy, Prime Minister Narendra Modi finally corrected this longstanding anomaly with his trip to Israel this week.

The extraordinarily warm welcome Modi received illustrates how much his hosts wanted this visit to happen and how much it matters to them. Prime Minister Benjamin Netanyahu was effusive in his welcome address, using a few Hindi words and liberally sprinkling catchy acronyms, much like Modi does in his speeches.

It was an honor to host you, @narendramodi. Israel & India are thousands of kilometers apart, but our people are now closer than ever. 🇮🇱🇮🇳 pic.twitter.com/PxXbWbiaDx

Thank you my friend, PM @netanyahu for the signed photo, your kind words, amazing hospitality & passion towards #IndiaIsraelFriendship. pic.twitter.com/1jUtMG3F85

Over the last 25 years, the relationship with Israel has emerged as one of the most important bilateral relationships for India, especially in the critical areas of security, water management and agriculture. The progress that Israel has made in these fields over the years has been admirable and India stands to learn a lot from the Israeli experience. Israel has also been a reliable supplier and has stepped in to provide key technologies and armaments during times of crisis, including during the Kargil conflict in 1999.

From the Israeli perspective, a strong partnership with a large country is invaluable. It is isolated in its neighbourhood and many countries walk a veritable tightrope when it comes to balancing their relationships with Israel and the influential Arab world. The full-fledged endorsement and support of India, a like-minded liberal democracy, becomes a source of great strength and legitimacy for Israel.

Furthermore, Israel needs economic partners to fuel its own growth and a massive market, for instance, India can absorb a lot of Israeli products and technologies, providing just the boost Israeli industry needs.

In addition, amidst the clear practical advantages of the relationship between these two countries, there are deep historical links as well. India’s shores have been a safe haven for Jews for centuries and they have had the freedom to practice and preserve their faith without facing the anti-Semitism that has followed the community everywhere else in the world.

Yet, despite all these obvious synergies, the two countries have largely kept their relationship very low key due to two major factors. First is the reluctance of generations of Indian politicians to antagonise its substantial Muslim population that plays a major role in influencing electoral outcomes in the country.

Secondly, India has been a little too conscious of Arab sensitivities and has chosen to bend over backwards to avoid offending them. These were indeed the underpinnings of the Nehruvian ideology that guided independent India’s worldview.

Starting with PV Narasimha Rao in 1991, India has gradually started adopting a more pragmatic approach in its diplomacy, and it was under him that India finally established formal diplomatic relations with Israel in 1992, by which time several Arab nations themselves had established ties with Israel. Even then, India kept its relationship with Israel largely confined to the closet. There was a lot of cooperation, but with little fanfare.

PM Modi has articulated a significant departure from Nehruvian coyness in several matters, and his trip to Israel makes a strong statement about the direction he intends to steer India towards.

India is committed to the two-state formula and recognises the legitimacy of Israel as the home for Jewish people and a separate Palestine. It is also strengthening its relationship with key Muslim countries like the UAE and Iran on a more assured footing. Its growing economic strength and geopolitical importance allows it that space, which was earlier constrained by its dependence on oil imports for its energy needs and the large number of Indians who live and work in the region.

In a lot of ways, India and Israel are natural partners, and with its rapidly growing global profile, India can pursue this relationship more openly. The two countries face many similar challenges and the solutions that Israel has developed for addressing those challenges can be applicable for India as well.

Large parts of India are arid and agriculture is heavily dependent on erratic rains. Israel has pioneered several irrigation technologies that can help Indian farmers overcome this dependence. Similarly, Israeli companies have developed cutting edge technology in the field of IT and there is tremendous scope for joint Research and Development. The $40 million innovation fund that was announced during the visit is a reflection of the potential that exists in this sphere.

Security is another key area where the two countries will continue to expand their cooperation. In addition to weapons and related technology, there is a strong focus on counter-terrorism. Both India and Israel have been firmly in the crosshairs of Islamic terrorists and closer cooperation between the two can greatly strengthen their security architecture.

For India, decoupling its Israel ties with the deep relationship it has with the Arab world will be a major accomplishment and a mark of its maturing and self-assured diplomacy.

Both countries have emerged from a tumultuous past and still face severe existential threats in their neighbourhoods. Yet, despite being under siege, they have not just survived but have flourished while retaining their unique cultural essence in an environment of animosity and suspicion in their respective neighbourhoods.

Ultimately, as much as India and Israel need each other, the world also needs these two multicultural and inclusive countries to thrive. Indeed, the world will stand to benefit from the lessons these two have learnt in their own journeys.