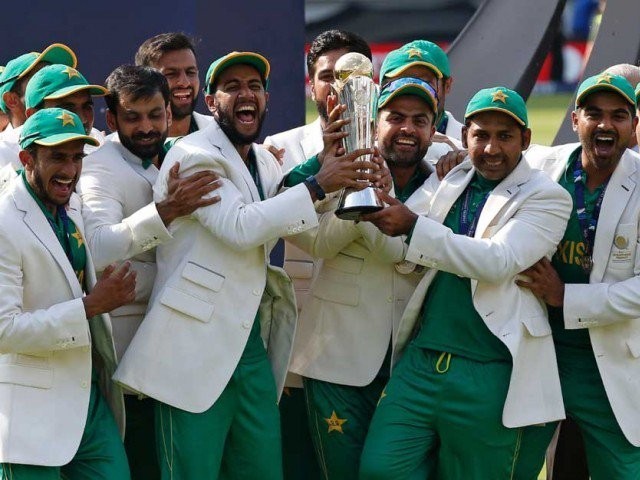 A fairy-tale script, against all the odds, which forced one to believe in the sporting Gods. PHOTO: AFP

An ode to champions, led by Sarfraz,
Laid rest to the ghosts of Wasim’s past.

Touted as underdogs, destined to fail,
Emerged as cornered tigers, which the world came to hail.

Battered and bruised, against archest of rivals,
They pulled off cricket’s most stunning revival.

The wit of Imad, the guile of Hassan,
Saw them past the opposition ranked number one.

Nostalgia, followed by out-pacing Sri Lanka,
Do spare a thought for unlucky Malinga.

Up against England, the favourites by far,
Who dared to bowl short to Fakhar Zaman.

Steered by Hassan’s middle overs mayhem,
The hosts were schooled, like boys against men.

Three in a row, meant a place in the final,
A clash against India, to complete the spiral.

A pint of momentum, with nothing lose,
A chance to make history, to end the hoodoo.

A fortunate escape in the early stages,
Gave birth to a centurion, for all the ages.

A mountain to climb, caught Kohli’s attention,
As Amir seized his shot at redemption.

Brimming with confidence, much like a flame,
Shadab Khan folks, remember the name.

The wickets tumbled, the crowd roared,
The pundits were shocked, as the green flag soared.

A fairy tale script, against all the odds,
Which forced one to believe in the sporting Gods.

Clad in white coats, a young team in command,
Who else could have done it, if not Pakistan?