When the pot met the kettle: How Modi made India a lackey to the US 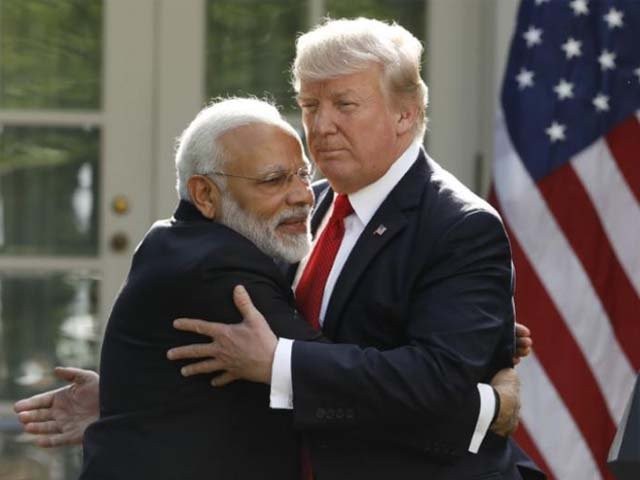 India's Prime Minister Narendra Modi hugs President Trump as they give joint statements in the Rose Garden of the White House. PHOTO: REUTERS

Finally, the pot and the kettle met, shook hands and hugged each other. Analysts world over are still debating possible gains and losses of a meeting between two unique characters of world politics today – Donald Trump and Narendra Modi.

They represent two very vibrant democracies of the world but they are not recognised as the real faces of their multi-cultural nations. They are treated more as aberrations of history, a mistake of time rather than a true face of the era and people they got their mandate from.

They both defy the norms of Greek and Shakespearean tragedy. Their past sins and acts are not holding them back from achieving success; they are challenging goodness at every stage and are still getting away with it. They survive by selling their villainy. Poetic justice does not visit them.

Therefore, the individuals who are defined more by their negativity – the pot and the kettle – would receive more than the usual attention. They received this attention recently in Washington when Modi met his own image. Majority of the analysts in India kept the focus on the outcome of the talks and what headway the two democracies could make on the bilateral front.

India sees a major gain in the US’s decision to declare the Pakistan-based Hizbul Mujahideen chief, Syed Salahuddin, as a “global terrorist”. One needs to ask how such a declaration alters the ground realities in South Asia, how will it improve the relationship between New Delhi and Islamabad, and how will it solve the Kashmir issue? Domestic analysts in India don’t want to debate over how Washington is indirectly interfering in the bilateral relationship between the two South Asian neighbours.

The hard truth of the meeting was the decision to go in for a comprehensive review of trade relations between the two countries. Currently, the balance of trade is in India’s favour and the review will, in fact, put great pressure on India to open its market for American goods, which will not be easy. The businessman president of the US believes more in transactional relations than emotional bonding.

New Delhi is already a strategic partner of the US in South Asia and Modi is willing to play Washington’s game in the region. The overwhelming argument in India is that Modi’s embrace of the US, at the cost of its foreign policy autonomy, is the best thing to happen to India in the last 70 years. This narrative dominates popular discourse so much that there is hardly any space for questioning such an abject surrender of our strategic autonomy.

Our previous Prime Minister Dr Manmohan Singh signed a nuclear deal with the US and exalted India’s position as a strategic partner of Washington without surrendering the strategic autonomy despite continuous pressure from the US.

Modi, who won a historic mandate, made India a lackey to the US foreign policy.

The repercussion is for all to see. China, an inalienable neighbour, sees the entente between the two largest democracies as an attempt to contain its growing ambition. Pakistan, despite its inhibitions, has openly aligned with Beijing and become an important part of the One Belt and One Road (OBOR) policy. Bhutan, which has survived so far under India’s sphere of influence, wants to have its own say in dealing with foreign countries. India’s relationship with Islamabad is at an all-time low and the strategic bonding between New Delhi and Washington has made South Asia more fragile than before.

At a time when the US’s allies, like Germany and France, are talking about charting their own course in history, New Delhi’s bond with the US is anachronistic. It is investing in a leader which the developed West wants to keep at an arm’s length.

Compare the body language of Angela Merkel and Emmanuel Macron towards Trump with Modi’s. You will realise how narrow the mental canvas of the Indian leader is. German and French leaders rejected Trump’s hatred towards Muslims; they refused to endorse the American president’s political insularity.

Modi can’t do that because he is the mirror image of Trump in many ways. They both share a common hatred towards minorities, they abhor questioning and democratic dissent, and they are votaries of narrow nationalism. Moreover, they represent the political ethos of exclusion and nurture a deep hatred towards the media.

At a time when the world is passing through an extremely difficult phase of history, the leaders of the two biggest democracies are highly divisive figures. They can’t talk of leading the world out of the present chaos; they, ironically, represent chaos. The world cannot look towards them for leadership at all.

Immediately after independence, India became the voice of developing countries when the world was passing through a new wave of uncertainties. This happened because of the leadership of India’s first Prime Minister Jawaharlal Nehru. Today, India’s leadership is under a man who stands for divisiveness and Hindu extremism and it cannot be a voice at the international fora. The same applies to Trump.

The irony is that the US-India comraderies cannot stabilise the world, it cannot play a positive role in calming down the domestic and international chaos. It cannot act as a moral force in bringing sanity in South Asia.