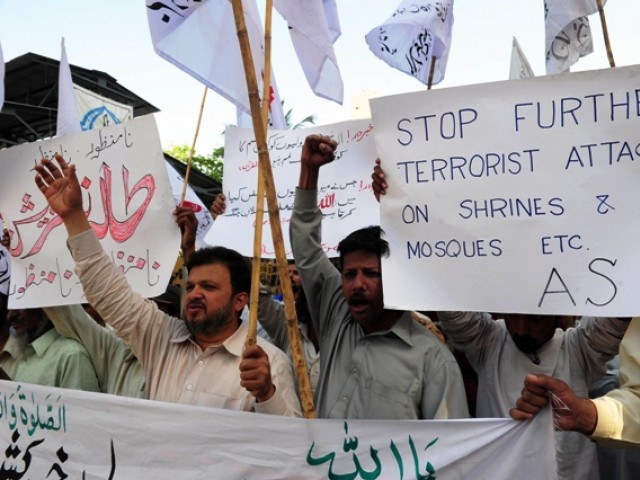 Sunni Muslims shout slogans during a protest in Karachi against the suicide bomb attacks on a shrine in Dera Ghazi Khan district. PHOTO: AFP

Self-destructing suicide bombers who kill innocent people show that they are against the Islamic ideology of saving humanity from self-destruction.

The Taliban (including Wahabis, Salafis and all Muslims who kill other Muslims) cast a shadow on their status as Muslims.

The classical scholar Hasan alBasri calls Muslims who kill other Muslims “the grave sinners”, whereas Wasil ibn Ata called such Muslims neither “believers” nor “non-believers”. Ironically, the predecessor of all the literalists declared them “kafirs” (non-believers).

The suicide bombers of the shrine of Syed Ahmad Sakhi Sarwar will be considered kafirs by the literalists – paradoxically the same group they committed this wicked act for.

Pakistani Taliban claimed responsibility for all the attacks on sufi shrines in Pakistan that have taken place in the last 18 months and killed hundreds of people.

Literalists like Wahabis are well known for their enmity against sufis and shias. Their acts of violence are not sufficiently condemned by masses to elicit total rejection of their ideology.

Wahabi-ism portrays Islam as a universal, abstract, homogenous and changeless faith; a faith having only one literal interpretation without any historic context.

The west has also constructed Islam as a Unitarian, abstract, homogenous and changeless faith having only one literal interpretation without any historic context.

Muslim authoritarian regimes have also enforced or attempted to enforce and project a similar view of Islam and Muslims, overlooking diversity to oppress its people and harass them from demanding human rights enshrined in the UN charter.

Edward Said and Talal Asad have shown how the west has constructed Muslims devoid of sectarian, cultural, ethnic, historic and geo-political diversity “to make that (Islamic) world vulnerable to military aggression”.

Edward Said also condemned the practice of the Arab elite who internalised the US and British orientalists’ ideas of Arabic culture. (Edward W Said, Islam Through Western Eyes, The Nation)

The spread of fundamentalism and extremism emerged after colonialism with the support of the west to guard against communism.

The war in Afghanistan helped Saudi Arabia to spread its Wahabi ideology all around the poor Muslim nations including Afghanistan, Pakistan, Bangladesh, and Indonesia.

One kind of Islam?

Wahabis built the image of Islam with $100 billion over decades, erasing all other representations of Muslim communities.

After 9/11, representations of all Muslims as fundamentalist became dominant in the west. Although 15 out of 19 hijackers were Arabs and alQaeda’s leadership is also Arab, the west did not acknowledge this attack coming from a puritan Wahabi sect of Saudi Arabia alone. Instead, they construed this attack as one coming from the entire Muslim community.

Wahabis succeeded in painting all Muslims as themselves, expunging the 98 per cent of the rest of Muslims and dominating the narrative of Muslim community.

Such representation and construction of Islam and Muslims is highly problematic as it fails to include the majority of Muslims belonging to diverse races, nationalities, ethnicities, and sects. Salafis and Wahabis constitute less than a few per cent of total the Muslim population and for this reason, they cannot represent Muslim majority.

Salafis and Wahabis completely reject shiism and Sufism, discarding a sizeable majority of Muslims from the fold of Islam.

Muslim countries display diversity in their political and constitutional situations. For example, Turkey is a completely secular state that implements only man made rules in their country, whereas Pakistan is an Islamic republic but has a man made constitution and does not enforce Sharia code in society. Saudi Arabia and Iran are Islamic states with their specific brand of Sharia implemented in their countries. Sharia is also understood and applied differently by Muslim communities belonging to numerous sects.

Salafi and Wahabi construction of Islam and Muslims do not account for the Muslim majority who remain silent and erased from the collective consciousness of the west and the rest. Violent attacks on innocent Pakistani citizens are on the rise. Media analyst Malik Rashid writes:

This spring and summer we will see more savage acts as terrorists are pressured in their hometowns by Afghan-Pakistan border. They are trying to incite popular unrest using book burning by Pastor Jones while fleeing cowardly, leaving their trapped and fallen comrades behind.

We need to condemn literalists in the strongest terms possible. We should send them a clear message that they will only be considered a part of the 1.57 billion diverse Muslim community if they learn to live with the 98 per cent of non-literalist Muslims.