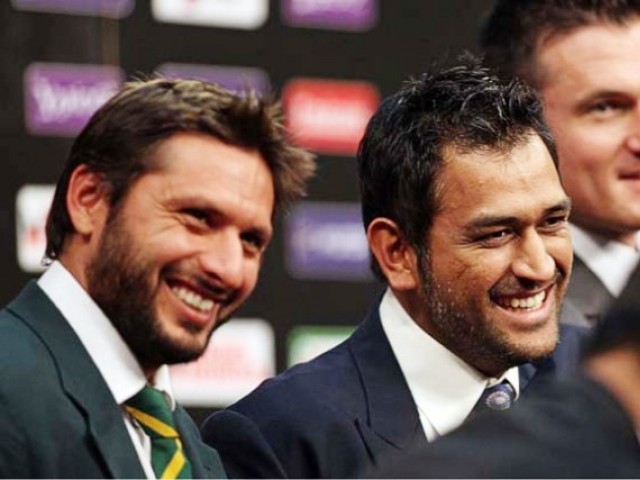 I’ve never been Afridi’s biggest fan. But his recent form with the ball, and his leadership in the World Cup changed my mind…well, sort of.

I have always found him to be mercurial. From scoring a hundred in 30-40 balls to getting out after playing the most atrocious shot in the books, Afridi has even bitten into a cricket ball. A day after his return to Pakistan, he held a brief press conference on his front porch.

Lala fired back to a question asked by one of the reporters regarding Pakistan’s defeat against India. He questioned why Pakistanis look towards India with jaundiced eyes; why we dislike India while Indian movies, TV sitcoms and channels are watched avidly in Pakistani homes; why we follow Indian traditions at weddings but can’t bear to see them win a cricket match. I was impressed by the maturity Afridi showed in that press conference, as he took on the role of a peace ambassador between the two countries.

His words must have been a moment of self reflection for many Pakistanis. He had won many hearts in Pakistan and India after his performance during the tournament and was continuing to do so after.

In another interview, Afridi delivered the proverbial doosra. When asked about the kindness and hospitality of Indians in Mohali, he exclaimed that our “Pakistani and Muslim hearts” are much bigger than those of our neighbours to the East.  He may have speaking candidly, but he offended people around the world by saying Muslims and Pakistanis have cleaner intentions than others.

He said Pakistanis cannot sustain a healthy relationship with India, laying the blame on a third country (most likely America). According to him, this third country will never let Pakistan and India enjoy a harmonious relationship.  Just for good measure, he blasted the Indian media for having a negative attitude towards Pakistan and being an obstacle in the way of improving Indo-Pak relations.

Thus, Afridi went from questioning bigotry to championing it in a matter of hours.

Given his erratic nature, there are no surprises here. I wouldn’t be surprised if he regrets the things he said, before changing his mind again. With Afridi, you just never know what to expect next.

Such is the wiring in Afridi’s mind. He must choose his words carefully.

As an ambassador for Pakistan it is important that he continues efforts to promote a peaceful relationship with all our neighbours. By claiming that Muslims and Pakistanis have cleaner hearts, he is deeply offending people from other nations and religions.

Perhaps he was reacting to the comments made by Indian batsman Gautam Gambhir who said he was sure that the win over Pakistan helped victims of the 26/11 Mumbai attack.

Does Gambhir’s statement indicate that that he thought he was playing against Kasab XI in Mohali? Does beating Pakistan in a cricket match avenge the bloodshed in Mumbai or defeat terrorism? What about all the innocent Pakistanis who have died from terrorism, Gautam?  One can only wonder why a technically gifted batsman like Gambhir would play such a loose shot.

With sweeping statements like these by super stars from both India and Pakistan, we cannot move away from the rhetoric of the past 60 years.

Salman Ahmad of Junoon fame recently said that if there’s ever a chance of Indo Pak peace, it is in this decade, as 60 per cent (750 million) Indians and Pakistanis are under the age of 20.  This is a clear message that the young are capable of influencing a change for peace.

And who influences the youth the most? Cricketers have always been idols for young Pakistanis and Indians, and if they continue to make such ill-advised statements, we can’t bridge the gap of insecurity and trust.