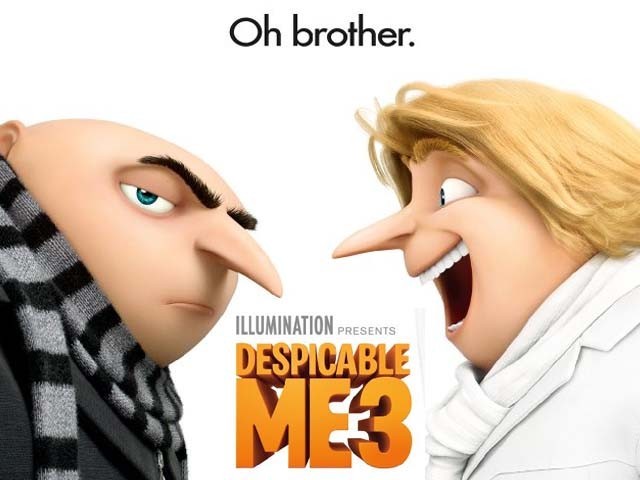 The problem with Despicable Me 3 is that it’s just too overstuffed. PHOTO: IMDb

Despicable Me 3 is the latest entry in the hugely successful Despicable Me franchise. And although the last two prequels have done well in regards to delivering good humour, fun characters and enjoyable set-pieces, the latest release falls short of being even slightly good.

The latest film follows the now-reformed Gru (Steve Carell), who still works for the Anti-Villain League. His failure to apprehend the new baddie, Balthazar Brat (voiced by South Park’s Trey Parker) – a child star from the 80s who is seeking world domination because of the pre-mature cancellation of his show – leads to him being fired from the Anti-Villain league. Furthermore, it pushes Gru to the brink of a major identity crisis.

However, Gru finds himself at odds with his moral compass when he discovers that he has a twin brother Dru (also voiced by Carell). Dru was separated from him at birth and happens to be a super villain living in the fictional Eastern European country of Freedonia.

From the onset, it’s obvious that Despicable Me 3 is here to have fun, as evidenced by the entertaining opening set-piece. And with the success this franchise has achieved with its previous prequels, it’s apparent that the recent offering isn’t afraid to take the story in a new direction. This may be because it has an extremely loyal fan-base in the form of young children, who will not be too affected if the film sacrifices character beats for a few more laughs and set-pieces.

And if you are a child, you’ll probably have a lot of fun with this, just like you’ve had with the previous films. But if you’re a parent or even an adult moviegoer, you will be a little deterred by the distinct lack of emotion, which is otherwise present in this franchise.

The problem with Despicable Me 3 is that it’s just too overstuffed. It’s crammed with four to five sub-plots, when there isn’t even room for more than two. The film moves at a brisk pace, but it lacks structure and doesn’t focus enough on the characters. At certain points, it just feels as if the producer ran out of ideas, whether it be with the hit or miss gags or the direction of certain sub-plots.

An example of this is our antagonist. Initially, Balthazar feels like an extremely interesting and hilarious addition to the film as he break-dances to 80s hits while comfortably stealing a diamond. But over the course of the film, it seems as if the filmmakers just ran out of things for him to do and keep throwing the same recycled jokes.

The twin-brother story-line also feels like a major missed opportunity because while there’s potential for filmmakers to explore some mature themes there, they seem content at simply making jokes. And each confrontation between Gru and his brother quickly grows tiresome and predictable.

Credit to Carrell though, as he does a fantastic job yet again reprising his role as Gru and is still the funniest part of the movie. But he struggles to make an interesting character out of Dru, who grows increasingly annoying and uninteresting as the movie progresses.

That said, there are still a number of things about Despicable Me 3 that do work well. The central adventure, for instance, is quite entertaining and has enough in it to grab your attention with its exuberant set-pieces. The humour mostly works as well and some of the quips are genuinely funny. And despite the lack of attention to its characters, the movie still manages to focus a fair bit on the family dynamic of Gru, his wife and his adopted daughters, which provide the film with a few tender moments.

As for the Minions, they are in the film enough for them to have their own little story. But it seems the filmmakers have learned their lesson from the Minions movie – they work best in a supporting capacity.

Ultimately, Despicable Me 3 feels prosaic and is fairly innocuous, but again, these words will only affect those who are old enough to know what they actually mean.

The lack of emotion fails to elevate the film from a cartoon to an animated film. And while there’s no denying that there’s a lot of good, lighthearted fun to be had, you shouldn’t expect anything more.