The Bahawalpur inferno victims were not reckless jahils, but simply desperate citizens of Pakistan 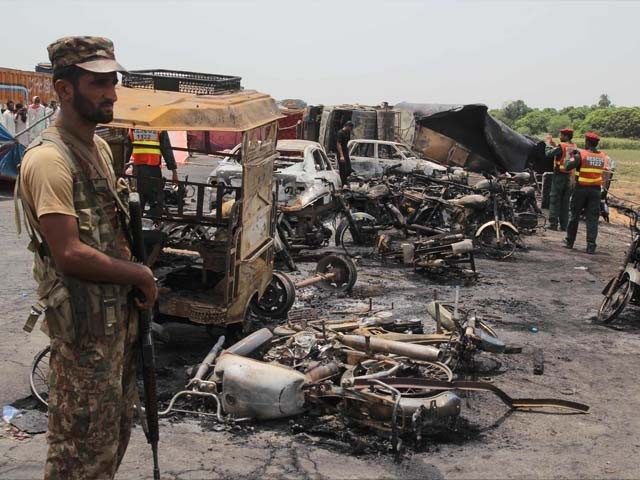 Pakistani soldiers stand guard beside burnt out vehicles at the scene where an oil tanker caught fire following an accident on a highway near the town of Ahmedpur East, some 670 kms (416 miles) from Islamabad on June 25, 2017. At least 123 people were killed and scores injured in an inferno that erupted after an oil tanker overturned in central Pakistan early on June 25 and crowds rushed to collect fuel, an official said. PHOTO: AFP / SS MIRZA

The aftermath of disaster is often pervaded by catharsis, and as human nature would always have it, the pressing propensity to find appropriate scapegoats and pass the blame.

As I write this merely days after the heinous tragedy of the oil spill on KLP road, it is instantly plain that those who perished in the incident are the ones being held unanimously responsible for the same.

Because even as an oil tanker carrying 40,000 litres of fuel overturned whilst making a sharp turn on Sunday morning, it did not immediately unleash the inferno that followed. First, the inhabitants of the nearby village of Ramzanpur Joya caught news that the tanker had fallen prey to a bend on the contiguous highway and an unguarded stream of highly priced oil now flowed within a stone’s throw of their hamlet.

They hurried, and soon, around a 100 eager villagers had gathered to claim their share of the spoils. Not to be left behind at any cost, they were joined by a contingent of motorcycle riders also present at the scene.

Officially, the cause of the fire is so far unknown, with an Oil and Gas Regulatory Authority (OGRA) enquiry currently pending an outcome. Independent experts are meanwhile placing culpability on the transport company for the vehicle not conforming to safety regulations. The eventual report may well pinpoint the cause of the initial crash or the following spill, but the actual fire seems to have been stoked by one of the hoarders or many passive observers gathered around the scene simply deciding to light a cigarette, and in doing so, releasing the furious flames that engulfed all.

Almost all the ensuing casualties, which now stand at 174 people, happened to be the overzealous locals attempting to siphon as much oil into their containers as time, space and availability would permit. In the days since, their presence on the scene has been held responsible for their own demise.

(They were stealing oil)

(Didn’t they know that it could catch fire?)

On the surface, these may seem like a few isolated responses of some callous individuals that I’ve had the displeasure of coming across or reading of in the past few days. But dig deeper, peruse the rationale, quantify the number of near identical reactions you’ve read or heard, and you will find this isn’t just a few individuals; this is the prevailing zeitgeist of a cold and inimical society that has mastered the art of victim blaming, and pounces on every given opportunity to showcase its skills.

This time around, the job has been made significantly easier. The victims are dead. The dead cannot speak. They cannot rebut the self-righteous contempt of the bourgeoisie, their vicious ignorance.

They cannot tell you that they were not reckless, but simply desperate. They cannot countenance the fact that yes, they are jahil, but ask in the same breath, who is responsible for their jahalat? They are unable to tell you that they knew, or at least most of them, the dangers prevalent at the time of the spill, but their poverty rendered the lure of the oil as some sort of mythical treasure, worth putting themselves at risk for.

Finally, they would have told you that they are indeed greedy, greedier than most of those spewing disdain from their well-endowed drawing rooms could possibly fathom, but their greed is congenital and inescapable; when you are born with nothing, you will do anything for something.

Or would it have mattered anyhow, were they yet alive to say these things? Isn’t that the point? That they do not have a voice? Dead or alive, they are deaf and dumb. Their voices, whether contained in whispers or aggrandised to unbridled screams, remain helplessly inaudible to the powers of corridors, the influential echelons of society that follow, and the proverbially silent and educated middle-class below them.

Today, I still vividly remember some of the most disturbing anecdotes of human desperation that were narrated over dining tables or societal gatherings in the wake of the 2005 earthquake in northern Pakistan. Men were said to be stripping corpses for expensive items of jewellery and raiding the rubble for any valuables they could find to sell.

As a young boy, I naturally found myself unable to fathom what could possibly incubate such monstrosity. Unfortunately, the adults around me were equally hapless at it. They were proficient in conveying their disgust and passing judgments, but unable to comprehend, or perhaps acknowledge, what drives men to such extremes. They convinced themselves that such ignominious delinquency simply occurred within dynamics of immorality and professional crime, with no tangible link with the epidemics of poverty and class divide.

It is because accepting the exposition of these acts being fuelled by deprivation and impoverishment is inherently pernicious to our flimsy conscience. It paints us in a bad light, having abrogated our responsibilities towards society and being complacent about the problems within. It remains easier to deny, as countenance does not fit our narrative of selfish indifference and inaction.

We like to treat politics as a matter of sport or a soap opera, discussing it casually over our dining tables and air-conditioned drawing rooms, refusing to treat it as a palpable paradigm, requiring our active participation. Activism has become an ossified and old-fashioned occupation. Social work is limitedly indulged in as a means of self-aggrandisement and buttressing one’s flatulent boasting.

This lifestyle is facilitated by denying the true origins of the events that unfolded after the oil spill on Sunday morning, the fall out of the 2005 earthquake, and many incidents since the genesis of our country where the fight for survival has driven men and women to do unspeakable things.

It is this lethargy on part of the educated middle class that allows our plutocratic elite to operate with political immunity as they go about consolidating their wealth and precluding any hope or opportunity to the underclass, which is too weak and subordinated to have a voice of its own.

Today, instead of cruelly holding the bereaved responsible for their wretched fate, we ought to hang our heads in collective shame, for it is our acquiescence to the archaic and oppressive structure of society that drove the inhabitants of Ramzanpur Joya to the edge. And if we don’t have the spine to accept responsibility, if that is too much to ask, then let us at least show compassion and remain silent, instead of vilifying the departed.