Society is no longer women’s worst enemy – other women are 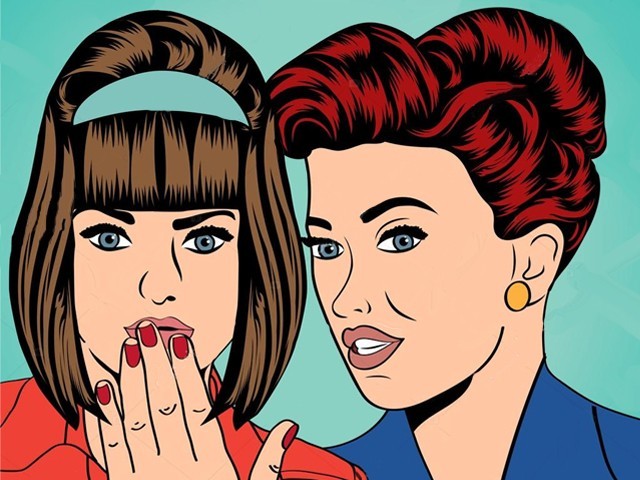 I promise you, you don’t need to comment on what that girl’s wearing or who she hangs out with. PHOTO: DEPOSIT PHOTOS

I know that there is a plethora of worthy issues in Pakistan right now to write about, but this particular one has a special place in my heart. I was fortunate enough to grow up in a family that loved and nurtured me, and was able to give me everything I’ve ever asked for and more.

At a fundamental level, I have nothing to complain about, and neither do most of my friends. We live in our own bubble of top of the list universities, expensive restaurants and excessive social media posts. We consider ourselves to be progressive, modern and ‘with the times’. Which is why it can be unsettling when an older member of our progressive, modern family comments on the shape of our nose at the dinner table out of nowhere.

Somehow, in the midst of all of our efforts towards empowerment and independence, it is still okay in our society for women to shame other women. Perhaps this is because in the households we grew up in, shaming has become normalised. The first form of shaming we are exposed to, unfortunately, comes from women we love and respect – the women who raise us. Our parents, grandparents, and all the chatty aunties of our society are where the problem originated (but definitely not where it ends).

They are from a different time, a time when your public appearance was directly related to your value as a human being. You were told that nobody would want to marry you if you didn’t dress a certain way or behave a certain way. Nobody would give you a job if you weren’t docile, or if you couldn’t shake off that one high school rumour about you that now the whole society seems to know and believe. And so for older generations, the appearance of themselves that they put forward in society has come to be the be all and end all of their lives.

The crux of the problem now, though, is that so many girls and women from our own generation are starting to adopt and internalise these archaic values, and are imposing them on each other. Girls, we don’t have to be our parents. There are already so many obstacles in the paths of young women trying to make lives for themselves, especially in a country like ours, and really the last thing we need is to be shaming, judging and humiliating each other.

My problem isn’t even with people being rude and commenting on things they shouldn’t be commenting on. There will always be people in our lives who will do that. My problem is that the mind-set one needs to have at a fundamental level in order to be so hateful is a poisonous and dangerous mind-set indeed. It is the same mind-set our parents and grandparents grew up with, and it is the same mind-set that it has become our duty to eliminate. In different words, my problem isn’t if someone calls me fat. My problem is the fact that my weight and appearance is even a valid point of interest to them.

Our standards of beauty are extremely messed up. The way someone looks should be the least of your worries. Why don’t you base their beauty off of the things they say, their intellectual capacity, how interesting they are, what they do to better the world around them? I spent way too many years of my life wearing oversized t-shirts to pool parties and crying in front of the mirror because I’d tried on everything in my closet and, at least in my eyes, nothing looked good. And that’s the worst part of the problem, even when we don’t actively participate in promoting these values, we still end up internalising them. We let them define us and make us feel self-conscious.

It is almost as if the sole purpose of our lives is to show our society what it wants to see – a shy, obedient girl who is seen but not heard, who continues to respectfully nod at people who belittle her, who does not and cannot defend herself, who, at this point, has been convinced that she isn’t good enough. At that point, society is no longer our worst enemy – we are.

If I’m being honest, there were times in my life when I was certain that there was nobody who could possibly hate me more than I hated myself. And that kind of self-loathing is the perfect breeding ground for modern-day, millennial replicas of the aunties whom we have come to despise. We grow up hearing that we need to lose weight, stay out of the sun so as not to tan our skin, keep our mouths shut even when we are extremely offended by something someone says, because God forbid we offend them.

After marinating in that toxic environment, we go out into the world and immediately start imposing these same pernicious values on other girls and women, because if we had to deal with it, everyone should. Now, when we see our friends after some time, whether we say it out loud or not, the first things we notice include changes in their weight and skin tone, because those were always the first things aunties would comment on when they saw us at weddings.

To those girls who have been made to feel like they aren’t perfect the way they are: I know we aren’t supposed to question our elders, and we’re expected to silently accept their values, but I assure you that it is okay to disagree with them; they aren’t always right and they’re just human. You do not have to compromise even an atom of your physical being for anyone or anything, ever, in your life.

If someone is asking you to change a part of yourself that you’re proud of, you need to put your wants and needs above theirs. I know it’s easier said than done, especially for girls who live in households that will not tolerate it, but the very least you can do is make a conscious effort to be better yourself. We always complain about the grownups in our society and how they’ve made this a considerably crappier place to live in, but in many ways we are becoming just like them, and we need to stop.

I promise you, you don’t need to comment on what that girl’s wearing or who she hangs out with. You don’t need to gossip with your friends about the scandalous thing she did – it’s none of your business. I promise you, there are way more interesting and productive things to talk about. There are so many things you can put your time and energy into; people and causes that need your help. Instead of building walls between yourself and other girls and women, you should embrace them, empower them, and tell them they are beautiful, because they are. You’d be surprised how much more we can accomplish when everyone is confident in themselves, proud of themselves, and loves themselves. We must remember that it’s much harder to do those things when the women you surround yourself with keep tearing you down.

I was ashamed of my body for most of my life, from as far back as I can remember. I will be 20-years-old next month and it took me this long to realise that there isn’t a single physical thing about me or any other girl in the world that needs to be changed. The only things that need changing are the toxic mind-sets we feed into, most of the time without even realising we are doing so. Hatred breeds hatred, and more importantly, it breeds unhappiness.

If you want to know what real happiness feels like, try replacing every negative thought about another person with a positive one. Try admiring people for how different they are rather than judging them for it. Try not saying anything if you really can’t think of anything nice to say. Build other women up, don’t tear them down. The other people in their lives are already doing a pretty good job at that.

The writer is a film major at Bard College in New York.