Zulfikar Ali Bhutto Jr and Maria Toorpakay Wazir will have none of this gender conformity nonsense, and we salute them 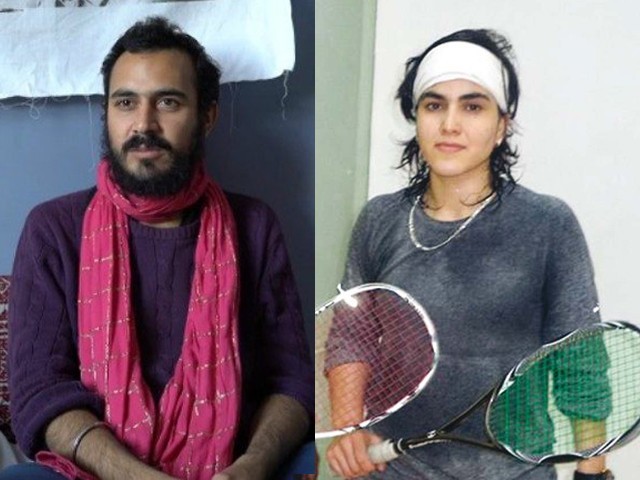 Both are extraordinarily brave people who had the courage to go against the dictates of society.

A few days ago, I had the privilege of watching two videos. The central individuals in both the videos are totally different. One is a scion of the most famous political dynasty of Pakistan, while the other was born into a more humble background but managed to garner fame and success through talent, determination and hard work. One is a bearded young man who speaks softly and eloquently, while the other is a tough-looking female who talks in what would be considered a “masculine” manner in our society.

One is a man who is trying to tell the world that masculinity need not be violent and that one can be soft and gentle. Furthermore, while performing, he is not even afraid to put makeup on and can be seen knitting in the video. The other proudly talks about the way she used to beat up boys during her childhood and about her lifelong love for squash, which is considered to be one of the toughest sports.

Both of the above discussed individuals are different and yet strikingly similar. Both are extraordinarily brave people who had the courage to go against the dictates of society and in doing so, they have exposed the fundamental problems within it. Both have explicitly dealt with the issue of identity, particularly gender identity, and how it is socially constructed and conditioned. Both individuals have exposed how these socially constructed gender identities make men violent and place women at a severe disadvantage, forming the basis of the existing patriarchal structure.

The first video is of Zulfikar Ali Bhutto Jr (ZAB jr), the grandson of perhaps the most charismatic politician Pakistan has ever produced and the son of Mir Murtaza Bhutto, who had been a violent rebel during his life.

This #Pride month, we at the Turmeric project are inspired not by the lip service of multinational corporations to the #LGBTQ community, but by #queer people of color creating their own art, healing space, and third culture. For the first installment of our Artist Spotlight Series, we present Zulfikar Ali Bhutto, an amazing multimedia artist out of the San Francisco Bay Area. We talk about his Mussalman Muscleman series, masculinity, identity, third cultures and that DIY aesthetic.Queer South Asian Americans are so real, so beautiful, so brave and creative. Like and follow us at the Turmeric Project as we explore how queer South Asian Americans live, create, heal, and make their own worlds.#Pride #queer #qpoc #southasian #masculinity #art #muslim

In this video, he has castigated the West for its paranoia about ordinary Muslims and also delved into the way Muslim identity is shaped by this mentality. He has admitted that he is a queer Muslim. This admission is something that requires extraordinary candidness and courage, particularly when he belongs to a society which prizes masculinity and defines it in terms of brutal strength and even violence.

Unsurprisingly, his video is being ridiculed by many who are mockingly calling him “lady boy” and showing their astonishment that someone who belongs to the Bhutto family could do this. ZAB jr apparently anticipated it and his contention that masculinity can be gentleness becomes even more remarkable given the fact that his father actually opted for violent resistance against the Ziaul Haq regime and later died in a violent encounter in 1996.

While the father was willing to espouse violence (whether for a just cause or not is a separate question), the son is actually denouncing it openly and also questioning its basis for defining masculinity. He cites the fact that in addition to his father, his grandfather, aunt and uncle, many of his near relatives died a violent death and this lead him to denounce violence. He goes on further to criticise the notion that the leader of the nation should be a strong dominant male.

His fame has ensured that this counter view gets maximum publicity and I think it is a great development for two major reasons. Firstly, we have an advocate for lesbian, gay, bisexual, and transgender (LGBT) rights in Pakistan and their cause has been boosted. Secondly and more importantly, the entire concept of the way masculinity is defined is put under a critical microscope. There is absolutely no doubt that traditionally, masculinity is considered synonymous with strength framed in terms of violence and dominance. In other words, a man should be strong and one of the major criteria of strength is the ability to exercise dominance and fearlessly exert violence. Femininity is then defined in contrast to masculinity and according to that definition, an “ideal” woman is pretty, delicate, shy and submissive.

This has become so “normalised” that we take it completely for granted. For example, when we want to appreciate the bravery of a woman, we try equating her to a man. For example, many a time, I have heard people say that a particular woman has more ‘balls’ than everyone else. This statement, though apparently appreciative of the woman in question, nevertheless is an outcome of the culture which equates so-called better qualities like valour with masculine physical attributes. Likewise, often a man who treats his wife as an equal is also ridiculed as “henpecked” and someone who is basically like a woman. Once again, this is because masculinity is defined in terms of male dominance over women.

Whenever we want to humiliate a guy, the “best” way is to simply call him a sissy and “girly”. Needless to say, this kind of framing has a devastating impact on the gender parity. Men become afraid of even treating women with respect and equality. In order to prove their masculinity, many are tempted to use their superior position in society for further subjugation of women of their household. Women who don’t conform to these definitions and expectations are branded as “disrespectful” and even of “loose” character.

The other video which features Maria Toorpakay Wazir is equally remarkable.

Here is a woman who has pursued her dreams against all odds and that too in a socially conservative area. The fact that she had to dress like a boy in order to participate in competitive events in earlier stages of her life speaks volumes about the enormous disadvantages a woman faces in our society. But even more remarkable is the fact that she has proven that women can be tough in a way that only men are expected to be. To hear her speak was a privilege for me and I watched and re-watched the video numerous times.

What exactly is bravery?

For me, it is the ability to resist societal pressure and to follow your heart. Wazir and ZAB Jr have shown us all the true face of bravery; they have slapped society by defying its expectations and norms.

Today, we talk about the need to change the status quo and are willing to give a chance to extremely reactionary politicians for that purpose. But what exactly is status quo? In reality, it is the existing social paradigm, and one of the major problems of this social setup is the gender imbalance which is sustained by problematic social conditioning.

The real revolutionaries are people like Wazir and ZAB Jr because they have shown courage and stood up to societal restraints. They are the ones that defy the odds, even if it makes them unpopular in their society.

Salute to both of them!