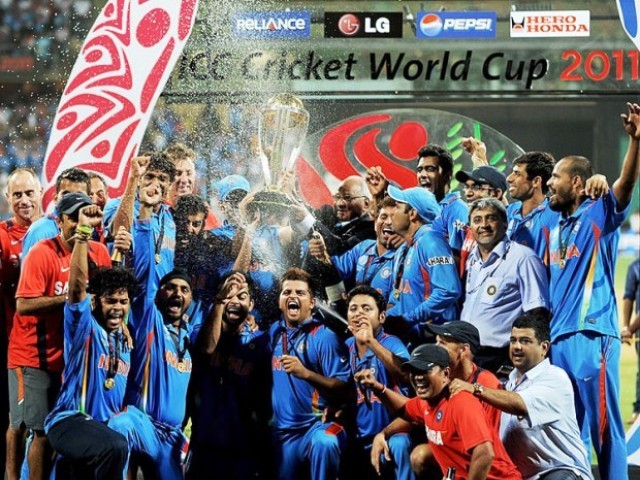 Mistakes will be forgotten and achievements exaggerated until the late entry of Sreesanth is seen as a phenomenal decision. Everything is so much more legendary in retrospect.

As confusing as the sight of Munaf Patel and Sreesanth holding the World Cup may be, when Tendulkar holds it, a strong case is made for eternal justice. What a fitting destiny for a player who ruled the sport for longer than many of his fans have lived. And his team seemed to acknowledge that, with constant dedications of the win to him, and by carrying him around the park. A special hats-off to Dhoni, who played a captain’s knock at the largest platform possible, and who earned this cup through brave captaincy.

Of course, when you use the words brave and captaincy together, the image of a smiling Shahid Afridi with his arms held in the air rushes to mind. If you were watching the last Zaheer Khan over hoping that he didn’t take another wicket because that would steal the highest wicket-taker status away from Afridi, then you are a true Boom Boom fan.

And that’s the thing with Afridi isn’t it? He’s an entertainer, he’s infectious and thankfully, he’s back in public favour. His apology to the nation for losing left the girls ‘aww-ing’ and now messages of pride are going around for him.

In an act of collective amnesia, we have forgotten that this is the same Afridi who bit the cricket ball. Many fans had vowed never to watch the game again, and many critics had said that this act was just as shameful (if not more) than the match-fixers. Hopefully, the difference is now more pronounced.

Afridi took a bite out of rules, risking his own career and fees, for us, for the nation. Match-fixers take a bite out of the nation and the game for their personal gain. With Afridi, there may be a lack of finesse, etiquette and level-headedness, but there is never a lack of intent, spirit or emotion. So he may try to bowl sneakily  before the batsmen is ready, or start tying his naala (trouser string) while speaking in front of TV channels broadcasting to billions of viewers, but that’s what makes him what he is: the rock star of cricket, the ultimate entertainer.

Rock stars may engage in drugs and profanity, but they make amazing music. It’s all part and parcel of the deal and that’s how Boom Boom rolls.

People who make a case for our country to be represented as disciplined, corruption-free, professional and articulate, make a case for misrepresentation. Our campaign cannot ride on those things, our campaign rides on passion and hunger.

And what a campaign it has been!

Few would have thought reaching the semis was possible from this depleted Pakistan team. Too often during the tournament were we painfully reminded of the 18-year-old left arm prodigy we could have had sharing the new ball. What a waste of talent, what a waste of youth. Such players are not born often; let us hope the next one is wiser.

And speaking of wisdom, I have yet to meet anyone who could explain the wisdom of Misbah’s semi-final performance. From dropping Tendulkar early in his innings, to blocking deliveries and rejecting singles until Umar Akmal exploded with frustration at the other end, he really was magical. I heard the BCCI announced Rs1 crore each for members of the Indian team. It would only be polite to extend that offer to Misbah.

However, despite the eventual self-destruction in semi-finals, things seem good for now. Fans are happy and critics embarrassed. There is hope that promising youngsters like Asad and Azhar Ali will bring fresher stability to the middle order while the aggressive Ahmed Shahzad and Umar Akmal develop around them. Needless to say, the cricket fever is back.