What better way of diverting attention from Donald Trump than by blaming Pakistan for all the ills of the world? 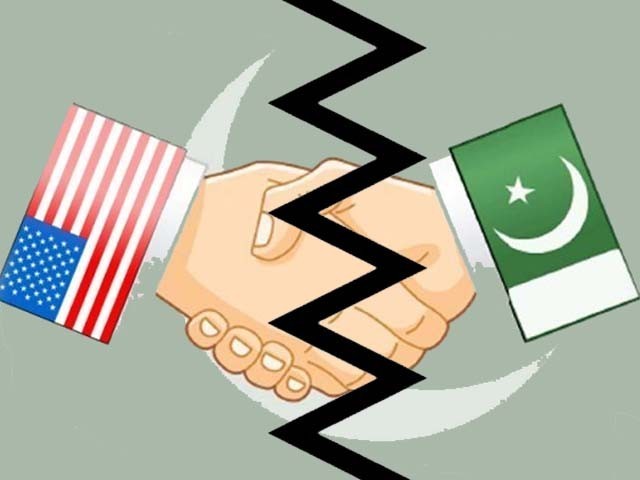 The US is welcome to harden its stance towards Pakistan, but Pakistan will continue to do what it deems necessary under its ‘strategic depth’ stance.

The world awoke earlier this week to another one of Donald Trump’s controversial insinuations. I call this an insinuation because the American president didn’t make any official statement himself, but had senior members of his staff hint at the possibility of his administration “hardening the line” against Pakistan. The revelation made to Reuters comes across as nothing new.

Pick up any article printed in any paper from any country about the US-Pakistan relationship and you will find the exact same content, phrases, threats and arguments. It usually revolves around the US lamenting that Pakistan is not doing enough and is in cahoots with militant groups that are bent upon hampering the US progress in Afghanistan.

This is followed by the threat that the US will restrict its aid and reimbursements to Pakistan for costs incurred due to the war on terror. This is usually followed by Pakistan stating that it is already doing more than its fair share and is facing enough casualties as it is. These articles usually erupt when some negative incident has befallen the US troops in Afghanistan or Kabul in general.

The impetus this time was the May 31st truck bomb that caused over 90 casualties in Kabul. As usual, American and Afghan media wasted no time in shifting the blame on to Pakistan-based militants for facilitating the attack. The Pakistani foreign office immediately started whining that Pakistan didn’t have a hand in it. The ultimate casualty was cricket, where the Afghan Cricket Board cancelled their tour of Pakistan. And then, the Trump administration started circulating whispers of “hardening the line” towards Pakistan.

For starters, it is never just about Pakistan. Trump is under investigation by the FBI for alleged ties to Russia and for illegally firing the former Director of the FBI, James Comey. Internally, he is under pressure for acting as a conservative lone-wolf without any regard for democracy. Externally, he is under pressure for pulling out of major climate and trade deals. What better way of diverting attention from himself by blaming Pakistan for all the ills of the world?

Second, the Afghan ambassador, Hamdullah Mohib, wasted no time in blaming Pakistan and projecting a tougher stance on it. By any stretch of imagination, Afghanistan is a mess.

First the Soviets came, razed the country to the ground and the Americans left Pakistan to pick up the pieces. Then again, as the Americans tried putting the country back together, it slipped into an anarchy of sorts. It seems as if the writ of the government only exists in Kabul, while all the money that has been poured into the development of Afghanistan went to shady contractors.

This is in addition to India positioning itself as a trusted partner of Afghanistan while pushing for Pakistan’s isolation. Recently, the two countries have even opened up an air trade route to bypass Pakistan altogether as they facilitate commerce. Interestingly, more than the utility of this route, all that the media highlights is how this route bypasses Pakistan.

Third, and most importantly, is the China factor. Ever since the US arrived in Afghanistan, Chinese companies have been lobbying for business in the region. Recently, China set up the Asian Infrastructure Development Fund with a $100 billion credit line, which has great participation levels from numerous countries.

The advent of the China-Pakistan Economic Corridor (CPEC) has the Americans further concerned about their dwindling effectiveness in the region. Where the US prefers to bankroll dictators and the ruling elite of countries, China makes a business out of it. Even in Pakistan’s case, no matter how much the media and think tanks complain about the lack of transparency regarding CPEC projects, they are still more transparent than the American funding, most of which doesn’t seem to trickle down into the economy.

The US aid agency, USAID, seems to have some projects going on in Pakistan, there is the US-funded Burka Avenger show and some energy initiatives, but for the most part, American funding goes towards supporting military endeavours. Senator John McCain has proposed a $7.5 billion Asia-Pacific Stability Fund primarily for strengthening military structures of Asian allies. Another issue with all these efforts is the fact that they depend on successive governments to fully succeed. For example, Trump has proposed a cut in the Fulbright program which provides scholarships to international students to study in the US at all academic levels.

The retired US Joint Chiefs of Staff Admiral Michael Mullen was famous for having stated that financial health is linked to national security. He believed that for the US to increase its military might, it needed to improve the economies of the countries it worked with. The benefit of this theory is multi-pronged.

One, it serves to spread money across the economy instead of an elite few sitting at the top of the pyramid. Secondly, adopting this approach means that the US would have some skin in the game and give it an incentive to follow through with a given task.

China is following this approach wholeheartedly. They may not have military inclinations, but they are approaching CPEC and other ventures as business endeavours. CPEC has ignited several businesses along its path and is generating interest from business groups world over.

Circling back, the US is welcome to harden its stance towards Pakistan, but Pakistan will continue to do what it deems necessary under its ‘strategic depth’ stance.