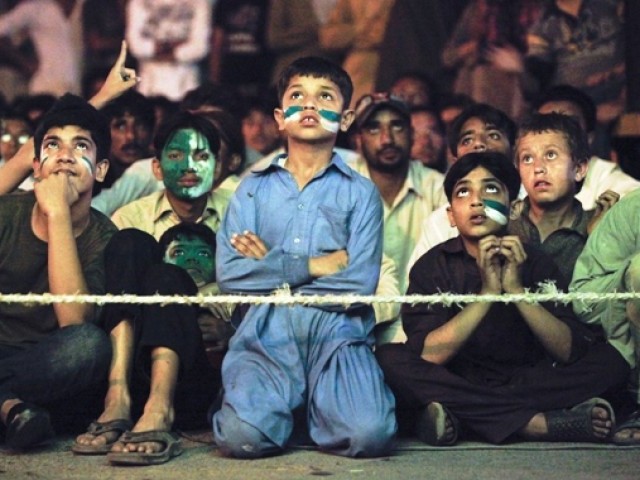 Cricket fans look at a screen along a roadside showing their national team's cricket match against India, in Karachi. PHOTO: REUTERS

My first day in Karachi coincided with the biggest cricket match that Pakistan has experienced in decades.

Picture this: The Express Tribune web room awash with young, energetic staff wearing emerald jerseys over jeans and shalwar kameez, hurriedly filing stories so they can rush off to their government-sanctioned cricket holiday.

They’ve all got one eye on the tiny TV mounted at the ceiling, not wanting to miss the toss when the bumbling, jet-lagged American, slips behind a desk and says in a deep-fried drawl:

A marvelous way to endear myself to my brand new co-workers, isn’t it?

The truth is, despite growing up in Mississippi, I’ve never had a southern drawl, and I did have a vague concept that this match—which strained celebrity marriages, stalled two nations worth of workforce and fueled media soliloquies of peace on earth—meant a lot, to a lot of people. But I know this only because I’ve been following Pakistani media.

We don’t have cricket in America. In fact, a year ago in a Sri Lankan neighbourhood of Queens, New York, I remember seeing signs of  “live cricket” in restaurant windows and assumed they were advertising some sort of insect cuisine. It seemed logical. The Dutch eat grasshoppers, don’t they?

Cricket in the cafeteria

With the match underway, I joined the co-workers who had snuck out to the cafeteria and tried to make sense of the drama on the huge screen before me. It’s like baseball, but the diamond is much smaller, the swing is much lower and the “three strikes” part goes on for eight hours.

In the hour before I grew bored and went home to sleep off jet-lag, I don’t think I gained an appreciation for cricket. What I can appreciate is that cricket seemed to unite everyone in the room.

In our cafeteria, flatware met metal trays in surprisingly rhythmic drumming. People hugged, blasted whistles and danced on benches in a group display of optimism and anticipation. Everyone seemed happy and, despite the fact that they were stuck at work, happy to be together.

Cheer together, mourn together

Professional sports seem ridiculous when considered as a celebration of brute force, a massive national distraction and a breeding ground for greed, corruption and wasted resources. But despite the behind-the-scenes politics, sports can be an easy, unburdened unifier, offering everyone a chance to identify with something bigger and more celebrated than oneself.

In sports fandom, your socio-economic status doesn’t matter. The only qualifier is that you profess an affinity for a particular geography. If we perceive our sports teams in superhero terms, then by extension, we get to perceive ourselves as superheroes. And we get that warm fuzzy feeling that comes from living in harmony with others, even if that harmony is illusionary or temporary.

Religion, politics and the military hold this kind of power, but often these entities are as divisive as they are unifying.

So Pakistan didn’t win the big cricket match, and many of my coworkers are upset. But the entire nation gets to mourn together, which is somewhat comforting. And that momentary bond forged by cheering together at a cricket match may help two strangers view each other more compassionately.

The Cornered Tigers didn’t win but as I watched my coworkers cheer together and dance on benches I think I understood a little about why cricket matters.