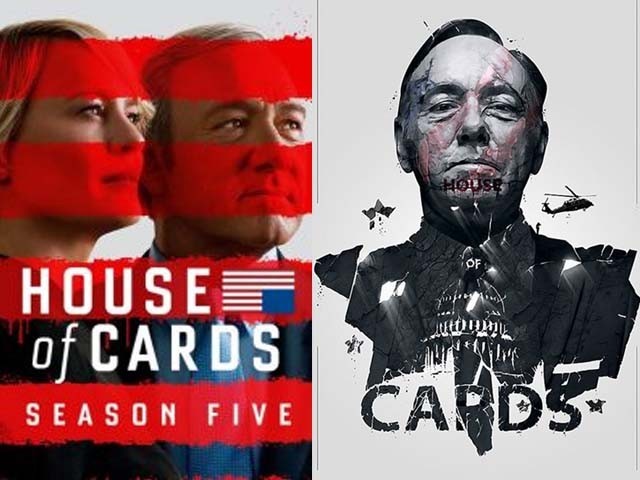 For a show that calls itself House of Cards (HoC), you’d expect its cards to start falling at some point. Maybe in the span of five seasons, 65 episodes and much screen time, you’d expect that to happen. But the Underwoods, it seems, never run out of their cards – with every snail-paced episode, the duo acquire more cards than Patrick Bateman collected in the entirety of American Psycho, advertently ending up being invincible.

As disappointing as it is stagnant, the show is back to square one when even the world’s slowest elements are speeding up – Sahir Lodhi’s inability to display rationality has sped up, heck, even Pakistan’s run rate has sped up as per this Champions Trophy. If there’s anything that hasn’t sped up, it’s HoC, where the cards seem to have been glued tightly by an insidious tube of Kragle – potentially orchestrated by Mr Everything-in-congress-is-my-business Underwood (Kevin Spacey) so as to keep his Legoland under his supreme control.

To try and pinpoint exactly where HoC went wrong is as impossible as trying to predict Shahid Afridi’s plausibility to pull off his boom boom stereotype to perfection. Funnily enough though (and pardon my cricket analogies, but it’s been a bloody good cricketing season and the euphoria has not yet faded), this season of HoC felt very much like a classic Afridi innings. For the first 10 episodes, nothing really happened, all was hush-hush, and it’s not like the show didn’t try – they simply pulled an Afridi on us by practically underperforming for the bulk of the season and then accelerating to such high speed in the culminating episodes.

Season five began with a promising Frank barging into a hall and delivering a stunning speech, proclaiming he will not yield. But as the plot progresses (or doesn’t, as it happens this season), one feels that it’s the writers who will not yield; they will not yield to a HoC without the ultimate supremacy of the Underwoods, and that’s where everything goes wrong for the show.

Here are seven reasons which explain why HoC fell short this season and the points at which it refuses to arrive – just like the electricity in Karachi during sehri.

1. The Underwoods are invincible

At this point, they should just rename the show ‘The Invincibles’ and be done with it.

Remember that snappy, smirking and scheming sari-toting femme fatale villain in those Indian soaps your mother used to watch on Star Plus, the ones who always had a plan and a backup plan? Yeah, that’s pretty much the Underwoods at this time, and it’s easy to see why this particular season was more unimpressive than even Sehwag’s tweets.

The Dany arch in Game of Thrones is still more prone to being in a pretty kettle of fish as compared to the Underwoods. Dany has her dragons, the Unsullied, the Second Sons, the Martell army, the Tyrell army, Tyrion Lannister, Lord Varys, Yara Grejoy, and the Dothraki.

The Underwoods have Doug. And that’s all they need to stay one step ahead of anyone who dares rival their supremacy. Whatever other weapons they might have, such as Frank’s sociopathy, pales in comparison to the miracles Doug’s hugger-mugger can conjure up. From getting unsuspecting redheads out of the way to excommunicating hactivists to bullying congressmen, Doug is the man.

He does all the dirty work, all by himself, all in the span of a few hours, and still has time for side plots. It often strikes me how the subtraction of the ‘U’ from Doug’s name can explain so much about him, and that he prefers to thrust the Underwood stamp at anyone he meets literally explains how he is a stamper. Doug is to Frank what Davos is to Stannis, sans the onions and the humanism. Never the underdoug and always there for the rescue, Frank can proudly say that a Doug is a man’s best friend.

3. Surprise characters nobody cares about

Instead of bringing back familiar faces, the likes of Jackie and Remy, we have someone named Mark Usher (Campbell Scott) and Jane Davis (Patricia Clarkson) and half a dozen other new faces which have popped out of nowhere. Not only did they apparate out of thin air, they are all suddenly major players in the game, posing a serious threat to the Underwoods. But we all know that nothing is ever a threat to the Undertakers of Washington.

4.That one character nobody cares about

Speaking of surprise characters, the only unimportant familiar character the writers decided to bring back to the season was the extremely annoying Tom Yates. He has no significance to the overall plot and no precedent to be in places like the Situation Room at the White House. He has no discernible poetic prowess to be called a writer and no character to be courted by Claire almost-a-Queen Underwood. And yet he’s there, boring us with his monotonous voice. Perhaps viewers would have cheered his death had it come earlier on, but by the time he died we were skipping all his scenes anyway.

Speaking of skipping scenes, a number of side plots, dialogues, and monologues this season are so irrelevant to the overall plot that you can skip them and still make sense of the show. Skip the Doug side plot. Skip the other Doug side plot. Skip the Mcallen/Leann romance. Skip the Frank/Eric bromance. Skip all the times Frank and Claire are regurgitating their previous conversations. Skip to the 10th episode, if you will, and you’ll still make sense of the season. Needless to say, skip all Tom Yates scenes to escape death by boredom.

Do we really need to see Doug and Leann warm up to each other when one of them is going to die soon after? It’s like the show knows how linear and Underwood-centred it is, so in order to remind us that the HoC universe does not revolve solely around them, the writers allude to characters long insignificant.

HoC had some memorable monologues in the earlier seasons and daring plot twists to spice it up. This season, we had Claire break the fourth wall only to say the most vague and unimpressive of things. She doesn’t communicate with the viewer as often as Frank does, and her breach of the fourth wall seems more or less forced, almost like a way out for the writers. They have to do away with Frank for the time being, so they mould Claire into the very same vessel. There is no variety or ingenuity. It’s plain repetition and it’s plain boring.

The grand reveal of the final episode, followed by a painstakingly slow season, seemed forced just as well, instead of giving the vibes of a plot twist. So Frank planned it all. Cool. Nobody’s surprised. He plans everything around here.

It seemed as if the writers were having fun with getting the dirt on Frank out in public, but then realised they just can’t discard their ultimate ubermensch fantasy, and so Frank was written off as the mastermind behind his own demise, which made zero sense. It’s tosh. It’s nonsensical. It’s bollocks. The Frank we know from the first four seasons wouldn’t have done it. The only reason such a sequel should have been in order is the problem that the writers simply cannot part ways with the idea of Frank masterminding absolutely everything.

HoC has run its course and if the producers think they can stun us with Claire taking Frank’s position and doing the same things over again, they’re deluded. Plot demands progression and HoC is parched. Its latest instalment was devoid of humour and raft with filler dialogue, filler plots, and filler monologues. But most disappointingly, it was flooded with filler Frank and that did all the damage on its own.

The show is drunk on Frank, is possessed so completely by him that the writers fail to find a way out without abandoning him and his grand persona. It’s stuck in the Underwood limbo which dictates that the Underwoods cannot be destroyed.

If HoC proposes to continue on its linear, monotonous path, more people are bound to lose faith in it just as they have lost interest in it. There’s only one way HoC can recover, that’s by getting over the Underwoods. It’s a house of cards for Donald Trump’s sake, and it’s bound to come crashing down.