While a new day yields a new molester, our girls are still told it’s their fault 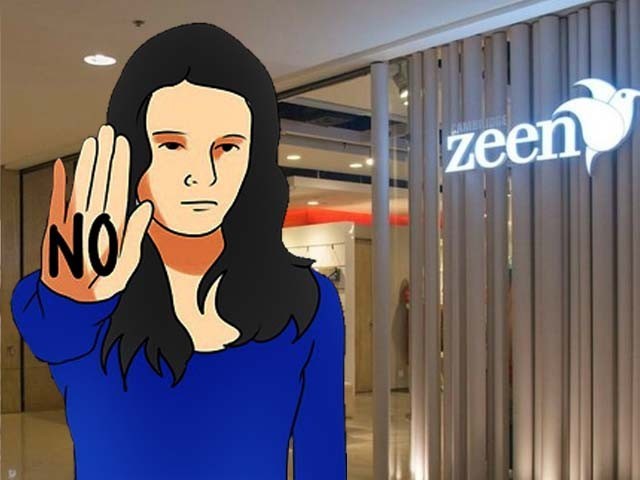 A customer was inappropriately touched by one of the fashion outlet's staff members.

“It was my first day at work. I covered my head like a good Muslim, didn’t speak to the opposite gender unnecessarily, still somehow by the time I returned home, I had a few extremely vulgar text messages from unidentified numbers on my mobile.

It shocked me because only a few family members had my new mobile number and I was 100% certain that it wasn’t a coincidence to receive such messages on my first day at work. I was frightened at the thought of someone at this new workplace having such a perception of me. That someone must have assumed I am open to the idea of having sexual relationships at workplace. I was frightened and filled with self-doubt. I traced back all of my steps during that day to figure out what exactly had I done to ‘encourage’ this kind of behaviour.”

This story was narrated to me by a friend a few years ago and it still makes me incredibly sad and angry.

Angry because we live in a world where survivors of sexual abuse and harassment are often led to believe that somehow they themselves are responsible for what happened to them. Children as young as seven or eight are told that the aggressive actions of monsters and vultures could be due to their clothing or behaviour. Want to avoid getting raped? Wear ‘decent’ clothes or don’t stay out late at night. Don’t like getting harassed? Don’t laugh a lot or loudly or don’t mix with the opposite gender.

That anecdote makes me sad because unfortunately, it isn’t the only story that comes to my mind when I think about sexual harassment. From streets to places which should have been considered safe havens like colleges, universities and workplaces, people, especially women, have to endure such unwanted and aggressive acts of intimidation on a daily basis.

Sexual harassment and catcalling are no alien concepts to women around the world. Hollaback, a global movement to end harassment, and Cornell University published results of the largest survey on street harassment in 2015. Out of the 16,600 respondents, the majority reported experiencing street harassment for the first time during puberty. According to the survey, over 50% women in 22 countries reported being groped or fondled in public. And this data doesn’t even include countries like Pakistan or Bangladesh.

If you are a woman and if you have been out shopping in Pakistan, chances are you must have experienced harassment first hand. From being leered at to ‘accidental’ touching, women in Pakistan are well aware of the dangers that lurk in our hustling bustling malls and shopping centres. There used to be a time when women walked in confidence on streets thinking that if someone bothered them, they will create a ruckus and inevitably hundreds of men will come to rescue them. But now, the society has degenerated so much that after each incident, every survivor is reminded that their outfit could have been the reason behind this ‘reaction’.

Recently, a similar incident happened at one of the fashion outlets where a customer was inappropriately touched by one of the store’s staff members. The incident sparked furious debates on social media and obviously, suggestions came pouring in from fellow ‘concerned’ citizens that she should have covered herself up ‘properly’ or that she shouldn’t be out in a mall at all. Admirably, the management took swift action and fired the staff member in question. It is one of those rare examples or outcomes in today’s world which gives me the courage to even write on this subject.

When I was first asked to write a blog on this incident, I thought to myself that perhaps it wasn’t a good idea because people are going to launch personal attacks online. They might harass me on Twitter. They will use religion to somehow prove the survivors are at fault, no matter what. They will say things which will make me furious but then I told myself that these inculpations haven’t stopped me in the past and they won’t stop me in the future.

I can quote a few personal examples as well, of times when misogynists told me how women were responsible for everything bad happening in this world. Believe it or not, I was told in a professional setting that it was mentioned in the Holy Quran that women were created to test men and they were evil creatures. Yes, I am not making this up, I wish I was exaggerating or joking, but sadly I am not.

‘Good’ Muslims often forget that they should be very cautious when quoting sacred texts or when using religion to justify their own actions. The main problem with that is that since none of us are perfect, we will make mistakes, and when our flawed personalities become ambassadors of our religion, people will criticise the religion and not the followers; case in point – terrorism. Secondly, not every person in this world has to believe in what you believe in. So by saying things like, “Oh but women are asked to cover up in Islam”, you are essentially condoning acts of violence against those who don’t cover themselves up which is extremely disturbing and just plain wrong.

Having said that, I do acknowledge that the problem isn’t confined to Pakistan or other developing countries only, catcalling is fairly common in developed societies as well and the only explanation that makes sense to me is that for centuries we have been asked to blame the survivors of sexual violence. After all, we like easier options and what’s more convenient than tarnishing a person’s reputation once they are already hurt. When we blame the ones being affected after such incidents, we often forget a few important aspects.

Clothing doesn’t have anything to do with someone else’s behaviour. Women who wear the burqa or abaya are harassed as well. Have you seen the video where a woman with a young child is being harassed by a man at an exhibition at Expo Centre Karachi? Do you think that children as young as two-years-old are raped because they were wearing provocative clothes?

Blaming the survivor is not only damaging to them, it damages the moral fabric of the society by normalising acts of aggression. When you say a man must react to his impulse if a woman provokes him, it discredits a man’s ability to control his urges. It derogates a man into some sort of beast that lacks the capability to think and do the right thing.

Expecting a survivor to ignore harassment because the problem is so widespread is basically giving a green signal to aggressors. Every time you tell a survivor of sexual harassment to stay quiet, you are also telling the abuser to continue pushing boundaries further and further.

I won’t end this blog by begging men to have empathy for women and by saying things like ‘but what if it happened to the women in your family’. No, women don’t need to shoulder the burden of men’s actions anymore. But believe me, when morality is lost in a society, everyone gets affected. There comes a point when these beasts stop caring about their target’s age, marital status, and even gender. We hear about cases of young men and boys being abused all the time. Think about it, what sort of world are we planning to leave behind for our future generations?