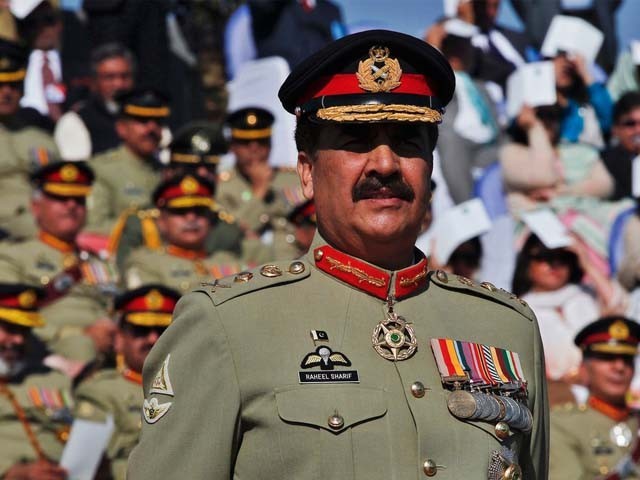 Similarly, when Operation ‘clean up’ started in Karachi, large sections of the Urdu speaking population applauded General Sharif’s efforts despite the sometimes heavy handed tactics of the Rangers. This even included some long-time supporters of the Muttahida Qaumi Movement (MQM).

The lawlessness and violence in the streets of Karachi had just become too much for everyone. If it took the dismantling of some formations of the MQM and the Pakistan People’s Party (PPP) (for example, the Aman committee) to bring it down, so be it.

General Sharif’s single-minded devotion to his job and his statement that he will not ask for or accept an extension in service increased his stature further in the minds of his countrymen.

The initial news that he had been offered an appointment as the head of the Saudi-led coalition to fight terror and had asked for a No-Objection Certificate (NOC) from the government to take up the job came as a major surprise. This was also so since around that time, the Pakistan Parliament had unanimously voted to stay out of the Saudi-Yemen conflict and had decided not to send any Pakistani troops to fight there.

Pakistani TV anchors also almost uniformly thought that this was not a good idea. They feared that it would aggravate the already tense Sunni-Shia situation in the country, since the alliances, goals albeit unstated, seemed to coincide very closely with Saudi policies, which had become increasingly hostile towards Iran.

However, the situation cooled down when announcements came from the government about how this appointment had not yet been finalised, and any decision would be taken purely in the interests of Pakistan. Then suddenly, one fine day, we hear that General Sharif has accepted the job in Saudi Arabia. This took us all by surprise.

Rationalisations immediately started appearing in the media about why this was necessary and why it would be beneficial for Pakistan. I sent an email to a prominent TV anchor when he changed his position asking why the sudden change? To this he replied,

“I am not going to get screwed just because of you.”

Obviously, something bigger was afoot.

The media now started claiming that the General’s presence in the alliance would help to ensure that it would not have any sectarian undertones. It was even stated that perhaps the former General may be able to help bridge the gap between Iran and the Saudis and bring peace to the Islamic world.

This was obviously naïve thinking. Not because General Sharif would not have preferred to do this, but because this would be the last thing that his employers and their sponsors, the US, would want him to do.

This has now become very clear after President Donald Trump’s recent meeting with the heads of the Muslim states in Saudi Arabia a few weeks ago. Under Trump’s and Saudi marching orders, the coalition’s prime objective became very clear – to eliminate Iranian influence in the Middle East.

The situation has become even more complicated with the current crisis between the Saudis and the United Arab Emirates (UAE) on one hand and the Qataris on the other. This has added another reason as to why Pakistan’s siding with anybody in this mess should be avoided, which luckily, it was. This is developing into a multi-faceted problem which any physicist and mathematician would tell you is very difficult to solve. Therefore, it is best to stay out this kind of a situation.

However, let us take a step back and ask ourselves why in the world is the US so concerned with Iran at this time?

Even though the country has shown many signs of a more moderate approach to international affairs, it has signed a nuclear deal that guarantees that it would not produce a nuclear weapon, has gotten rid of its fissionable material and the recent elections have returned the moderate president with a majority. This indicates the path that Iranians would like the country to follow in the future.

There is the Israeli reason of course, and their lobby in the US. But it is obvious that Iran is no threat to Israel and both Israel and the US know this, despite the insane assertions in the past of some Iranian politicians such as Mahmoud Ahmadinejad.

Now Iranian Shia influence in the Middle East may worry the Saudis, who are proponents of the Wahabi sect. However, since when have the US become concerned about whether the Middle East was Shia or Sunni? I bet they would not know the difference between the two and certainly do not care.

Could it be that their real concern is that a new coalition seems to be forming in the Middle East, one in which Iran and Syria are backed by Russia and the rest by the US? Now with Iranian influence in Iraq and Saudi support to the Islamic State (IS), the US could tip the Iraqis to go into the Russian camp or at least be more sympathetic towards it. Is their real worry about a resurgent Russian influence under a more aggressive Vladimir Putin who has just swallowed up the Crimea? Is there a new Central Treaty Organisation (CENTO) in the making?

Back in the 1950s, Pakistan sided with the US against the Soviet Union in an analogous situation. This alliance was sold as necessary at the time since it would give Pakistan a military capability that was required then in view of the aggressive military posture of our neighbour.

However, Pakistan paid a price for this friendship. As part of this alliance, we had to side with the US and allow them to use our bases to target the Soviet Union. I recall after the Central Intelligence Agency (CIA) pilot Gary Powers’s ill-fated U-2 flight into Soviet territory from an airbase in Pakistan, President Leonid Brezhnev and Foreign Prime Minister Andrei Gromyko said that we had to watch out since Soviet rockets were targeting our major cities.

This was followed by a cooling off in relations when President John Fitzgerald Kennedy came to power in the US. But then this alliance was resumed with great gusto after the Soviet invasion of Afghanistan. This was done in the late 1970s even though we had seen that in the early 70s, Pakistan-US ties and memberships in CENTO and Southeast Asian Treaty Organisation (SEATO) had been of little use when Indian troops walked into East Pakistan and resulted in the creation of Bangladesh.

What the Pakistanis did not know, or were not told, was that there was no provision in the CENTO and SEATO agreements equivalent to the ‘Clause Five’ of the North Atlantic Treaty Organisation (NATO) agreement which states that an attack on one member would be an attack on all. Thus, the alliance gave Pakistan no protection against an attack from India, which was its primary concern. The Russians never had any intention of attacking Pakistan and never threatened it until provoked by the U-2 incident. We are seeing the results of this intervention till today in the form of the Kalashnikov culture, increased sectarianism and religious terrorism.

Now with General Sharif’s appointment, which I do not believe has been done without the support of the government, I fear that we may again be taking sides with the US in another super power conflict. It is based on this reasoning, in addition to the already stated danger of increasing sectarian tensions in the Middle East, that I feel Pakistan should stay strictly neutral and not fold under pressure in this area. Most importantly, the general should recuse himself from this position.