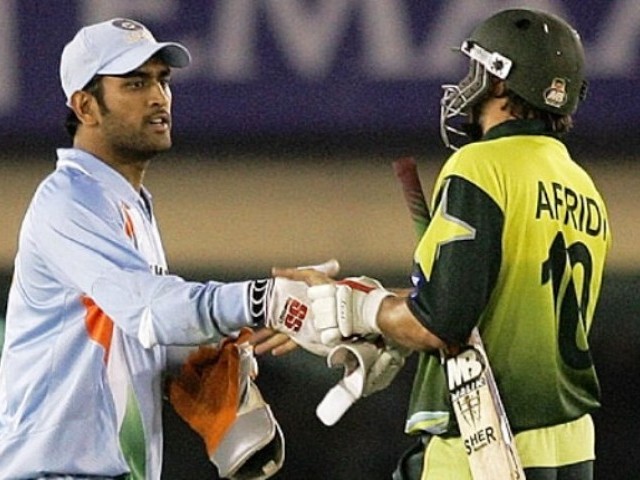 In November 2007, I went to Mohali to watch a Pakistan versus India match.

We crossed the Wagah-Attari border by foot – a monumental step in my life.  I was struck with mixed emotions, the joy of visiting India and extending our message of peace and love. At the same time, I remembered the stories of hardship my ancestors faced while migrating to Pakistan in 1947.

It took nearly six hours of waiting, tedious registrations and formalities amidst heavy police protection at the Indian side of the border.

A large number of Indians were walking towards the border for the evening ceremonies, but as they walked past and saw our Pakistani flags hanging out the buses, every one of them smiled and waved at us, welcoming us to India. The Indian side was exactly how I imagined it, the same as Pakistan except with a lot more Caucasians.

The buses with Pakistan fans enroute to Chandigarh were escorted by the police.  We travelled on the historical GT Road. As I looked out the window, I could hardly tell that I was in a different country. Only the billboards and writing on the walls in Hindi made me realise that I was in India. I was amazed at how much we had in common, and how at home we could feel in each other’s countries; we greet each other more heartily than anyone else, but are still so hostile towards each other. It’s almost unfair.

Match day arrived and the Pakistani fans were ready for a party. We tied Pakistan flags to the front of the buses as we travelled from the hotel to the stadium. Many of us had flags hanging out from each side of the bus to let our presence be known in Chandigarh. There was not a person in Chandigarh who saw us and didn’t wave or smile.

As we arrived at the stadium in Mohali, thousands of fans waited in lines and as they saw our buses approach and a loud roar of cheer and whistles began.  They greeted us with boisterous cheers, and we felt ecstatic!

As soon as we got off the buses outside the Punjab Cricket Association (PCA) Stadium, we were surrounded by a media frenzy. I never thought I’d be interviewed by Star TV but here I was delivering a warning to India: “Rawalpindi Express will run everyone over today!”

Many experts have called PCA Stadium in Mohali the best cricket stadium in India. It’s easy to understand why. I have seen many matches in Gadaffi Stadium, but I always felt that the experience of watching the game at the Gaddafi stadium is lessened because the fans are restricted some 500 feet from the boundary rope. You’ll never see a six land in the crowd in Lahore.

But not in Mohali; our balcony seats were just above the long off boundary with the dressing rooms underneath us. It is a beautiful stadium, lush outfield, has good seats and looks very glamorous, consistent with India’s economic progress.  I felt like a little boy in an amusement park.

I watched avidly as Sreesanth and Irfan Pathan practised just a few feet below me.  I couldn’t help myself from shouting:

Bohat boltay ho tum, Sreesanth! (you talk too much, Sreeshanth!)

He looked back sternly and noticed a couple of guys with Pakistan jerseys and responded quickly:

Wickets bhi mein he loon ga!” (And I will be the one to take wickets too)

This brief exchange led to loud laughter from everyone in the crowd. It was even funnier because Sreeshant was not included in the playing 11 for that match!

It started off well for us. Shoaib Akhtar bowled Ganguly out in the first couple of overs, but from there on it was all Sachin Tendulkar at his best. He played beautiful shots all over the ground as he has done for ages, entertaining fans from both sides of the border.

Gambhir played a good hand, but it was Sachin who stole the lime light, he was on 99 not out. The noise in the crowd grew so loud, people were jumping up and down waiting for their hero’s 100. I could feel the balcony shaking under my feet.

Umar Gul bowled a beautiful over, beating Sachin on a couple of occasions before getting a nick of his bat with Kamran Akmal holding onto a good catch.

The noise went from unbearably loud to pin drop silence as Sachin trudged back to the balcony below us for 99. We were jumping around and cheering since many of us thought this may be the only moment of happiness we’ll find in this match as India looked set for a big score.  A little later, Sania Mirza arrived in the gallery above us and there was much excitement for all the guys.  Marriage and other proposals were being offered.

Led by Younus Khan’s brilliant 100, Pakistan batted wonderfully. We cheered every four and six as Pakistan kept pushing India on the Diwali eve.  In the end, Afridi came and did his magic; we needed fourteen runs from nine balls when Afridi launched a huge six off RP Singh. It landed a few rows before me and what a shot it was!

We had successfully chased 321 and were in a state of disbelief and ecstasy.

The Indian fans sitting behind us quietly left the stadium as we were left to cheer right to the end. There were handshakes on the field and off the field as well.  It was a great game of cricket and we thoroughly enjoyed watching Pakistan winning in Mohali.

These memories come flooding back to me as I wait with bated breath for the Pakistan India showdown on March 30.

To all those lucky fans that are going to watch the semi-final in Mohali, I am sure you will have the time of your life.