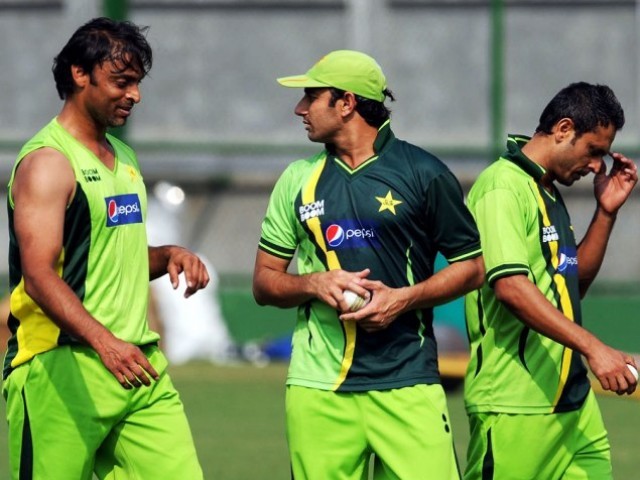 Pakistan will have to go for an all out invasion.

The Pakistan team faces a bowling dilemma as it prepares for the semi-final in Mohali.

Umar Gul, Abdur Razzaq, Muhammad Hafeez and Shahid Afridi will most certainly be on the team.

The questions to be answered are:

Strength:  Ajmal offers the amazing doosra and a whole lot of variety. Once he gets into rhythm he can pick up wickets at will.

Weakness: Unfortunately, he can be expensive if off color and at times in pressure situations, he tends to overuse the doosra.

Threat: The pitch at Mohali probably will not suit spinners. So unless he is taking wickets,  Ajmal is can be a bit expensive.

Strength: Rehman has extreme control over line and length and rarely ever goes for a lot of runs.

Weakness: He will most likely not give a match winning performance, and is more of a run stopper than a wicket taker.

Opportunity:  He is more than capable of drying up the runs if the need arises, especially if Pakistan have already posted a large total and do not need to bowl the opposition out.

Threat: If Pakistan becomes desperate for wickets, he is not a person that can be expected to topple the Indian batting lineup.

Strength: Akhtar’s got raw pace and a more intelligent cricketing brain now than he had in his youth.

Weakness: His fitness issues may be problematic, he can get tired fast and lose control of his bowling.

Opportunity:  Akhtar can pick up quick wickets and has the capability to run through the Indian batting lineup.  A few well directed and fast short ones can also rattle the Indians.

Threat: On a batting track he can be expensive if he does not hit the right areas. Batsmen like Tendulker and Sehwag can use his pace to hit him around the stadium.

Strength: Riaz brings the variation of a left arm seamer to the bowling attack and can create an angle to get a nick to the keeper.

Weakness:  He lacks the ability to bring the ball back into the right handed batsmen and can offer too much width at times.

Opportunity: Will be able to bowl across the Indian batsman and might incite a false drive or cut shot.

Threat: Unfortunately, he is a bit one dimensional, which can be a problem when he comes against a very good Indian batting lineup.

If I were to have any say in the team selection, I would certainly go for Saeed Ajmal and Shoaib Akhtar. Both are the more aggressive choices and I firmly believe if we are to win this match we would have to either bowl the Indian team out or come close to it.

Not only is the Indian batting lineup good enough to post a huge score if we do not take wickets, a big total will also get the hostile Indian crowd pumped up.

The Indian team is good enough to resist a siege by Pakistan; Pakistan will have to go for an all out invasion.

Canada vs Pakistan: Time for the cornered tigers to roar