Brilliant badmashi: How Nehal Hashmi got away with retracting his resignation 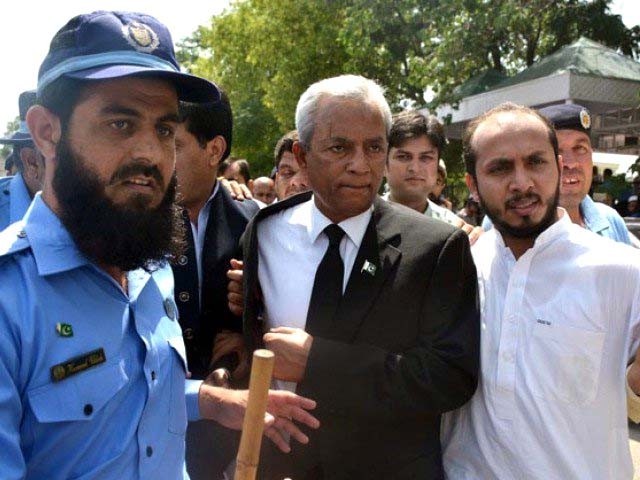 “The people who are trying to hold us accountable, listen closely. You shall not be spared.”

These were the ominous words of Pakistan Muslim League-Nawaz’s (PML-N) leader and future candidate for villain in a Bond movie, Senator Nehal Hashmi. Hashmi was referring to the joint investigation team (JIT) which had been tasked by the Supreme Court to further investigate Prime Minister Nawaz Sharif’s financial holdings, which has been the subject of the Panama Papers controversy in Pakistan.

It was slightly embarrassing for Hashmi that Nawaz asked him to resign from his senators seat for his comments.

“The prime minister has declared Nehal Hashmi’s speech as an irresponsible one,” said a PML-N spokesperson. In addition, Information Minister Maryam Aurangzeb confirmed that Hashmi’s party membership was suspended and he had been issued a show-cause notice. Statements against legal institutions will not be tolerated,” she said.

Many believed that this passionate defence of democracy by the PML-N leadership was motivated less by a love for accountability and more by the outrage that had followed Hashmi’s comments on social media. A video of his speech was highly publicised, and became the topic of conversation on social media platforms across the country.

So when does the dabang guardian of Pakistani institutions ch nisar issue orders to arrest nihal hashmi for threatening the judiciary/jit?

Senator Nihal Hashmi of PMLN threatens judges, members of the JIT of dire consequences after they retire, for probing Sharif family.

Alas, the loyal soldier who had gone too far for his master was given his marching orders. Hashmi handed in his resignation to Chairman Raza Rabbani, as media outlets, opposition parties and liberal activists declared a small victory for Pakistani democracy.

The victory, however, was short-lived. On June 6th, only a few days after he resigned, Hashmi withdrew his resignation from the senate, having decided that six days in political exile were enough to learn his lesson.

How did it get to this? How are Pakistani leaders allowed to threaten and intimidate with such impunity? The answer is in the genius of their design, which comes from prescient observations of the socio-political landscape of Pakistan. This is a three-pronged approach.

The first, in a bitter irony, is explicit intimidation of the news outlets which publish and analyse prior instances of intimidation. Using political clout to threaten journalists and activists and inching closer to the truth, is the bread and butter for Pakistani politics. According to an Amnesty International Report analysed by The Guardian from 2014, David Griffiths, Amnesty International’s deputy Asia-Pacific director, said,

“(Journalists) suffer at the hands of all sides – armed groups, such as the Taliban, government intelligence services and political parties. The government has promised to improve the dire situation for journalists, by establishing a public prosecutor tasked with investigating attacks against journalists. But few concrete steps have been taken.”

The second method is to prevent reporting of the fact from ever taking place. This is done through suppressing facts and events through controlling civil service agencies such as the police and enjoying patronage with the courts at the local level. As a Human Rights Watch report from 2016 states,

“Public surveys and reports of government accountability and redress institutions show that the police are one of the most widely feared, complained against, and least trusted government institutions in Pakistan, lacking a clear system of accountability and plagued by corruption at the highest levels. District-level police are often under the control of powerful politicians, wealthy landowners, and other influential members of society.”

Simply put, if one can shape reality, then it is futile for others to report on it in the first place.

The most nuanced part of the design, however, is the most problematic of situations. This is the situation Hashmi found himself in, where he could neither deny his words and actions, nor intimidate sources as the news had already pervaded most of the country and caused public outrage. Hashmi then decided to simply play the media against its own rules.

As an attentive observer he, or the PML-N, if it was complicit in the withdrawal of his resignation, realised that news cycles will inevitably lead to no one subject being focused upon for too long a time. The media had pounced upon Hashmi’s actions, until it didn’t. It is as interesting as it distressing to see that when news outlets reported on Hashmi taking back his resignation a week after his speech, it didn’t raise even a shadow of the opposition that had arisen when the public had first received news of his speech. The spotlight had moved away from Hashmi, and relishing in the shadows of obscurity, he had won.

In the Pakistani society, the common citizen can do little to completely reform the police structures or increase accountability in the courts. However, what we can do is keep our eyes open in times of political crises. Pakistan deserves more from us than just a passing interest in vigilance that wanes away with time. In a democracy, outrage matters. We must preserve it in patience, and direct it at those who try to slip away from our sights. It is only when the spotlight remains that the shadowy practices of political intimidation will start withering away.