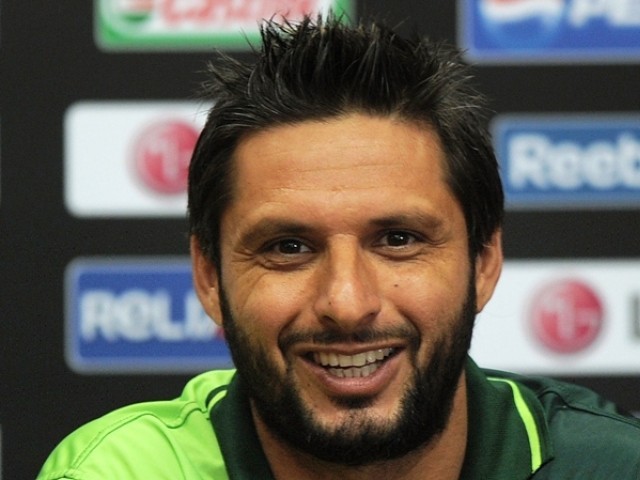 Shahid Afridi smiles as he addresses a press conference at the Punjab Cricket Association (PCA) Stadium in Mohali. PHOTO: AFP

As the much-awaited semi-final clash between India and Pakistan draws closer, both captains will be under pressure to make some difficult decisions.

Often teams have the tendency to make strategies keeping the opposition’s strengths and weaknesses in mind, rather than playing according to one’s own.

This is a tendency that Shahid Afridi will do well to avoid. India’s much vaunted strength in having brilliant players of spin, must not deter Pakistan from relying on their in-form spinners, who have played an important role in the 1992 champions’ spectacular run in the tournament. At the same time, the clamour that there has been for Shoaib Akhtar’s return to the playing-eleven, must be tempered with some caution.

Admittedly, fast-bowler Wahab Riaz has not been in the best of form and Akhtar’s experience may prove invaluable in a crunch match, but it must be kept in mind that he played his last match on March 8. The 22-day gap between then and the semi-final, may have had a detrimental impact on his rhythm and fitness. The team management must consider all the consequences of throwing him into a high-pressure encounter, after his absence from the team for nearly three weeks.

Another key decision that the management will have to make is whether to include Saeed Ajmal in the final eleven after his fine performance against the West Indies or go back to the left-arm spin of Abdur Rehman.

In the quarter-final, Pakistan exploited the presence of left-handers in the West Indies batting line-up brilliantly by playing the off-spinner. I feel Ajmal can play a vital role against the Indians as well, considering the presence of high-class left-handers like Yuvraj Singh, Gautam Gambhir and Suresh Raina in their ranks.

The upcoming encounter poses a difficult challenge for both the teams, as it has gained greater importance than even the final, for millions of fans in both the countries.

India were the pre-tournament favourites for the World Cup trophy and many experts still believe that they will enjoy the upper hand against Pakistan. On the other hand, Afridi’s men were not considered serious contenders to lift the trophy before the tournament began. Their exceptional performance in the run-up to the semi-final, leaves no doubt in my mind that Pakistan start off as favourites against the hosts.

The 1992 champions have become contenders to win the event through their performance and not through pre-tournament hype. And the team should take confidence from the excellent show.

A scenario that sees a World Cup semi-final encounter between India and Pakistan is a rare one indeed. It can be very easy for a player to become overawed by the prospect of playing in a marquee clash as this one.

Such an occasion comes only once in a cricketer’s lifetime and my advice to the players will be to enjoy the occasion and consider themselves fortunate to have the opportunity to play a match that will be remembered for years to come.