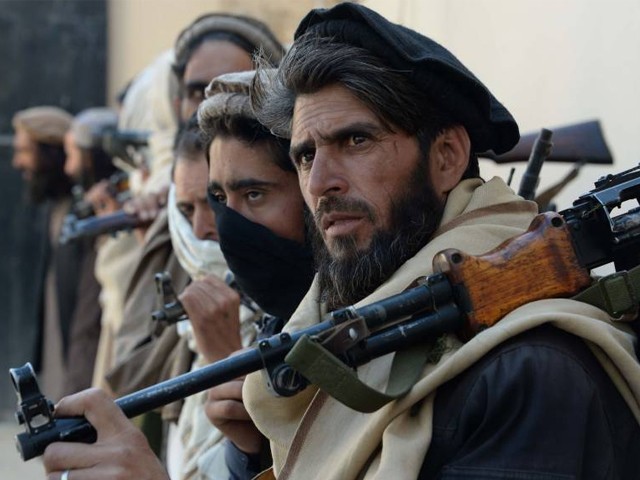 Afghan alleged former Taliban fighters carry their weapons before handing them over as part of a government peace and reconciliation process at a ceremony in Jalalabad, Afghanistan. PHOTO: AFP

In recent years, there have been growing concerns that Islam’s major problem, as well as the world’s, is Islamic radicalisation, since Islam is one of the major and fastest growing religions of the world. These concerns are being voiced in various countries and have yielded various reactions ranging from apologetic defence (whereby some of the western liberals interpret it as a ‘reaction’ to the US hegemony) to outright xenophobia.

Radicalisation is a major problem and there is no question about its lethal potential to inflict harm in the form of religious extremism and terrorism. However, though present, it is not as widespread in the Islamic world as is often projected by the media. If a major section of Muslims was actually radicalised, the situation would have been far worse. Most of the Islamic world, whether ruled by democratically-elected leaders or by autocratic strongmen, is by and large not radical. In fact, an overwhelming majority does not endorse or support suicide bombings or terrorism of any sort.

What has actually happened is that a critical mass has become radicalised, whereas a substantial majority remains moderate. In fact, the Islamic world itself has faced the biggest brunt of terrorism and therefore there is no way they can endorse it. Religious extremists are a fringe and they do not need to expand beyond that as they are not trying to impose Shariah (Islamic law) through an electoral process.

In my opinion, the biggest problem confronting Muslims is their state of denial about the presence of extremists in their midst and their complete inability to self-introspect. Even today, a huge percentage of Muslims do not believe that the 9/11 attack was conducted by Arab Muslims. In fact, a Pew Research Centre poll in 2011 found that even a decade after 9/11, there is no Islamic country (out of those that were included in the sample) where even 30% of the Muslims believe that Arab Muslims executed the 9/11 attacks. It even includes very secular countries like Turkey where a whopping 73% of Muslims believed that 9/11 was not conducted by Arab hijackers.

This denial is far more widespread and in some ways even more precarious than the extremism itself. Extremism, if recognised as a problem, can be fought through a combination of ideas and military action backed by political will. However, if the large chunk of the Muslim world is in denial, then this attitude inadvertently helps the militants by giving them ‘soft’ support. Most importantly, when you are not able to recognise a problem, then there is no way that you can expect to counter it.

For example, in Pakistan, we have been reeling under extremism for a long time and even now, the mainstream media continues to come up with complex conspiracy theories according to which militancy is not home grown, but planted by foreign powers. Even after the attack on the Shah Noorani shrine last year, many were just interpreting it as a conspiracy against the China-Pakistan Economic Corridor (CPEC) rather than another episode in the long series of targeting Shias and Sufi-following Sunnis.

This mindset has generated a lot of problems, chiefly being our inability to self-introspect, identify the core issue and then mustering enough collective political will to fight militants. Obviously, if the militancy is construed as a foreign conspiracy, then the fight against militants becomes a fight against ‘Pakistani’ people, militants become victims and war on terror becomes ‘their’ war.

I vividly remembered what happened in Swat in 2009. Militants, in a series of aggressive steps, took over the entire Swat region near Islamabad. As they kept on annexing town after town by force, stories started to emerge about their degrading attitude towards women, burning of schools and steps to curb even the basic liberties of life.

In fact, there was even a flogging video which showed a woman being lashed in public for the ‘crime’ of coming out of her house unaccompanied by a male family member. Despite the clear evidence, majority of the TV-watching Muslim population of Pakistan simply refused to believe it. Every news was labelled as western propaganda being carried out through their funded Non-Governmental Organisations (NGO) and their own media. Even when clear evidence was presented in the form of a video, the entire local media’s thrust was on proving it to be fake. The entire nation seemed to be in denial and the media was actually pressurising the government not to take any action against militants as, according to the Pakistani population, they were nothing but victims of western propaganda.

Then, militants forced the government to sign a deal which would enforce a strict Islamic law in the region. As the deal was being signed, the TV anchors were actually appreciating the step and trying to spin all the criticism as western propaganda. Literally, no TV channel was interpreting it as a deal brought through coercion.

In fact, none of them were even critical of the hard-line contents of the deal itself which, if successfully implemented, would have resulted in virtual elimination of basic liberties and complete enslavement of women. At that point, the US repeatedly criticised the deal and tried to persuade the government not to sign it. However, the government, under huge domestic pressure, was unable to muster collective political will and therefore ceded to the demands of militants.

Soon after signing the deal, the leader of the movement, Sufi Muhammad (leader of the insurgency) threatened to attack Islamabad if his version of Islam was not implemented across Pakistan. Since the speech was broadcasted live and there was no way that the people could deny the actual words spoken, everyone was in shock. Finally, people understood that Swat was indeed under militants. Although this led to a belated army action, instead of blaming the hard-line Islamic militants, people started to point fingers at the US. Suddenly, the ‘freedom fighters’ of Islam became paid agents. What happened in Swat is a classic example of how denial ends up supporting the militants.

Eventually, Pakistan’s population turned against the Taliban and finally action is under way. The opinion turned in favour of a military action, particularly after the gruesome terrorist attack on school children in the city of Peshawar. However, this action could have taken place much earlier if we had not been in denial.

Even now, the majority thinks that foreign powers are behind that and a host of Tehreek-e-Taliban Pakistan (TTP), as well as other militant groups’ activities. Once again, this takes the focus away from the real issue, which is of religious indoctrination instilled in the huge madrassa network of Pakistan. By obsessing over foreign powers, we are in fact ignoring the real causes. Although the current breed of terrorists may be eliminated due to the on-going military action, in the future, new breeds of extremists will continue to emerge. Even if we assume the foreign powers are involved, we are forgetting that they are able to do so mainly because our madrassa system facilitates them.

Closely linked with this denial is the habit of coming up with the apologetic defence whereby extremists act as if suicide bombings are justified as a reaction to some (real or perceived) atrocities committed by the West. The apologetic defence, although not denying the existence of the problem, does something even worse; it actually creates sympathy for militants rather than revulsion. Today, it is hardly surprising that a military response by Israel draws far more public condemnation from Muslims than gruesome atrocities committed by extremists groups like Islamic State (IS). Likewise, a few killed by the US drone attacks have enraged more Pakistanis compared to literally thousands killed by militants.

What this point of view fails to understand is that extremism, though at times fuelled by international events, is irrational in nature. You cannot cure it through the ‘understanding of the victim’ approach. Plus, even if that interpretation is true (which I don’t think it is), we need to realise that international events are largely out of the locus of control of Muslims and they cannot hope to cure real extremists in their midst just by lamenting about the so-called atrocities of the West.

It is thus this twin faceted mindset of the ‘moderate Muslims’, which gives soft support to a small minority of hard-line Muslims and allows them to flourish. The irony is that moderate Muslims actually condemn suicide bombings and other extremist acts and yet, due to their peculiar mindset, end up inadvertently strengthening the extremists. And as long as Muslims do not realise it, they will keep on strengthening the forces of nihilism and allow the fringe of hardliners to dominate.