Betting on Pakistan after #PakvsInd was a madman’s bet, but our team is predictably unpredictable for a reason 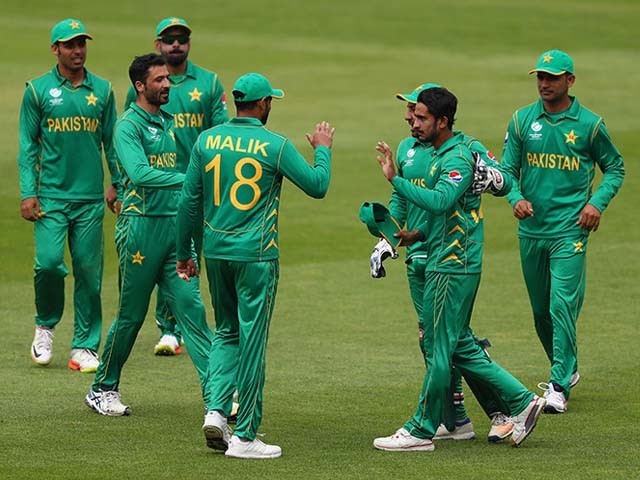 When the eighth ranked cricket team met the top ranked cricket team, there was little doubt about the outcome of the game. Being optimistic after Pakistan’s appalling performance in its last match against India was surely a madman’s bet, but team Pakistan is predictably unpredictable for a reason.

Wahab Riaz went off the field with a twisted ankle. Photo: AFP

In a match where everything (except Imad Wasim’s laser sunglasses) was different about the Pakistan team, South Africa was defeated by 19 runs through the Duckworth/Lewis Method (D/LS) in 27 overs. Was this down to the performance of Pakistan, or simply because the match ran half its course (read rain)?

Let’s see what happened before the rain in order to arrive to a conclusion.

This time, South Africa won the toss and chose to bat on a beautiful batting pitch. When they won the toss, they expected a Pakistan side so fragile and weak that a 300 plus total should’ve perceived to be a piece of cake. When they came on to bat, they were greeted by Pakistan team’s version of supermen.

It’s the little tweaks that affect the overall performance. The opening pair was no longer Wasim with Mohammad Amir; it was Junaid Khan and Amir. Khan came in because Wahab Riaz has been, thankfully for score-takers, ruled out of the tournament due to an ankle injury. And boy, the pairing was spot-on. There was no swing, but the couple did not let South Africa get away and kept both their star batsmen in check.

Junaid Khan will come in for the injured Wahab Riaz. Photo: Getty Images

What was criticised in the last game became Pakistan’s core strength in this game, albeit this involved better selection as well – the spin department. Wasim changed his hairstyle and changed his length, getting Hashim Amla leg before in his first over, following up with AB De Villiers in the next over. Oh and mind you, this was De Villiers’s first golden duck of his career, when he reached out to a skiddy delivery and was caught on point.

In this game, Mohammad Hafeez was also chosen as a regular bowling option (something that Sarfraz Ahmed did not do in the last game), and he brought the wicket of Quinton De Kock. But the pick of the bowling attack was Hasan Ali, who delivered a pumped up, aggressive performance with ball, getting crucial South African wickets before solid partnerships were developed.

Amongst all these changes, it seemed as if Pakistan wanted to impress upon South Africa what they have been historically popular of, the fielding department. Pakistanis were by no means as athletic, but the will power and uplifted fielding was there to see. There was no lackluster catching or inaccurate throwing. There was no lazy running and poor body language. You could sense they came in with an appetite, but when this appetite comes and goes, no one knows. In this game, it was consistently permanent.

Good bowling, good fielding and some luck going their way (Faf du Plessis got out through an inside edge, whereas De Villiers’s dismissal was one of those that just happen and you say woah, what just happened?) enabled Pakistan to restrict South Africa to a meager score 219-8 off 50 overs. They were 120-6 at one point, and a solid, crafty 50 from David Miller got them to a total they could bowl at. Miller got off slowly, and was kept regularly in check by some excellent death bowling (another avenue of improvement from the last game).

Could it be said that South Africa couldn’t cope because they don’t play spin as well as India does? It sure can, but that shouldn’t be Pakistan’s fault. They learnt from their mistakes, and improved upon them. This has been a rare sight in recent Pakistan performances.

When they came out to bat, debutant Fakhar Zaman took the sword to the South African bowlers. A batsman, with List A averages and strike rates of above 50 and 80 respectively, was still not considered in an ODI is as surprising as Pakistan’s attitude against India. His cameo of 31 off 24 balls, with some magnificent stroke play, gave Pakistan the momentum they needed.

But when a side is predicted to be fatally inconsistent, we all knew what to expect. He decided to whack a ball too many when he was deceived by an irritatingly consistent spell from Morne Morkel. The scoreboard read 41-1, which became 41-2 an over later when Azhar Ali, the other opener along with Zaman, departed with a lazy shot at third man. To aggravate the situation, this was followed by 20 balls without a score coming from Pakistan, as Hafeez failed to improve upon his strike rotation.

Fakhar Zaman is hurried on a pull. Photo: Getty Images

At this point, it looked as if a collapse is in order. A couple of good boundaries restored parity with the run rate but then Hafeez did a Hafeez, and got out after making 26 off 53 balls. By this time, however, Babar Azam’s uncomfortable stay at the crease looked much more comfortable, and the score was 93-3. It drizzled virtually all afternoon, and Pakistan were ahead of the D/L par score.

Shoaib Malik was next to come in to bat, and he and Azam added 24 runs in four overs after which rain stopped play. Pakistan were 119-3 in 27 overs, and were 19 runs ahead of the D/L par score of 100. The Gods intervened, and the rain did not stop, granting Pakistan a solid victory against the top ranked team in the world.

Shoaib Malik steers one through the off side. Photo: Getty Images

Before we jump on the optimism bandwagon, there is a critical analysis of what happened.

What if rain didn’t intervene? Pakistan were bowled out for under 200 in the last game, and have a history of collapsing midway through a chase. It is a blessing in disguise that rain stopped play, however, the confidence of chasing a 200-plus total (considered very poor in world cricket today) would have been priceless. Yes, they fielded well, bowled well, and had their adrenaline pumped, but there was evidence of choking when they chase. There were a couple of easy run-outs missed when South Africa were batting. There is still work to be done.

Ali, the Man of the Match, was excellent (three wickets plus an excellent catch followed by a passionate celebration), and also delivered a wonderful post-match interview.

What team Pakistan need to realise is that improving upon their mistakes is the way to go, but the trajectory should be consistently upwards, not one with ebbs and flows.

Hasan Ali was exceptional with the bal, returning with 3 wickets and the MOM award. Photo: Getty Images

Let’s drop the versions of our cricket team, and try to bring the best version in every game. We choked the chokers, as South Africa should’ve won easily on paper, but have yet again choked in a big tournament game.

Break a leg for the match against Sri Lanka, Pakistan!