Islamabad’s food is terrible, and posh restaurants cannot fix that 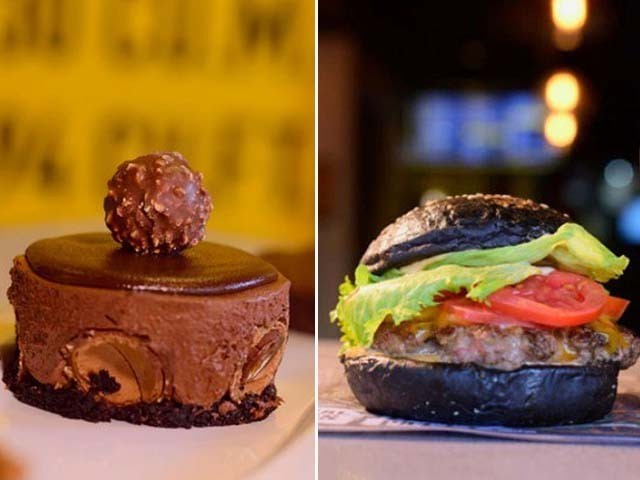 We are enthused by black burger buns, or ice-cream shaped like pancakes.

The people of Islamabad are deprived of good food, and as a Rawalpindi-based critic, I promise not to take too much pleasure in this declaration.

We are all aware of our guests from Lahore, our undisputed food capital, being notoriously hard to impress with nearly any kind of food found in Islamabad. Islamabad is a young city, and has not had time to evolve its own unique cuisine and celebrated eateries as many other cities like Karachi, Multan, and Rawalpindi have done in the last 100 years or more.

Islamabad, true to its modern self, has wholeheartedly adopted the global trend of ‘culinary gimmickry’. We are impressed by burgers and shakes that are shockingly huge, or adorably tiny. We are enthused by black burger buns, or ice-cream shaped like pancakes. We are easily enamoured by dynamic desserts, like an extra-terrestrial chocolate, something that smokes, whistles, and spurts a small fountain of ganache before the customer, who gazes upon the spectacle with child-like wonder.

This is not an unexpected trend. Social media has ensured the transformation of every user into a perpetual performer. When you enter a restaurant, your 516 Facebook friends follow you in to watch you perform at the table.  Visual appeal takes precedence over taste. Food is not just about the joy and nourishment it brings you, but the social value it adds to your life.

This trend is not limited to Islamabad in any way, and has been spreading just as swiftly through MM Alam road. What places Islamabad at a particular disadvantage is the fact that it never had a strong foundation of good cuisine in the first place to counteract this unpalatable trend. Those rose within reach of iconic foods like Charsi Tikka, Butt Karahi, Student Biryani, Kareem samosas, were able to strike some balance between culinary showmanship and plain good taste, while Islamabad was overrun by a virtually unopposed cult of presentation.

The only thing Islamabad’s largely well-to-do populace has known, are ad hoc eateries that win you over with Instagram-worthy décor and food designs, even before one factors in the cost and quality of the food. In the higher socio-economic stratum, the city simply has almost no precedent for wholesome, affordable food to which new upscale restaurants and their patrons may look up to.

Speaking of décor, our elite’s obsession with truck art must stop. We are the class of people who would rarely deign to see the inside of an actual dhaba and bless those underprivileged shopkeepers with our business. But let there be no shame in the wholesale appropriation of their cultural heritage to cover up the death-defying walayti (foreign) blandness of our upscale cafes and restaurants, selling a glass of lassi for Rs240 plus tax.

These extravagant cafes and restaurants are frequented by the same smug people who deride the less-refined Pindi-boy class, while also tripping over each other to revel in the art and cultural practices of those very same paindus. By what sorcery do you get to mock them and be them at the same time?

It would be unfair to deny the existence of both old and upcoming eateries in Islamabad that serve great food at a reasonable cost. The popularity of local breakfast spot, Cheema and Chattha, seems well-deserved. Hong Du Noodles, an authentic one-dish restaurant on Hilal Road, is a refreshing newcomer. A bowl of daal chawal (rice and lentils) in F-10 Markaz is a serious contender to any claim of desi culinary superiority laid by a kitchen in Rawalpindi. A curious food item consisting of sausages and French fries rolled up in fresh naan may seem precisely like the sort of ‘gimmick’ I was deriding earlier, but it works somehow! It’s affordable, tasty, hassle-free food, unless you consider the hassle of almost sentient sauce-drenched fries fighting to escape your naan and dive onto your lap while you eat.

There are enough decent eateries dotted around this city to give us hope. However, Islamabad is still a city of restaurants that bank on a moneyed citizen’s sense of curiosity and wonder, more than one’s sense of comfort.

While there has been an explosion of upscale cafes and restaurants in the last 10 years, Islamabad hasn’t spawned many cultural icons like Savour Foods, that bring together people of all classes, and that too originated in College Road, Rawalpindi.

And no, elite tea houses that play nostalgic Pakistani music, while soothing our post-colonial senses with European décor, do not fill that tall order. Somehow these are metastasising to other cities too.

Islamabad needs a new crop of restaurants that aims for something higher than catching the eye of the fickle upper class; for it’s only a matter of time before your clientele flocks over to a new restaurant with a prettier molten lava cake.

We need more places that are accessible, affordable, and have cultural appeal that outlasts the thrill of their novelty.