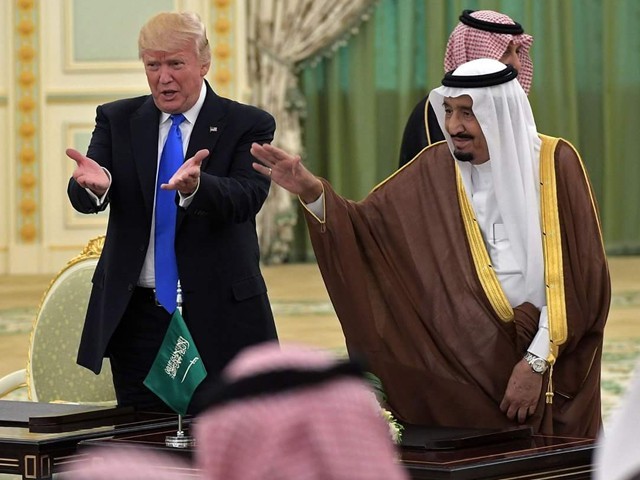 US President Donald Trump (L) and Saudi Arabia's King Salman bin Abdulaziz al-Saud gesture during a signing ceremony at the Saudi Royal Court in Riyadh on May 20, 2017. PHOTO: AFP

While the announcement that several Middle Eastern counties including Saudi Arabia, UAE, Bahrain and Yemen were outright banning all relations with Qatar, the fact that they actually did it has had reverberations across the globe.

Saudi Arabia declared a complete ban on all air, sea and land routes into and out of Qatar while UAE and Bahrain demanded the expulsion of Qatari diplomats from their countries. At last count, Libya and Maldives had joined the growing chorus against Qatar.

Qatar is a tiny emirate jutting out as a peninsula from Saudi Arabia towards Iran. While it is a member of the international oil supplying nation group Organisation of the Petroleum Exporting Countries (OPEC), its contribution to OPEC is less than 1%. It is, though, the world’s largest exporter of Liquefied Natural Gas (LNG) and sits on massive gas reserves. It shares exploration rights to a huge gas field with Iran as well.

While it was a sleepy Arab backwater prior to the 90s, it came of age in the new century and is now one of the richest countries by income per capita. It grew its state-owned sovereign fund Qatar Investment Authority (QIA) into a reputable investment vehicle and now holds stakes in some of the most reputable entities on the planet. It has over £40 billion invested across public and private entities in the UK alone. Moreover, it is also home to Al-Udeid Air base. This air base is the US Forward Central Command for all operations conducted across the region. It is also hosting the 2022 Football World Cup and construction of stadiums and athlete villages is taking place across the emirate at full-throttle.

Qatar has always been considered an upstart by its surrounding Arab nations. Over the course of its existence, it has been involved in territorial skirmishes with neighbouring Bahrain, border shootouts with Saudi Arabia, as well good relations with Iran.

Historically, it has also supported efforts of entities such as Hamas and Syrian rebels. In 2013, it also became the first nation to allow the Taliban to open up an office in Doha, effectively recognising their rule. Additionally, it has also raised its voice time and again against the dominating shadow of Saudi Arabia at international forums, as well as through the independent minded and slickly produced Al Jazeera news network, which is based out of Doha. This isn’t the first time that Qatar has been diplomatically given a kick in the butt. Several countries moved to break relations with them in 2014 as well, but not as drastically as what has happened right now.

So what triggered this ban? Well, a number of factors.

The most prominent were statements released on behalf of the ruling Qatari Emir that were complimentary of Iran and Israel. Qatar claims that this is propaganda and that their official news agency was hacked. Another trigger was the US President Donald Trump’s visit to Saudi Arabia to close a $300 billion weapons deal under the guise of an Islamic tolerance summit. President Trump singled out Iran as a state sponsor of terrorism. Qatar enjoys cordial relations with Iran due to shared interests and was critical of this directly with President Trump in Riyadh as well as their news agency.

As an immediate effect, Qatari diplomats, as well as tourists, were ordered to leave their host countries as soon as possible. Qatar was also kicked out of the Saudi-led alliance against Houthi rebels in Yemen due to their alleged double-timing the coalition along with the Islamic State (IS) and Houthi rebels.

Flights of Qatar Airways across the Middle East have been grounded, severely hampering the airline. Residents of Qatar have been stocking up on groceries given the fact that the only land border with Saudi Arabia has been closed. QIA investments across the globe may take a hit as well if the Qatari economy is stalled due to sanctions. While there has been no official word from the FIFA organisation, the 2022 FIFA Football World Cup scheduled to be played in Qatar is also under threat of being removed.

In the murky world of geo-politics that still holds on to its colonial past, a prolonged ban on Qatar may not be in the interest of anyone involved. It may initially hurt Hamas and Hezbollah, who had been overtly and covertly supported by Qatar, but history tells us that these organisations are just two heads of a multi-headed hydra and suffocating one head will only produce more elsewhere. It also brings back the US influence into the region.

Unrest in the Middle East is often attributed to US meddling in the region. The events of 9/11 are directly attributed as a protest to US bases on Arab soil. The fact that President Trump signed a multi-billion dollar arms deals in Saudi Arabia has only stoked fears of a Sunni hegemony in the region. The fact that Doha is home to a US Central Command Base also means that it can’t be isolated for too long. For the Middle East in general, infighting between the Muslim countries is detrimental to all parties involved. It also takes away the focus from Israel leaving them free to act as they please.

If this ban continues, there are chances that Qatar will move into the Iranian camp even more. Given it’s prominence in the global media, it will come out swinging against pro-Saudi states. In a search for new allies, Qatar may also look outside its immediate region.

While Iran is the obvious choice, Turkey is another candidate that is willing to side with Qatar. Yesterday, Turkey threw its support behind Qatar, with officials saying it could fast-track troop deployment and provide crucial food and water supplies to the Gulf Arab country. Furthermore, Turkish President Tayyip Erdogan has said that isolating Qatar would not resolve any problems. Erdogan, who has long tried to play the role of a regional power broker, said Ankara would do everything in its power to help end the regional crisis.

Fortunately, Pakistan has remained neutral so far. While it extends all the support to the kingdom, it has also not cut any ties with Qatar. Reasons include the balance of ties with Iran, the high number of labour that is exported to Qatar and the fact that Qatar provides a large amount of LNG to Pakistan.

Pakistan, on the other hand, provides tactical logistical and military support to Doha as needed. Pakistanis also provide a high contingent of travellers to Qatar Airways. On a lighter note, as the Panama scandal has shown, Qatari princes also serve as alibis for covering questionable sources of funds by Pakistani politicians.

In conclusion, this is most likely just a power move by Saudi Arabia. Qatar may have allegiances to dubious organisations, but geographically speaking, it seems incredulous that it harbors such organisations on its soil. Cutting relations with Qatar will only rile their leadership further and they will only increase their media savvy attacks on Saudi Arabia and all those that have joined forces against them.